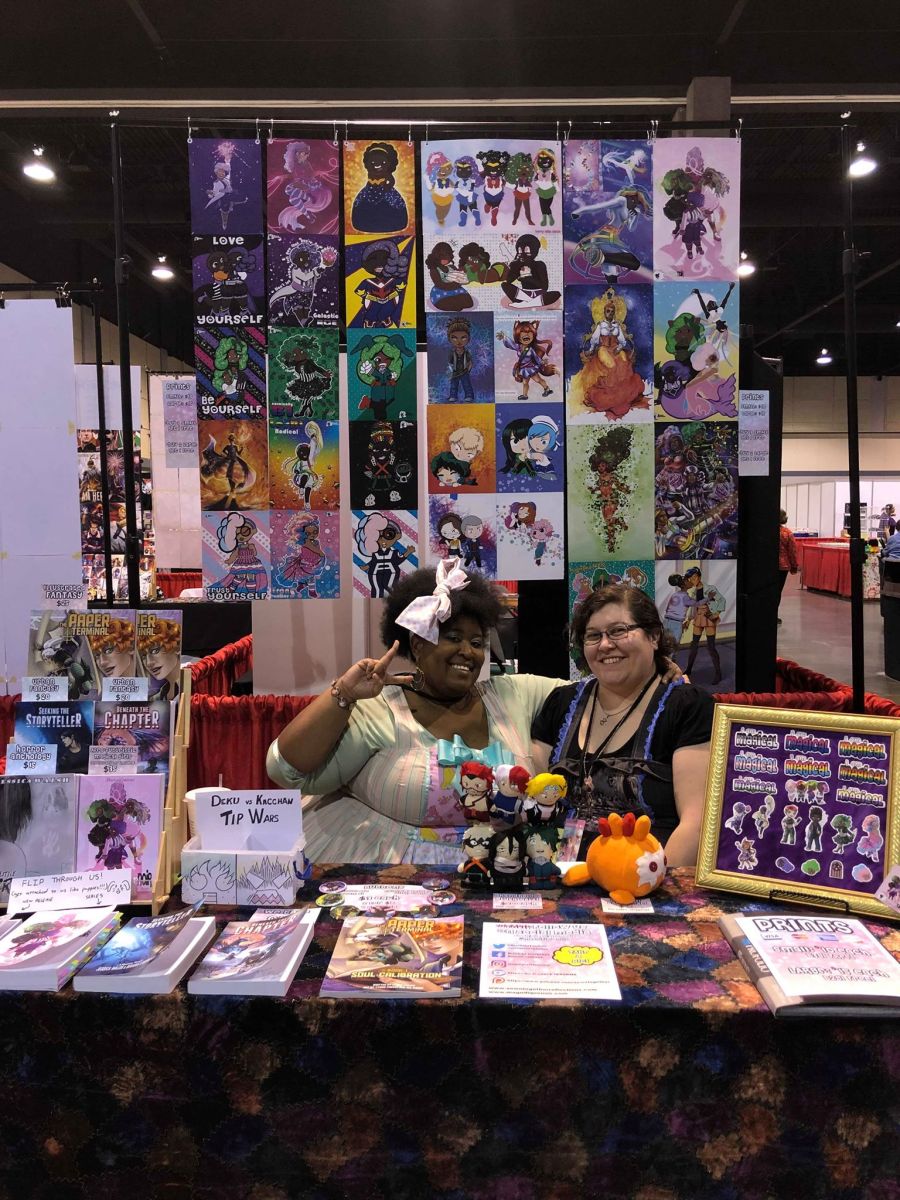 My wife and I at our artist alley table.

I’ve been going to conventions since 2002 and, throughout the years, have gone from “I’ll attend 1 or 2” to “This is like going to a family reunion twice a month throughout the year.” Conventions are where I first met my wife (in person, we’d been writing fanfic online for nearly a year beforehand), where I really embraced my sexuality, where I started speaking out more, and where I started promoting my book series. Conventions have become a business for me thanks to artist alley and guest invites, which makes my kid self all kinds of giddy.

So when cancellations started hitting in March it wasn’t just a loss of my comfort zone, it was a cause for financial panic for my wife and I’s small business. We had a lot of plans this year, a lot of inventory ordered ahead of time, several hotels booked in advance, artist alley fees paid, and guest contracts signed. After returning home from not one, but two canceled shows we were on the road to, we had to ask, “Now what?”

We—and the convention-going community as a whole, especially our fellow artist alley peeps—hoped that things would be okay come summer, then fall, then winter. Deep down, though, I knew that the season was over for 2020. Having that many people gathered in a space for a weekend was too risky, so the question became, “What about 2021?”

Well … here’s some thoughts … assuming we even get a con season 2021 since folks keep going out recklessly. Seriously, you went on a CRUISE?!

In order to try and get things going in 2021, we’ll see events change dates in the hopes of things being okay by that point. Examples of this are C2E2 and Emerald City Comic Con, two events that tend to be in the beginning of the year that have now moved to the end of the year. Hopefully, by then, the pandemic is under control in a way where hosting a gathering isn’t cause for panic. If it isn’t, it could potentially give events time to set up venues in a way that’s more crowd controlled (though, hopefully, this is put into action regardless, as having so many people on top of each other fresh out of a pandemic wouldn’t be a good idea).

For the events that can’t change their dates, they’ll most likely move to 2022. This just happened with Katsucon, which is usually hosted in February. Much like the cancellations of this year, it’s going to take time to see who will cancel—as contracts have already been signed and dates have been announced for 2021 I’m not surprised to see early 2021 events already canceling, but later ones will take a minute. While it’s odd to see events posting about hotel room blocks for next year (especially since the chances feel so slim) they kinda have to work under the assumption that they’ll be happening next year until the city/convention center/hotel tells them otherwise.

If any kind of convention is gonna come back first it’s gonna be that local one that hasn’t grown to the behemoth size of the likes of San Diego Comic-Con. Larger events may also start limiting the number of attendees and, honestly, probably should. We’re not at all ready to do 100K+ attendees in 2021. At the very least, there should be a limit of how many people can be in a space at a time, or potentially a way to have events more spread out throughout the area (ie: Anime Central takes place in the convention center AND the neighboring Hyatt Regency). This would probably mean waiting in line to get into places like the vendor hall to shop and spaced out seating in panel rooms.

Even if we’re “normal” by 2021 some form of social distancing should still be maintained for a while.

Even if an event can’t happen next year, there’s a chance that it’ll switch to online. We saw a number of conventions do this and new events emerge (like FUNimationCon). Sure, it’s not the same as in-person interactions, but there were definite advantages. Online events gave more people access to conventions and guests in general since all they had to do was go to a computer. It also lets events have a bigger guest lineup since there was no worry about travel, lodging fees, and securing a venue.

That being said, if we are going to get more online events, I’d love to see more diversity in convention guest lineups. One thing I’ve heard with events in the past is the inability to afford a certain number of guests, but with online as an option, that should open the door to more opportunities.

Online events also have the opportunity for some truly unique panels. Imagine hosting a cosplay workshop without having to get all your stuff to the con hotel and, instead, recording straight from your workspace. Imagine events being able to have more artists since there aren’t a limited amount of tables. Instead of having to rush and put together an event (as some had to do when they were suddenly canceled), there’d be more time to dedicate to creating it. Though, honestly? Some of these online events were amazing even with the short notice with cancellations.

Will be required, or at least, I hope they will be. It’ll take time to have a vaccine for COVID and get it out there to the point of being able to walk around maskless. At the very least I hope we adopt the principle of wearing a mask when you’re sick.

Social distancing all around

I mentioned spaced out seating in panels rooms, but this should also extend to things like artist alley tables, autograph lines, and even the amount of people you can have in a hotel room. I too graduated from the school of “pack the room with as many people as possible” but that will have to stop, and hotels will probably be stricter in enforcing it. Even if things are “normal” by December 2021, I would hope that events try and maintain social distancing.

Since things will have to be spaced out more, there’s a chance that conventions will have to accept fewer artists/vendors to account for the change in space. This won’t be the case for all conventions, but those pictures we see of tables jammed together probably won’t be making a comeback for a while (if ever). The spacing won’t be the only thing making it harder to get a table, a lot of the artists/vendors will be rollovers from the previously canceled shows. Yes, I’m sure some got refunds, but others (like me) just moved to 2021, so the application process for new artists will be more limited.

Artists, please keep this in mind when applying. It’s easy to be down on yourself if you don’t get into a convention, but remember, a lot of these tables are already spoken for to make up for 2020. Honestly, 2020 is not the year to judge yourself on.

Remember how I said that conventions are a space full of hugs and love? Yeah, that’ll probably have to slow down a tick. This includes those kinds of moments with convention guests, too. I do think we’ll reach a point where we can glomp again (please ask first, I beg you), but in 2021? That might be a bit too soon. Honestly, a lot of things get touched during a convention, particularly merchandise, so we’re gonna have to suppress the urge to grab that cute plush, hug it, then put it back on the shelf.

The bottom line is conventions will take a while to return to “normal,” particularly the bigger shows that have hundreds of thousands of attendees present. Out of all the things to return to form, these kinds of events will probably be last on the list. It’s going to take time for the country to be able to host gatherings, let alone ones that take up entire convention centers and hotels.

While the convention scene will have to make some adjustments for 2021 (or wait until 2022), there’s still plenty of ways the community has worked to create that kind of vibe. Online events. Various hashtags. Cosplay challenges. Silly “choose your four” tweets and series rewatch.

It might not be the same, but it is, at least, a bright spot until we can safely gather again.