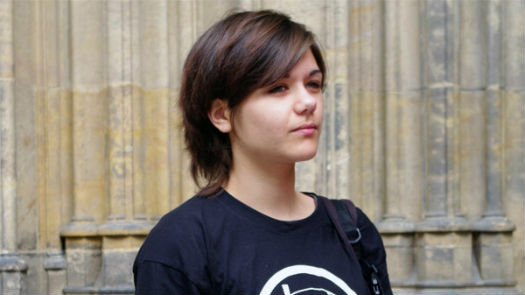 Back in 2009, Amelia Andersdotter, then 21 years old, ran for a seat in the European Parliament as a member of Sweden’s Pirate Party — and that June, she won. Now 24, Andersdotter is finally about to take her seat after years of bureaucratic delays, becoming the second member of the Pirate Party to become a MEP and the youngest person ever to do so. Among the major parts of her platform: a united Europe and a focus on telecommunications.

As you may have imagined, the Pirate Party’s goals concern reforming copyright laws, specifically allowing p2p networking and file sharing, and doing away with patent laws altogether:

Culture and knowledge are good things, that increase in value the more they are shared. The Internet could become the greatest public library ever created. The monopoly for the copyright holder to exploit an aesthetic work commercially should be limited to five years after publication. Today’s copyright terms are simply absurd. Nobody needs to make money seventy years after he is dead. No film studio or record company bases its investment decisions on the off-chance that the product would be of interest to anyone a hundred years in the future. The commercial life of cultural works is staggeringly short in today’s world. If you haven’t made your money back in the first one or two years, you never will.

As for the patents, the Pirate Party (which was formed in 2006) specifically cites the pharmaceutical industry as the reason why patents should be abolished completely. The third major part of their platform involves doing away with overreaching government surveillance.

For her part, Andersdotter says that more needs to be done to regulate vertical integration in the European telecommunications industry, but that the current net neutrality laws in the Netherlands are a good example of what individual nations are already doing right. She also hopes that her victory will help the Pirate Party to gain recognition — and seats — in the national parliament:

“… One of my hopes for the future is that the PP will be represented in all the national parliaments of member states so that we can hold member states kind of accountable more for what happens in the EU.”

It’s not that lofty of a goal; Germany’s Pirate Party was polling at 10 percent in late October. But is this something that could make it to the United States? Let’s take a quick look at the state of our two-party political system … and, no. No, there will probably not be a good chance for an American Pirate Party, at least not right now. Unless, possibly, SOPA/Protect IP passes.