What the Deal Was With Tumblr Today (And A Few Other Sites): The Protect IP Act 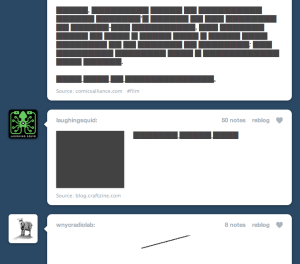 To the left is a screencap of Tumblr from earlier today, and you’re probably curious to know what it’s about. Well, we’re here to tell you, and you’re not going to like it. And not like “Kristen Stewart might be in Akira” “not like it.” Like “the United States government is taking cues from Iran and China and wants to put people in prison for five years for linking to a copyrighted site” “not like it.” In the name of protecting “prosperity, creativity, entrepreneurship, and innovation,” there is a bill currently being debated in Congress, the PROTECT-IP Act and its House version, the Stop Internet Piracy Act (SOPA), concerning censorship of the internet that intends to leave legal windows open to prosecute regular users like you, me, and your Aunt Ethel, who just wanted to show you what her cat was doing on YouTube and happened to be playing the soundtrack to Phantom of the Opera in the background. This is a matter of taking freedom of expression out of the hands of the people and giving it to corporations, who can then turn to all their consumers and say, “We have PR firms and advertising agencies to tell people about our TV show/album/movie — stop linking to it or we’ll have you pay for it.” And the worst part is that anyone who tries to read this thing in order to better understand it will find themselves even more confused — and possibly in serious trouble.

This bill actually caught me off guard when I first read about it, thinking “They can’t do that. Surely, someone is blowing this out of proportion.” And then I read about more, and then I started reading the actual House Resolution. (The Senate bill is oddly all crossed out, as if it was censoring itself, because maybe there is a PROTECT-IP movie in the works by a major studio? If someone understands why all the strikethrough, I will amend this post with the explanation.) Like most Congressional bills, this is a hard one to get through, intentionally difficult to understand by laypersons, and one of those things that rank-and-file Congressional representatives might just pass off as something like outlawing Napster and put their signature on, not realizing that this bill really amounts to restrictions on free speech for regular people — like their own constituents, for example, and also: them — and is not unlike the efforts to control what people can see on the internet that are going on in countries like China and Iran. China and Iran.

The intentions are not bad — the bill is meant to protect the properties of producers of entertainment — music, television, movies, etc. However, to say it plans to overreach would be putting it politely. What it seeks to do, however, is to give corporations the power to take down sites the coporations think infringe on their copyrighted properties. Yes, just sites. Sites with domain names they don’t like, sites with content they don’t like — and people who distribute or link to sites or content they don’t like. That includes the simple act of sharing something on Twitter, Facebook, or Tumblr. For example, if the BBC wanted to, they could go after the person who made this:

And they could claim it contains copyrighted material and the creator of this gif is infringing upon the BBC’s rights. And then, they could also shut down the site on which it appears and go after every person who shared it. You know, all the people listed here, all of them unlawful disseminators of copyrighted material. This would reach as far as someone posting a video of themselves singing a popular song at karaoke night on Facebook (often by way of YouTube) to, as I said before, someone who takes a video while copyrighted music plays in the background. From Fight For the Future:

It’ll give the government new powers to block Americans’ access websites that corporations don’t like. The bill would criminalize posting all sorts of standard web content — music playing in the background of videos, footage of people dancing, kids playing video games, and posting video of people playing cover songs.

As for the whole “prison” thing, I’d like to tell you that’s just hyperbole, but, insanely enough, it is not. From American Censorship, under SOPA:

It becomes a felony with a potential 5 year sentence to stream a copyrighted work that would cost more than $2,500 to license, even if you are a totally noncommercial user, e.g. singing a pop song on Facebook.

This is garnering a reaction from across the political spectrum, proving that this is beyond partisan politics — this affects everyone who uses the internet, happens to be a fan of anything, and likes to tell people about it on the internet. It will start with site shutdowns, and maybe no one will go to prison or even pay a fine. But with the passage of this bill, there would be nothing stopping corporations from finding someone with a high-quality, DIY tribute video on YouTube and bringing them to court, where the government will tell that person: “Under PROTECT-IP and SOPA, you are a criminal for using this content without permission. And now, you will be sentenced for your crime, which you can’t really deny, because it was on the internet and seen by all these other users.”

Here is a video to better explain everything:

There is already an uproar on the internet about this, which brings us back to Tumblr’s temporary demonstration of self-censorship, and that will surely be a part of the Congressional debates. What you can do — as a person who is directly at risk — is contact your Congressional Representative. Tell them this bill is way too much. Tell them that no, “corporations are not people, too.” Tell them that this bill stifles free speech, despite what it says in the bill, because while it protects the intellectual property of gigantic corporations (and yes, small, independent businesses), it will have an undeniable chilling effect on the vast majority of regular internet users, and, as said in the video above, will actually make the internet less safe on a structural level. And if you have a web site, you can spread awareness by using some simple codes to put this dire graphic at the entrance to your site: 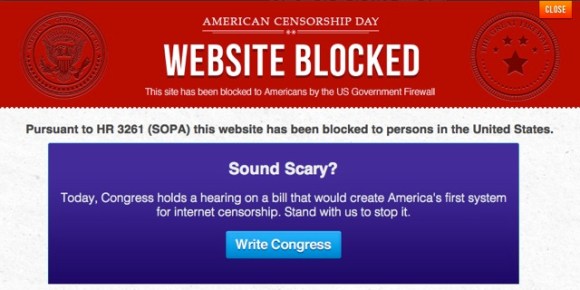 American Censorship also contains the codes used by Tumblr to make their site appear that it’s been censored by the government.

This is exactly why the First Amendment was created. Could anyone have predicted the internet in Revolutionary Era, thinking that it would become so easy to share things that people had created without those people ever seeing a profit (despite their already huge profits)? No — but they probably might have agreed that something with a lot of power cannot abuse it and cry “free speech.”