ALL WE ARE SAAAAYIIIING, IS GIVE PETER A CHAAAAAANCE to hang out with Captain America. 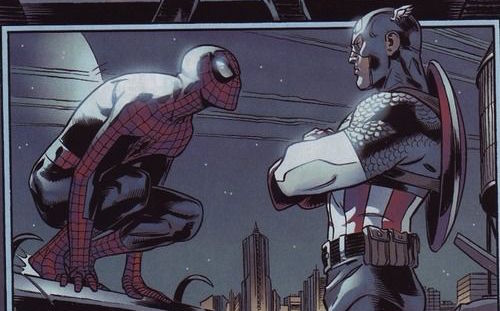 The hacking of reams and reams of internal files, communications, and contact information from Sony Entertainment could be part of the plot of a Hollywood navel-gazing drama, or part of an intricate web of consequences in a Neal Stephenson novel, but instead it’s… actually happening.

And among the depressingly real consequences and revelations we’ve gotten from the release of this information (like proof of the lack of diversity and egregious pay gap at the top levels of Sony’s organization, or how hundreds of low-level Sony employees are now at greater risk of identity fraud thanks to having their social security numbers publicized), the release of numerous Sony films before their premiere dates, and the possibility the attack was orchestrated by the government of North Korea in retaliation for Seth Rogen’s The Interview… there’s now leaked emails showing just how close Disney/Marvel and Sony were to working out a deal to allow Spider-Man to appear in the Marvel Cinematic Universe.

Hackers have released emails between Sony Pictures co-chairman Amy Pascal and various other high-level Sony and Disney executives, in which they discussed the possibility of returning control of the Spider-Man franchise to Marvel. Control, but not ownership. From an exclusive story on the Wall Street Journal:

Disney also indicated to Sony that they’d be interested in having Spider-Man appear in the third Captain America movie, which we now know will be based in some way on the Marvel’s “Civil War” plotline, one which sees Peter Parker torn between his two older superheroic role models of Iron Man and Captain America. Unfortunately, at some point… negotiations fell through, and we won’t be seeing that happen any time soon.

Instead, according WSJ sources, Sony is gearing up for a “Spidey summit” in January to figure out the future of the franchise, which may include an animated Spider-comedy from Chris Miller and Phil Lord, the folks behind 22 Jump Street and The Lego Movie in addition to the practically innumerable spinoffs and villain based films that the company has already announced are in store for the character.

On a scale of 1 to Hulk, how pissed are you right now?