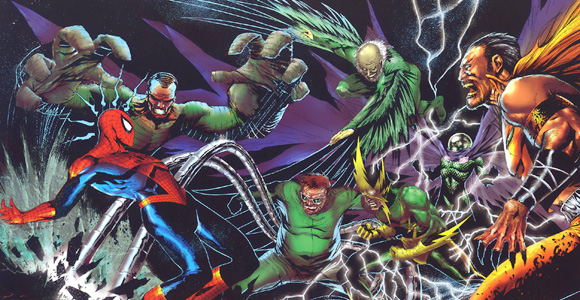 Sony has decided cashing in on only Peter Parker, when they hold the rights to Spider-Man’s entire story, was kind of silly. To wit, they’re branching out. The studio announced they’ll be moving forward on not one but two feature films based on Spider-Man’s rogues. One will be Venom, the other, Sinister Six.

Alex Kurtzman and Roberto Orci, writers of “The Amazing Spider-Man 2,” will co-write “Venom,” with Kurtzman tapped to direct. “Cabin in the Woods” mastermind Drew Goddard will write “Sinister Six,” with an eye to possibly direct. (Goddard is currently working with Marvel Studios to bring the Netflix series “Daredevil” to life as writer/director and showrunner.) “Fringe” veteran Jeff Pinkner and “Now You See Me” writer Ed Solomon round out the five-person brain-trust tasked with helping producers Avi Arad and Matt Tolmach and director Marc Webb to expand Sony’s “Spider-Man” film universe.

The villainous team originally consisted of Doctor Octopus, Electro, Sandman, Kraven the Hunter, Mysterio, and Vulture. Venom, Doctor Octopus, and Sandman previously featured in Sam Raimi’s Spider-Man films, while more of the Rhino and Electro will be making their debut in the upcoming Amazing Spider-Man 2.

Arad and Tolmach said in a statement, “With more than fifty years’ wealth of stories in the comic books to draw upon for inspiration, the Spider-Man universe is truly boundless; in addition, the Spider-Man comics have the greatest rogues gallery of any series, and to have the chance to explore that on film is truly thrilling. That is what Alex, Bob, Jeff, Ed and Drew will do in this unprecedented collaboration, and we’re excited about the directions they are taking the character and the world.”

No plot details have been released as of yet nor has there been confirmation of any past or current actors in the villain roles to continue them in the spin-offs. Though it’s likely Jamie Foxx and Paul Giamatti would at least continue their parts if Sony is trying for a Marvel-esque shared universe.