"Has that been up there the whole time?" 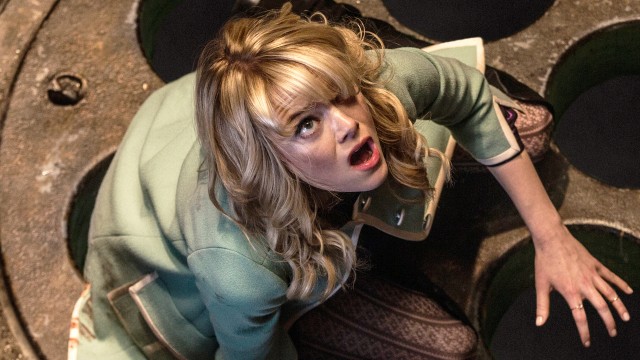 We open on a Sony boardroom. A bunch of executives with their pinstriped shirt-sleeves rolled up are sitting around a table covered in Greg Land drawings.

“Okay, gentlemen,” a gruff man with a cigar in his mouth stands in front of the table; imagine someone sort of like J. Jonah Jameson, but not actually like him at all. “We got a lot of good press from announcing that lady superhero picture, but now Warner Brothers and Marvel Studios have got their own flicks on the books, too, so we’ve got to step up and actually make this sucker or we’re gonna get creamed. What have we got so far?”

“Well, we want it to tie into The Amazing Spider-Man,” another man notes.

The executives look around at each other.

“We need more than that,” the gruff man says. “Any ideas on who’s gonna be our lead? Because I haven’t heard of any of these broads in the comic books except for this here blond one, and I’m pretty sure she kicked it in our last movie.”

“What about a team-up?” A third guy asks. “Like the Avengers, but with only women. We get Black Cat, Silver Sable, some kinda Spider-Girl, maybe even a Spider-Woman or Silk, and have them do a bunch of Charlie’s Angels poses. Nerds’ll eat that shit up.”

“Are you suggesting to me,” the gruff man says, his eyes squinting, “that we take a whole bunch of characters our audience probably only has a passing familiarity with, if they have any at all, and force them to compete with one another for a limited amount of screen-time in a convoluted and complicated way?”

“Great, because that’s our bread and butter here at Sony’s Spider-man division! But now here’s the real question—” the gruff man leans forward, balancing himself agains the table. “The real question is, who’re these dames gonna be goin’ head to head with?”

Finally a hand shakily floats upwards, and the group turns to face a nervous intern at the end of the table.

“Well, my sister is on the Internet a lot,” he stammers. “And she’s always talking about how much she hates this one guy called the Glass Ceiling.”

“THAT IS PERFECT!” the entire boardroom jumps up and yells at once in loud, spontaneous unison. The ground begins to quake, and the foundation of the Sony building collapses under the weight of their collective genius.

Anyway, I’m no Devin Faraci of Badass Digest, but I’m pretty sure that’s how it happened.

Then again, if Sony decides not to go with Spider-Man: Glass Ceiling as an actual title for an actual movie, we here at The Mary Sue suggest the following options: