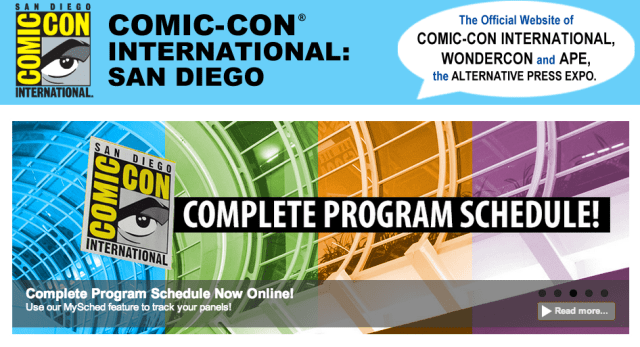 I covered this situation in detail just a few months ago on The Mary Sue after a fan petition called for a full, and more visible, harassment policy from San Diego Comic-Con. Director of marketing and public relations David Glanzer responded by saying their policy was deliberately broad and that if they put up signs denouncing harassment, the media might think there’s a harassment problem (we reiterate: there is!). As it turns out, the convention sent out an email to attendees yesterday with the subject line “Important information for attending Comic-Con International 2014” and the second item down is “Code of Conduct/Anti Harassment Policy.” That’s the good news – but there’s also some bad news.

It’s fantastic this e-mail was sent out to customers just before the show next week. I’ve previously suggested all conventions print their anti-harassment policies on tickets and have it automatically emailed along with ticket confirmation in an effort to ensure everyone sees it. It’s also nice to see SDCC realizes a more direct approach is a step in the right direction. They write, “Almost all of this information is located on our website, but we know you are busy getting ready for Comic-Con so we wanted to highlight some important things for you.”

Here’s some of that important information from the email:

For any emergency that requires immediate response, please use a white house phone and dial 5911 as this will expedite emergency response to the Convention Center.

Attendees must respect common sense rules for public behavior, personal interaction, common courtesy, and respect for private property. Harassing or offensive behavior will not be tolerated. Comic-Con reserves the right to revoke, without refund, the membership and badge of any attendee not in compliance with this policy.

Persons finding themselves in a situation where they feel their safety is at risk or who become aware of an attendee not in compliance with this policy should immediately locate a member of security, or a Comic-Con staff member, so that the matter can be handled in an expeditious manner. If your safety is at risk and you need immediate assistance you may also use a white house phone and dial 5911.

Security may be contacted by visiting our Show Office in Lobby C. A Comic-Con staff member will be in the office during public hours.

The word “harassment” being used in the second item down is definitely a good thing but big steps are still needed before many attendees feel Comic-Con is doing enough to protect them.

But, as I mentioned, there is some bad news. This vital information for attendees is still only listed as “code of conduct” on their official website and has not been given greater visibility there, nor has it been expanded to make it any clearer. “It’s a very broad policy, and it’s deliberately made to be broad,” Glanzer told Comic Book Resources back in May. “My concern is, the minute you start pointing out the types of harassment you don’t allow, does that imply other types of harassment are allowed? I hope nobody would make that leap.”

Also, it’s important to note while this message was sent to regular ticket holders and professional attendees it was not sent out to press and that’s a huge omission. People accepted as press for conventions have been known to be the biggest offenders (professionals aren’t immune either) and comic creator Lea Hernandez has desperately been trying to get Comic-Con’s attention specially after seeing Mediocre Films’ comedian Greg Benson harass cosplayers on camera (Marlene, aka ilikecomicstoo has documented this pretty well) with no repercussions. It all makes this next part of the email that much more interesting to us:

Firstly, as a journalist I’m not even sure what they mean by a “non-news organization” and I doubt regular attendees will either. Secondly, this sounds an awful lot like “watch your drink at a party.” While it may be common sense, it’s more important to tell the offenders not to harass rather than tell possible victims how to avoid it. Also, speaking from personal experience having done many interviews at conventions, I can count on my hand the number of times I’ve actually been asked to sign a release. Being asked to sign one isn’t necessarily a sign of anything and if there is no release form, then what? If you do want to include this type of warning to attendees, it may be more beneficial to tell them to look at the badges of those asking for interviews as well as getting their contact information (business cards, etc). But again, a strong and widely-visible stance on anyone at the convention harassing anyone else is the first step.

Another thing to note, further down in this email is this section of “important information.”

Remember recording of footage on the screens during panels is prohibited. This includes Google Glasses. You cannot wear Google Glasses during footage viewing in any program room. If your Google Glasses are prescription, please bring a different pair to use during these times.

Also, please turn off your device (phones, tablets, etc.) screens and put them away during the screening of panel footage. Not doing so interferes with everyone’s viewing quality and causes security to think you’re recording the clip.

Yes, while it’s taken decades for Comic-Con to put their code of conduct on the website and discuss the issue of harassment publicly, the very first year it’s possible for the general public to be wearing Google Glasses at the convention they’ve made sure to include them in their no-recording policy (and in no uncertain terms). You see, piracy is a very important issue.