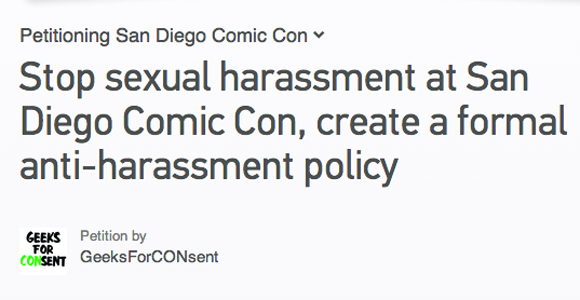 Last year, we were compelled to look into Comic-Con International in San Diego’s harassment policy after a gallery was posted online by a member of the press who took photos of attendees’ posteriors without their knowledge. It was something we assumed, as the largest convention in North America, would be front and center on their website. Turned out, it wasn’t on their website at all but a small paragraph in their 200+ program guide handed out at the event. While harassment at conventions was an important topic to a lot of fans before this incident, it has gotten even more attention throughout the year. That brings us to a petition put together by Geeks for CONsent asking for a “formal anti- harassment policy” and more, but a representative from the convention says they already have what the petition is asking for. We took a closer look.

David Glanzer, director of marketing and public relations for Comic-Con, WonderCon, and Alternative Press Expo, was interviewed by Comic Book Resources when Geeks for CONsent’s petition had just over 1,200 signatures (it’s now just over 2,000). He told them he thought the petition indicated Comic-Con didn’t have an anti-harassment policy at all (The petition reads: “Comic Con has refused to create a full harassment policy.” Emphasis ours.)

“Is it specific to one group? No, it isn’t,” Glanzer told CBR. “It’s a very broad policy, and it’s deliberately made to be broad. Comic-Con actually does have a policy, and it’s not only on our website, but it’s printed in our events guide, that’s handed to the attendees as they come to the show.”

That’s interesting. As of our piece from July of 2013, the policy Glanzer is referring to, their “Code of Conduct,” was not on their website. We started a list at the end of that post with conventions who had a clear and easily found harassment policy, so how clear and easily found is Comic-Con’s now? We took a tour of their website and documented the journey with screenshots of each stop.

Interestingly enough, CBR’s Albert Ching asked if there was room to be more explicit with their policy, which is what the petition asked for. “I think if you mean ‘clearer,’ [you mean] make it more specific. That certainly is something we could do, but I have to be honest with you: My concern is, the minute you start pointing out the types of harassment you don’t allow, does that imply other types of harassment are allowed? I hope nobody would make that leap, but as a gay man, I wouldn’t want to see harassment codified against a certain element by omitting orientation, or gender, or race, or religion, or disability,” Glanzer said. “So our policy not only mentions the fact that harassing or offensive behavior won’t be tolerated, we also let people know that if they find themselves in a situation where they feel their safety is at risk, that they should report it. I think we’re trying to get ahead of the curve on some of these issues.”

To that I say, you can never be too specific. If an organization is really worried about loopholes, that’s where legalese comes into play: “including, but not limited to X,Y,Z.” Are conventions afraid to put the word harassment front and center for fear people might assume it’s a regular occurrence at their event rather than a step toward prevention? It’s certainly the impression I got when reporting on Fan Expo Canada’s “cuddle a cosplayer” controversy and it’s the clear idea Glanzer gives when asked about making policy more prominent at Comic-Con:

I will tell you, though, that because we’re really an international show, and have 3,000 members of the media, I think the story would be harassment is such an issue at Comic-Con that they needed to post these signs around there. Now, people within the industry, and fans, know that isn’t the case, but the general public out there, and I think the news media, might look at this as, “Why would you, if this wasn’t such a bad issue, why do you feel the need to single out this one issue and put signs up about it?” I think that’s a concern.

Glanzer seems to be saying posting signs about harassment would make it seem as if there’s a harassment problem which in turn, is implying there is no harassment problem. That is the opposite of true. And the message I’m hearing is they think taking a strong stance on harassment will make them look bad in the public’s eyes. That does not make me happy as a journalist or a fan attending their convention this year. Again, it’s always better to do more, rather than less, to make your attendees feel safe, who cares what the general public thinks? More the point, convention harassment is a legitimate problem so perhaps making more than people in the industry aware of it will spur an even greater change for the good. Glanzer seems to be prioritizing possible bad press over the stated wishes of actual attendees.

Ching brought up Emerald City Comicon’s huge steps toward preventing harassment with their “Costumes Are Not Consent” posters and larger message to the community.

That’s something that was definitely embraced, people were happy to see that. If there is a perception there, fair or not, that Comic-Con isn’t making its harassment policy clear enough, is there an opportunity to broadcast that louder and further at the convention itself, or leading up to the show?

I guess anything is possible. We have a police command post in the lobby. I’m not suggesting that other conventions should follow suit and do the same thing. I think what works right for our convention may not apply to another convention. Likewise, I think what works at other conventions might not necessarily apply to ours. I don’t know. I think we’re comfortable in the policy we have. I think we’re comfortable in the response time of any complaints that we do have, and while we’re never happy that there are any complaints, or any people feeling that they’re being harassed, I think the precautions that we have, and the elements that we have in place have made it an issue that I think we certainly are addressing.

One of the things that I also don’t want to do is to challenge people, either. San Diego’s a huge event. My fear, too — and for a smaller show, I don’t know if this would be the case — I just don’t want to bring up an issue that may create a situation where someone’s saying, “Oh, maybe I can push the limits. Maybe I can see how far I can go.” Sadly, with 130,000 people, it’s like a small town. I think we have a good policy in place. That policy is on our website, that policy is in our events guide. Our staff and security knows what to do if somebody is approached, and right now it seems to be working. If it seems not to be working, we certainly will try to mitigate that.

When pressed again for Comic-Con’s opportunity to be clearer in the wake of the petition, Glanzer said, “I think the petition, and I may be incorrect in this, but I think the petition calls for Comic-Con to have an anti-harassment policy, and we do. If there are additional specifics that people have, I guess we would address that as it comes up. Our policy is deliberately broad, which we feels allows us more leeway in enforcing that policy.”

Here’s the full list of specifics Geeks for CONsent asked for in their petition:

We’re asking Comic Con San Diego to include the following in a formal anti-harassment policy:

–A harassment reporting mechanism and visible, easy to find on-site support for people who report harassment;

–Signs throughout the convention publicizing the harassment policy and zero-tolerance enforcement mechanisms;

–Information for attendees on how to report harassment; and

–A one hour training for volunteers on how to respond to harassment reports.

There is no harassment-specific reporting mechanism on their website, though Glanzer points to their regular security staff to report on-site. He’s against signage because it would make it look like harassment is a problem (we repeat, IT IS). [Edit: We were sent a link to a Comic-Con volunteer who shared their story of harassment.] They also ask for information on how to report harassment, the “code of conduct” says “locate a member of security, or a staff member.” And training for volunteers, which was not brought up in the interview.

Has Comic-Con failed in providing a harassment policy? Last year I would have said yes (putting something that important in the middle of a 200+ document most attendees won’t read isn’t enough), and while posting the “code of conduct” on their website (whenever they did post it) is a step in the right direction, as a leader in the convention circuit, they can absolutely do more for their paying customers. In a climate where journalists are threatened with death and rape for making comic book criticism, famous creators speak out about vendor’s misogynistic wares, and major comic book websites overhaul their entire commenting system to foster a safer community you’d think taking a stronger stance on harassment would be nothing but a positive move. I should also note there is no message specific to members of the press about harassment, which is an equally problematic issue we’ve seen at Comic-Con, New York Comic Con and other events.

Glanzer told CBR, “We want to make sure that the people who attend Comic-Con are as safe as they possibly can be. We spend a great deal of time, effort, and I’ll be honest with you, a great deal of money to try to ensure that. Again, anyone who feels unsafe — even if it’s one person — is clearly one person too many.”

Mr. Glanzer, more than one person, at this very moment, does feel unsafe with your current strategy toward harassment. Two thousand even signed a petition to that effect. I think it’s time to reevaluate how you look at your policy.