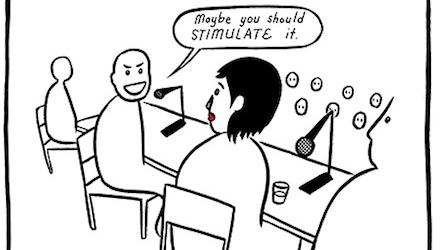 Two days ago cartoonist and comics professional MariNaomi published a piece on xoJane entitled “It Happened to Me: I Was Sexually Harassed Onstage at a Comic Convention Panel.” In it she describes a truly awful experience: accepting an opportunity to speak on a panel about queer comics, and enduring another panelist with a “bigger” career in the industry than her questioning her bisexuality, expressing a distracting sexual attraction to her, and offering a veiled sexual proposition, all during the course of the panel. MariNaomi chose to anonymize the identity of her harasser with the initials DB, but Scott Lobdell, writer of the New 52 titles Red Hood and the Outlaws, Teen Titans, Superboy, and Superman, today stepped forward to identify himself and apologize.

You can (and should) read MariNaomi’s story in her own words and pictures at xoJane, but in brief sentences: Lobdell was the only straight person on the panel. He excused losing his train of thought on being distracted by MariNaomi’s lipstick, grabbing her stained drinking glass as a visual aid for the audience. When her microphone drooped on a lose hinge, he made the joke illustrated by MariNaomi at the top of this article. After recounting one story from her graphic memoir, of innocently mistaking her first attraction for a woman as a food craving, he asked if she had then had an orgasm while eating. After receiving a response in the negative, he implied that she must have mistaken her sexual identity, and really only be into men. He asked her if he had a chance of appearing in a sequel to her first book, a memoir of her adolescent sex life. After the panel, when introduced to her husband, Lobdell became immediately contrite and apologized… but only to MariNaomi’s husband. During the after panel group shot, he made a racist remark about her Asian facial features.

Lobdell offered his apology for publication on The Beat to Editor in Chief Heidi MacDonald, who had published a righteously strident (if I may say so myself) editorial on MariNaomi’s account of the panel yesterday. MacDonald understandably ran it by MariNaomi first, and published it along with her own comments. Offering an apology for hurting someone when you genuinely felt, in the moment, that you were being charming and funny, is a tricky business. Of utmost importance is that you stress that your attempt in making jokes resulted in not-jokes, that you not rest on “well if you knew me better you’d know I was joking,” and that you affirm what was unclear from your earlier interaction: that you are aware that the person you hurt is a human being.

Lobdell apologizes “for offending a fellow comic book creator.” He says he is sad that he did not realize she was offended by his “failed attempt at humor” at the time so he could not immediately apologize to “MariNaomi or her husband,” that he is sad because he was very impressed by the candor of her work, and that MariNaomi did not deserve to be treated the way he treated her. On that last note, I think I can firmly agree. You can read the full text of his apology here, and your mileage may vary.

It’s hard to get around the fact that when Scott Lobdell met MariNaomi, he treated her as less than human. It is not okay, in any sense of the word, to jokingly say to a stranger things that many folks say with all seriousness, not to mention a stranger sitting captive in front of an audience, and expect to be taken as charming. It’s also hard to ignore that he continues to include MariNaomi’s husband in his new apology. We no longer live in a world where it is reasonable for people who are expected to play to the tastes of, for example, the young demographic that DC comics purports to be after to be ignorant of certain negative social issues. Certain negative social issues like the scrutiny and ridicule that bisexuals undergo for not adhering to either a fully heterosexual or homosexual identity; or that women are often praised first for their appearance or capacity to receive the favorable sexual gaze of men rather than their creative achievements, often doubly so for women who identify other than straight; or that women are less likely to be the targets of harassment if they appear to be associated with or “claimed” by a man, because many harassers respect a man’s “right” to claim “dibs” on a woman more than the autonomy and humanity of a woman.

That Lobdell immediately came forward with a public apology, even though her account of his behavior did not name him specifically, is a step forward from the last major male-creator-on-subordinate-female-comics-creator story to spread through the industry. Let us hope there are many more steps forward in the future.

(Top picture by MariNaomi for xoJane.)