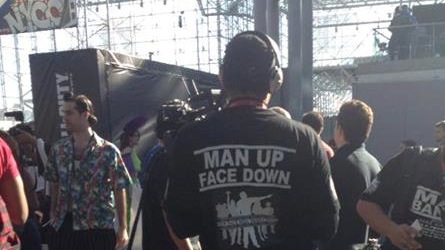 It seems like no con can go past these days without a big post on the giant jerks who went there not to have fun but to find women and make them uncomfortable for someone’s entertainment. Expected? Yes. Disappointing? Yes. Disappointing that it’s so expected? That too.

For a good masterpost on reports of organized skeevy behavior at the con, I recommend reading The Beat’s article on it, but to go in chronological order, we start with Arizona Ice Tea’s I Heart Big Cans ad campaign, which, since the company was sponsoring the biggest room of the con, was featured at the beginning of the con’s biggest panels. If you’re guessing what they mean by “cans” in their slogan, well, you’re probably right. A well-endowed spokeswoman in short-shorts came on stage to introduce a “special” video that proved to be (from Leaky News)

a two-minute PSA about how “big cans” were just awesome…

The shot that really got me, though, was the one in which [the video’s female host] attempted to drink a can of Arizona Tea. I say attempted because she did that terrible thing we’ve all done while extremely drunk and playing competitive drinking games, where you really aren’t drinking at all, but are in fact just opening the back of your throat and forcing the liquid down…

Luckily, I would say most of the audience reacted like I did, with groans and a lot of “WHAT”s and a fair amount of facepalms.

The ads were no longer appearing before panels by Friday night.

On Saturday, however, a film crew for a NYC local cable access show Man Banter made quite a name for themselves (they have since deleted their YouTube, Facebook, and Twitter accounts) by politely asking female cosplayers for interviews and then peppering them with come ons and deliberately lewd, racist questions and comments. Once one cosplayer agreed to an interview, the “reporter” simply stared silently at her chest until she placed her arms over it and challenged him, at which point he asked “So, does your costume help you get laid?” Another cosplayer was treated this scintillating conversation, where the interviewer stated he was interested in buying an “umbrella with an Asian girl” (that is, buying an Asian girl to hold an umbrella), and that “in my experience, girls who stand next to me longer than 20 seconds get a cream pie.” The group was initially reported to con security around 3:30 Saturday afternoon, but was not removed/banned from the con until Sunday.

Since then it has come out that they were using false credentials: they had applied for press passes as employees of Sirius Radio despite being completely unaffiliated with the well known company. Our Jill Pantozzi reached out to Lance Fensterman, global VP of ReedPop, for his comments on the resolution of the incident:

Jill: could you confirm what outlet the “Man Banter” individuals put down for their press passes? Was it Sirius XM, their own YouTube channel or something else?

Lance:  It was Sirius.  Since this has all broke, there is a sudden bought of honesty as the perpetrators have been very careful to stress to all involved the Sirius was not involved in any way.

J: When were you first personally made aware there was an issue? Did one of the con goers come to you directly or did another staff member bring the information to you?

Lance:  Saturday night, late.  My PR manager was trying to ascertain just who these people were.  I then spoke with Diana Pho on Monday who helped to piece things together.  We banned them on Sunday.

J: What action did you take at that time? Was the group spoken to directly by you or other staff at all?

Lance:  Saturday night we attempted to ascertain who these people were, Sunday we communicated to the person who’s contact info we had that they were banned from returning to NYCC and all ReedPOP events and let them know they could speak with our attorneys if they had any further questions.

J: Convention harassment has been a big issue in the geek community over the last year. We did a post centering around Comic-Con International’s policy, which is only posted in their 200+ page guide given to attendees at the show. We started a list of conventions that have a clear and easily found harassment policy on their websites, and did not list NYCC because yours is hidden in an FAQ. While the statement is a good one, do you feel it might be time to move an expanded harassment policy to a more prominent, specific, and easily found spot on your site? Or perhaps an additional statement in the press section, considering recent events?

Lance: More important than where the policy lives is if it exists and the staff lives the policy – and I believe mine does.  Now, that said I think we absolutely will post it multiple places, but in particular the press page.  What really caught us off guard on this was it being accredited members of the press perpetrating this.  I think you’ve been covering NYCC for years for various outlets and you know that in the last couple of years and this one in particular we have gotten very strict about press credentials.  That was most shocking and unnerving to us.

Once this was brought to our attention we immediately began working to rectify the situation.  And we now have a better sense of what these guys did to be deceitful and slip through some of the checks we have in place, thus it will allow us to do a better job in the future of stopping behaviors like this even more immediately. We demand that NYCC to be safe for all in attendance. We do have an anti harassment policy. Our team does live it and believe it. It’s frustrating that in spite of all of that fans, and our favorite fans – passionate cosplayers – were harassed. That is not the kind of event I want to run – and won’t.

Man Banter has since apologized to at least one of the cosplayers who took their harassment to social media, but personally I find it difficult to accept such a fast and easy retraction. The amount of deliberate planning and duplicitousness that Man Banter apparently underwent to circumvent the policies in place to accredit press badges, for the express purpose of verbally attacking and embarrassing women on film so that they could share that footage with their audience, speaks to a firm assumption that women are “less than.” I think it’s more likely that Man Banter was so short-sighted in their misogyny and low opinion of the geek community that they did not expect anyone to care that they were harassing women, and also that they are now terrified that Sirius Radio will, rightfully, sue them for impersonating their employees.

But lets return to the situation as a whole. As anybody who’s been to a few New York Comic Cons can attest: the con is already big, but it’s also near to bursting the Javits Center’s seams. Maneuvering anywhere, using any form of wireless communication, or trying to find a specific person in a crowd (or even a spot where you can turn in a circle with your arms akimbo without touching anyone) is slow, difficult, dicey, and sometimes simply impossible. Convention staff are just as often friendly as they are disdainful to attendees (as in the security person who referred to folks trying to get into The Mary Sue’s own panel as “hopeless idiots” loudly within earshot of them), and are routinely awful at line management. This has been the case for years. It was hoped that perhaps this year’s focus on limiting the number of badges, strictly enforcing exits and entrances, and eliminating common paths to forgery or scalping would cut down on some of those problems, but the best I could say about the crowds this year was that they seemed “not worse than last year.”

At a certain point these elements (overcrowding, difficulty in communication, etc.) stop seeming like roadblocks in the way of ReedPop’s ability to make sure that attendees can feel safe interacting with their fellow fans, and more like the basic facts of New York Comic Con that ReedPop, as the people who are throwing this party, should have measures in place to operate around.

Javits employees, particularly the Citadel Security employees who I saw tasked to regulating lines, need to be better educated about the nature of fan-based cons. It is frankly embarrassing for staff to be looking down their noses at people willing to stand on line a few minutes longer for a very small chance at getting into a panel at one of the country’s largest fan conventions. (Admittedly, I love the irony of hearing a guard complain that they’d been asked if they were in costume three times that day when their company shares a name with a prominent police force in a massively popular video game franchise.) A system should have been in place that made it possible to confirm the behavior of Man Banter’s interview team and make even a high level decision to escort them from the premises within a few hours of the first complaint, not an overnight operation, regardless of how crowded the space was. And the Arizona Tea ads should have been previewed and shot down before the show ever began.

I’m a little disappointed that NYCC was caught off guard by harassment from someone with a press badge, since ReedPop also runs PAX East, where a member of the press was booted from the con for behaving inappropriately to underage Lara Croft cosplayers only this spring, but I’m glad to hear that ReedPop will be making NYCC’s anti-harassment policy more visible. It would be impossible for any con to be able to completely prevent harassment in its halls, but there is certainly room for improvement at many events around the country.