Wyldstyle is NOT amused. 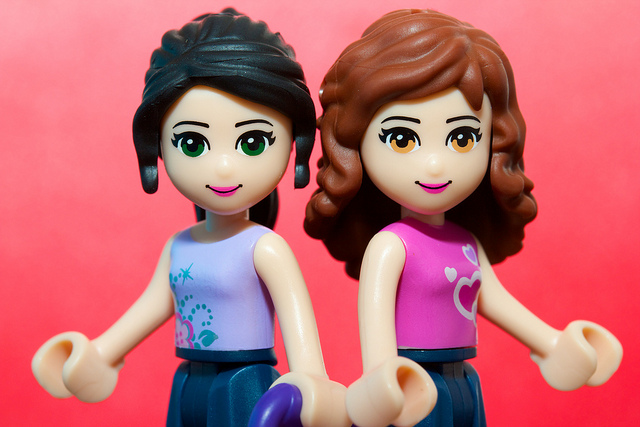 The LEGO Friends have always been a bummer considering LEGO’s otherwise pretty decent track record of creating toys that offer representation without gendering (at least compared to the low bar set by competitors like Hasbro or Marvel), but this latest development is truly disappointing. LEGO execs, I sentence you to a lifetime of stepping on bricks of your own creation.

My 7-year-old wants to know if she has an oval face. Why? Because “oval faces can often have almost any style haircut because almost everything looks great on this face shape!” Her sudden concern with her hairstyle “looking great” comes courtesy of her new Lego Club Magazine, which included “Emma’s Beauty Tips” in the March-April 2015 Lego Club Magazine.

[…] Lego Friends, according to the Lego website, is meant for children ages 5 to 12. Children far too young to be told by the oval-faced (of course) Lego “Friend” Emma that little girls with square faces need a haircut to “soften the edges of your face” while the unfortunate long-faced girls — remember, ages 5 to 12 — can get a haircut to “help your face appear slightly shorter.”

Holbrook says that although she was already concerned by the LEGO Friends’ stereotypical depiction of femininity, she purchased the line for her 7-year-old because “I was glad she were [sic] building, and I was glad she was stretching her imagination, even when she was snapping together Lego pieces that were overwhelmingly pink and purple. I gave Lego credit. Perhaps the company believed it had to go sparkly to compete with today’s gender-specific toys and get girls interested in building. For my daughter, it worked.”

Personally, the LEGO Friends’ traditionally gendered colors like purple and pink never bothered me as much as the minifigs’ slender waists (a problem with female minifigs across all different LEGO lines, to be fair) and disproportionately large eyes. For boys, their representation in minifigs comes largely without cost to their self-image; for girls, many of LEGO’s toys (and especially the LEGO Friends) emphasize the importance of obtaining an arbitrary physical standard in order to fit in.

That might sound like I’m reaching, but remember that LEGO approved a toy magazine for kids with a feature essentially making young readers self-conscious about a part of their body they probably hadn’t even learned could be ‘lacking’ yet. The narrative that women have to do and buy things to ‘fix’ their bodies is taught to girls from an early age, and it starts with insidious, seemingly unimportant messages like this one.

Luckily, a ton of savvy parents and consumers called LEGO out on the tasteless feature; head over to the company’s Twitter page now and you’ll see a long parade of apologies.

@Deegley (1/3) Thank you for reaching out with valuable feedback. We gather insights from the LEGO Club Magazine audience and they

@Deegley (2/3) asked for content similar to an “advice column,” which we attempted to deliver by elaborating on a LEGO Friends story.

@Deegley (3/3) We’re sorry for any disappointment and the LEGO Club team will use this feedback to positively impact future stories.

Although I think this gaffe is an indicator that the LEGO Friends line is in need of a reboot, even at their worst LEGO products still give the consumer a level of control that something like Barbie might not. In the past, builders have turned the LEGO Friends into superheroes and given the girls power armor, and now Elbe Spurling has created a piece that gives LEGO execs a taste of their own, gross medicine: 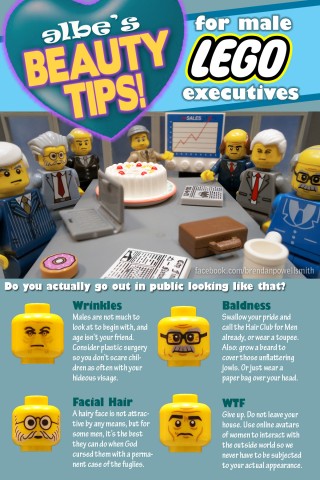 (via Boing Boing, image via Tracheotomy Bob on Flickr)