Hasbro “Feels They Have Released Plenty” Of Female Character Star Wars Toys, Has No Plans To Announce More 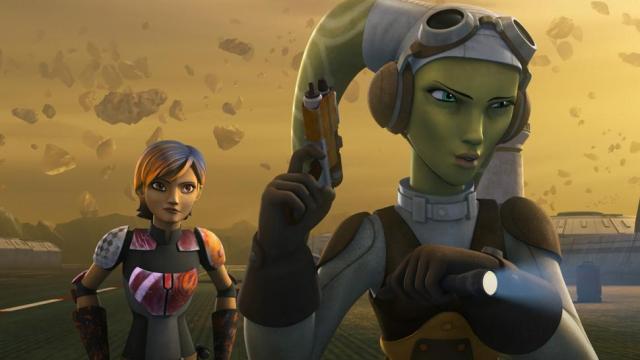 [Update 11:42AM 2/18/2015]: Hasbro has “revised” their answer to the question to include all the female Star Wars they’ve already released, surprising no one.

Fans of Star Wars: Rebels were relieved back in December when Hasbro finally announced they’d be adding figures Hera and Sabine, two major female characters from the show, to their line of Rebels toys. But when you stack them up against the many differently sized figures of male characters, the options still seems a bit… lopsided. Well, too bad, because if what you want is more female figures, Hasbro doesn’t seem to care what you think.

Star Wars Collectible fan site Jedi Temple Archives asked a representative for Hasbro about this deficiency this past weekend at the New York 2015 Toy Fair. Their answer? Not very encouraging.

Q: Where are the action figures for the female characters from Rebels, like Hera, Sabine, or Maketh Tua? Male characters like Ezra and Kanan have been released multiple times already in many formats and scales, yet the best we’ve seen on shelves so far is a single Sabine with a non-removable helmet and a yet-to-be-released Hera, both of whom are packed with re-released Stormtroopers. Female characters have always played an integral role in the Star Wars saga, from Leia in the original trilogy to Padme in the prequels to Ahsoka and Asaaj in The Clone Wars and have always been among the first characters released in figure form, yet for this new chapter in the Saga, they’ve barely been a blip on the radar.

A: Hasbro feels they have released plenty of female characters in the line.

Hasbro responded similarly when asked about other specific female characters in the Star Wars franchise, in particular Leia and Asaaj Ventress, for whom they “have no plans for at the moment.”

This comes, Jedi Temple Archives tells us, after an mistaken leak that led many collectors to believe we’d soon be getting a figure of “Ewok Celebration” Leia in the Rebel Saga Legends line. Instead she will only appear in her A New Hope dress, and packaged with a Stormtrooper Luke (of course). A Boussh Bounty Hunter Leia from Return of the Jedi will also be added to the Black Series, where previously all we had to choose from was Slave Leia. So that’s something, I suppose.

(Speaking of which, here’s a fun fact I discovered while investigating these toy lines: If you go to the Star Wars Hasbro page, you can break down all of their products by gender. 729 products in their line are listed for boys; 25 appear to be arbitrarily listed as “both;” and 6—that’s six—toys are for girls. They are all Angry Bird Stella toys. There’s also a breakdown by character that only lists male ones, and not particularly relevant ones at that. There’s a category for Jar Jar Binks, for example, but none for Star Wars Rebels’ Ezra, who is arguably much better liked by fans. Hey Hasbro: if you’re going to pretend that girls aren’t interested in Star Wars and that the female characters in the franchise don’t matter even to boys, the least you could do is stop the pretense that anybody cares about Jar Jar Binks as a viable alternative.)

Anyway, one can only hope that there’ll be plenty of toys of Daisy Ridley, Gwendoline Christie, and Lupita Nyong’o once Hasbro is able to announce their line for The Force Awakens. But given Hasbro’s track record—and the entire toy industry at large, which tends to ignores female characters in kid-oriented genre franchises almost entirely.  Seriously, what will it take for toymakers to understand that there is demand for toys that depict women?