Our First Look At the New LEGO Female Scientist Set 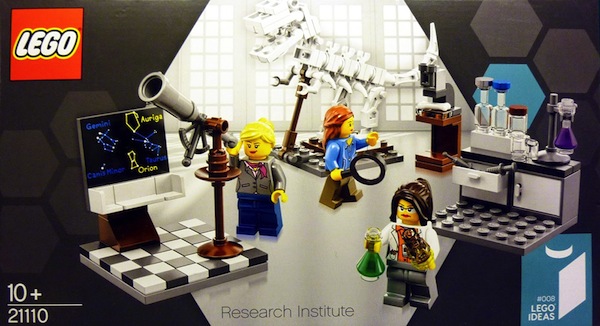 They’re almost here! We’ve been waiting for this moment since Alatariel first published her design for a female scientist set on LEGO Ideas (then CUSCOO) in June of last year, and the final LEGO-approved designs are exactly as cool as we would want them to be—save for, from my perspective, one little flaw.

The design was only just chosen last month, but Alatariel already has a review of the completed set on her blog, which includes details about packaging and building the sets. According to her, there were some slight changes in design to allow for balance issues—most notably, the tail on the dinosaur skeleton is different—but overall, they’re all remarkably close to what she intended.

The minifigures themselves are great as well. As Alatariel notes, it was important for her that some of the scientists be wearing plainclothes since “only a few institutes have strict dress codes,” save for those which require safety gear in labs. Each of the scientists has a different fashion sense and hairstyle so it really feels like they all have their own personalities, which will no doubt make it that much more engaging for young builders (and for the record, I do love that one of them has a nice pink accent—just enough that it feels like you can like pink and still be an awesome scientist without it completely overpowering you). The minifig heads also have faces on either side, so that you can make them look generically confident and good at their jobs, or you can make them look like this:

I live for these facial expressions, guys. Just look at them. Look at them.

Unfortunately, these minifigs have also been subjected to my all time worst LEGO-related pet peeve, which I’ve been ticked off by ever since I noticed it a few months ago: their indented waists. The standard LEGO minifig torso has a slight trapezoid shape to it, but apparently that’s not feminine-looking enough for the modern female minifigs, who all have this weird drawn-on indent on either side of them to give them the illusion of a curvier frame. At best, it’s unnecessary and kind of distracting; at worst, it’s pretty gender essentialist. And either way, it makes me… well, kinda look like that red-haired minifig in the middle, there.

For the record, Alaterial’s initial design did not have these indents, and it appears to be a systemic problem across LEGO’s entire current minifigure collection —and, of course, it’s not as bad as the LEGO Friends’ waists—but it aggravates me to look at, and I want to believe I’m not alone in that.

Alaterial, of course, has her own concerns as well, but hers are a lot more practical:

I was told the chemist figure was loosely based on me, but I would have to say I look more like my Alatariel avatar with light brown/dark blond hair and different glasses. Also, I strongly discourage wearing make-up in the lab, because it may cause contamination of the samples. I’m surprised they didn’t give her protective gloves though, like the previously released scientist figure had. In my personal version I will definitely change that, because safety comes first!

Gloves! See, this is why I complain about LEGO for a living instead of doing actual science. I would totally end up like the lady in all those safety goggles awareness posters.

Aside from all the nitpicking, however, there’s more to praise about this upcoming “Research Institute” set (and bonus points for giving it a completely gender-neutral name even though we all keep calling it “the lady scientists set”) than there is to criticize. Any toy that encourages girls to learn all about the different modes and applications of science is all right in my book—and you definitely can’t go wrong with dinosaur fossils, that’s for sure.