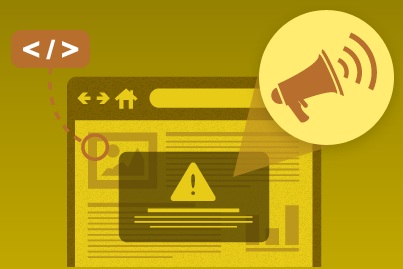 Sometimes it feels like every other day, there’s a piece of legislation passing through congress that threatens the Internet as we know it. SOPA was the first big one to really whip webizens into a frenzy, and since then there’s been ACTA (which managed to to get signed in the U.S.) and now CISPA, which has passed a vote in the House and is moving on to the Senate. Include all the other little pieces of legislation out there that are equally egregious, and it seems like there’s always something to be worrying about or protesting. That’s why Reddit founder Alexis Ohanian along with the Electronic Frontier Foundation and others have established the Internet Defense League (IDL) and are working on a “Internet Bat-Signal” to get the word out about dangerous legislation that’s yet to come.

The plan goes a little something like this. Any website can join the Internet Defense League. Once you’ve joined the IDL, you add a bit of code to your website that can be activated to show a banner or a widget in case of an “Internet emergency” like the upcoming Senate vote on CISPA, or the introduction of some new, dangerous legislation. If you’re uncomfortable with the Bat-Signal being placed on your site directly, you can instead opt to be sent specific snippets of code any time the IDF launches a campaign (i.e. turns on the Bat-Signal) allowing you to pick and choose what you show.

So far, the ranks of the IDL include Reddit, Imgur, Mozilla, the Electronic Frontier Foundation, and the Cheezburger Network. If more large networks join up, along with smaller blogs and Tumblrs and even Twitter feeds, this alert system could have some positive results. While joining the IDL basically amounts to signing up for a newsletter as far as website owners are concerned, the commitment to amplify the message by broadcasting it to viewers could make it easier to quickly get the news out about dangerous legislation.

When you think about it, it’s quite interesting that something like this could conceivably exist. The only reason it can, for the moment anyway, is because “The Internet” has had a collective opinion on several pieces of legislation that managed to both transcend traditional party lines and also piss off webizens almost universally. At some point in the future, leglislation as it relates to the web is bound to get nuanced to the point where opinions regarding it differ, but for the time being, the lion’s share of Internet legislation is so misinformed (or paid for by special interests, depending on who you ask) that a general consensus can be reached with almost no speed bumps. Take a minute to try and think of anyone who was pro-SOPA or is pro-CISPA.

It’ll be interesting to see how the IDL plays out and whether or not it can pick up any of the real big players from the SOPA blackout. Something tells me that titans like Wikipedia and Google, who really turned the tide in the SOPA blackouts, are going to stick with an opt-in approach to Internet protesting as opposed to an “install-this-widget-and-it’ll-say-things-automatically” approach, but the more channels there are for the word to get out, the better. If you see a silhoutte of a lolcat light up the sky in the distance, you’ll know it’s working.