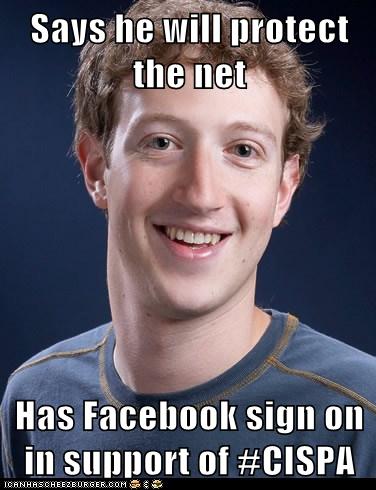 When SOPA was rolling through Congress, there was a lot of loud protest not only by webizens, but also by many Internet behemoths like Wikipedia, Reddit, and even Google. When it comes to CISPA, on the other hand, expect no such help. It might surprise you to know that Facebook, which was rather quietly anti-SOPA during the blackouts, is actually pro-CISPA. And even though that might surprise you, it shouldn’t. Why? Because it makes total sense.

It bears repeating that CISPA is as much of a threat to the Internet as SOPA was, but that the threat is distinctly different. When it comes to individuals like you or me, both bills are bad news. SOPA stood to take away our favorite content hosting sites, social hangouts, and forums for user generated content. Naturally, the sites themselves — and their associated business people — were concerned about this as well. In contrast, CISPA presents a serious privacy breach to individuals, but from a site’s perspective, especially a social networking site’s perspective, it could actually be a boon, or at least a non-issue.

It pretty much comes down to this: Under CISPA, you wouldn’t be able to sue a site for giving up your information to the government. If you’re a site that doesn’t particularly care about your users’ privacy (read: Facebook), this is great. Whether or not Facebook, or any other site with information about you, is going to share your info with the government doesn’t really factor into it at all. For just about any site, CISPA means that something that is used to create lawsuits against them (even just potentially), no longer creates lawsuits against them. Convenient, right? This is a feature, not a bug.

If you remember point number three in our little CISPA primer, you know that one of the bill’s problems is its overzealous protection information sharing. CISPA makes all sharers of cybersecurity information exempt from both federal and civil suits considering that CISPA supersedes all information privacy laws. If you were Facebook, wouldn’t you want to be protected from federal and civil suits whenever you can be? Especially when you are sharing information with the government, a touchy thing that you probably already do? Of course you would.

And what if you’re a site that doesn’t have a bunch of user information that the government is likely to want, or aren’t too keen on giving away info unless you are legally forced to? CISPA isn’t going to hurt you, exactly. I mean, it might hurt you, the owner of a site, as an individual, but it isn’t going to impede your site’s business. At worst, it’s free insurance against something that probably won’t happen, but might. Not much to get fired up about, is there? Supporting SOPA was a bad business move for online businesses. Supporting CISPA is a good one, or at least one that doesn’t matter. For now.

The only way it’ll become a bad decision is if individuals start acting up. Hopefully, some of those individuals will be ones at the helm of Internet giants, but unlike last time, it’s not as much of a default position to assume. If you’d like to be one of those individuals who is acting up, there are a few things you can do. Demand Progress has a handy “annoy Facebook about CISPA” action kit. You can also follow the @houseintelcomm Twitter account, something of a mascot for the pro-CISPA camp. It’s bound to help you keep things in mind and stay upset. There’s only so much you can do, but this time around it’s extra important that you do it since help from the big guys is a bit less certain.