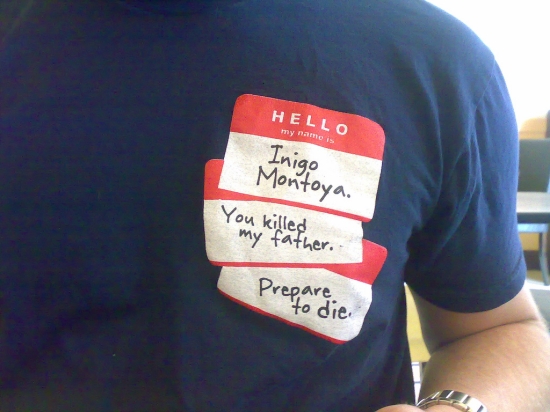 People can be touchy about air travel these days, so a shirt with the words “prepare to die” written on the front might not be the smartest choice of apparel for a trip through the friendly skies. “Prepare to die” sounds intimidating, but it’s all about context. The phrase, “Hello. My name is Inigo Montoya. You killed my father. Prepare to die,” is frankly downright inspiring, but when Wynand Mullins wore his The Princess Bride shirt with that line onto a plane, he found out the other passengers weren’t fans, and he was ultimately asked to remove it.

The problems with Mullins’ choice of shirt arose on a Qantas flight from Sydney, Australia to New Zealand. He was approached by a flight attendant who told him that other passengers were intimidated by the shirt, and Mullins was asked if he could remove it. Mullins said the reaction was “a bit over the top,” and the person sitting next to him knew it. They were laughing because they happened to both be familiar with the movie.

The flight attendant tried to find a different shirt for Mullins to wear, because Mullins didn’t have another one with him. Mullins said he hoped he would get to dress up like a pilot, because who wouldn’t want that? But it doesn’t look he got the chance. Qantas has no official record of the incident, implying it was handled solely by the crew on the plane and didn’t escalate any further, but they do have a dress code policy pertaining to slogans on clothing that other passengers could find offensive.

Clearly any fan of The Princess Bride knows the line, and unless they happen to have six fingers on their right hand, they wouldn’t be the least bit intimidated by it. Sadly, though, not everyone has seen The Princess Bride and seeing the words “Prepare to die” on some guy’s shirt on an airplane could be unsettling, especially for anyone already afraid of flying.

I think the real take away from this story is that there’s a dangerously high number of people in Australia who haven’t seen The Princess Bride. I have several DVD copies I’m willing to donate if we can get some kind of charity together to fix this problem.

Since the line “Hello. My name is Inigo Montoya. You killed my father. Prepare to die,” is now no doubt stuck in your head, but you might not have time to watch the whole movie right now, here’s a clip of Mandy Patinkin saying it a bunch of times.