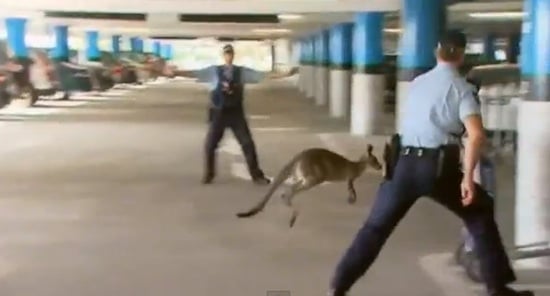 For the second time in just a few months, things at the Melbourne International Airport parking lot ground to a standstill this week as police and animal control officers worked to capture a kangaroo that had entered the garage and just started hopping around like it owned the place. Keep reading for footage of the rogue marsupial and a final answer to that eternal question: just how many Australian police officers does it take to wrangle a kangaroo? Because we count at least four.

While it didn’t understand the mess it was making for folks who just wanted to get off their flights and into their cars and please, Lord, just not be at the airport for once second longer, the kangaroo probably didn’t have any malicious intent behind it’s big day out. Probably.

After leading police and airport staff on a merry chase — at least we thought it was merry, because of all the hopping — the stressed-out creature was eventually tranquilized and carted off by animal control officers. It will spend some time in captive care to make sure it’s healthy and be given stern lectures about the dangers of hanging around in strange parking lots before being released into the wild —  ideally someplace far away from the Melbourne Airport parking garage.

The latest marsupial encounter, though, may be a signal for the parking garage to finally get around to installing some kangaroo deterrents, as this is the second time in just a few months they’ve had to make an issue of a loose kangaroo in the parking structure.