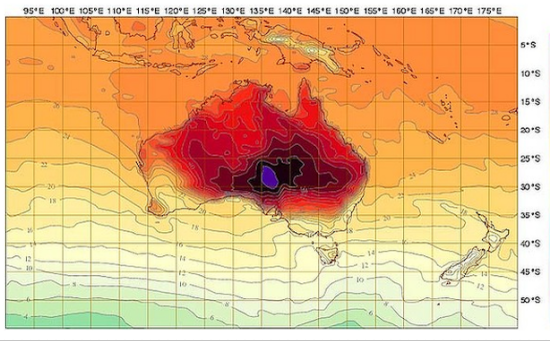 It’s hot in Australia right now. How hot is it? So hot that they had to add new colors to their weather maps to show how hot it’s going to be next week. A shade of purple was added to denote temperatures above 50 degrees Celsius, or 122 Fahrenheit. Sometimes adding new colors to things can be exciting. Remember how happy everyone was when they added a blue M&M? Or how much cooler things were once the Green Power Ranger showed up? Now imagine wearing a Power Ranger costume and trying to eat melted M&Ms in 122 degree heat. That’s a lot less exciting.

The previous record for an all-time high temperature in Australia was just over 123 degrees, and it was set in January of 1960. That would have shown up as black on the old color temperature scale. Yesterday was the hottest day for the country as an average with a temperature of 104.5, and that could well be broken again today.

The forecast for next week had temperatures going above the black 50 degrees Celsius mark, previously the top of the scale, so they added purple to accommodate those anticipated record-breaking temperatures, but they also added pink to the scale for the eventuality that temperatures reach 52-54 degrees Celsius, or 125.6-129.2 degress Fahrenheit.

No one wants to see pink on that map.

The good news is that the picture above was taken earlier from the Australian Bureau of Meteorology shows the forecast for 5pm on Monday the 14th. It’s being run with this story in a few places, we saw it on The Atlantic Wire, but when we tried to replicate the map on the ABM site for the same time next week we got this: 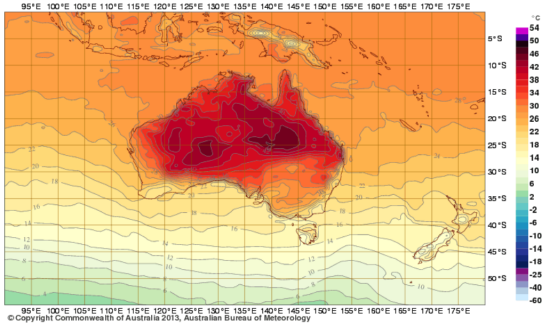 It looks like they’ve downgraded their forecast. There are still temperatures of well over 100 degrees for much of the country, but at least there’s no purple.

(via The Atlantic Wire, image via Australian Bureau of Meteorology)