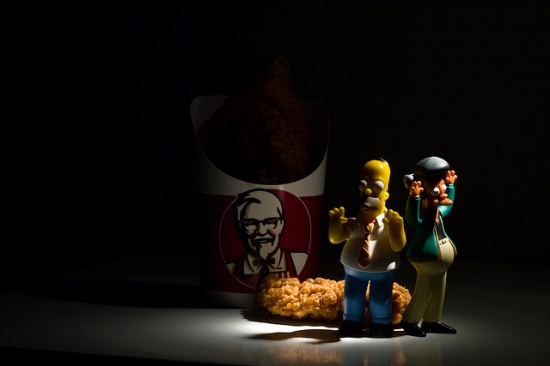 We love a good heist story here at Geekosystem. We even love ridiculous heist stories, which is good, because this story is exactly that — Ridiculous. Two men in Australia have been arrested after tunneling into a KFC and holding it up, making off with thousands of dollars, and we assume the Colonel’s secret recipe. That’s silly enough, but the pair was actually trying to tunnel into the adjacent jewelry store. Better still, this marks their third unsuccessful attempt at robbing that same jewelry store. They’re persistence is admirable, even if their burglary skills are somewhat lacking.

Peter Welsh and Dwayne Doolan are nothing if not tenacious. Initially the men tried to break into the jewelry store by smashing the front windows. Failing that, they later tried to break in through the back doors of the store, but mistakenly broke into the Animal Welfare League Opportunity Shop, which we believe is an Australian thrift store run by talking animals down on their luck. That second attempt wasn’t a total failure. The pair of criminals made off with a charity box that had $50.

Not satisfied with stealing from charity, the two made a third attempt at getting into the store by breaking through a wall of a shared bathroom in the strip mall they thought led to the jewelry store. It did not. It was the wall to the KFC.

Once inside the restaurant the men threatened workers with the iron bar they used to break through the wall until one employee opened the safe. They made off with the contents, but were later apprehended. Welsh was charged with armed robbery, attempted burglary, and burglary, while Doolan was charged with robbery. They were both charged with stealing.

Harry and Marv from Home Alone are better burglars than these two, but who knows, maybe the store was defended by a precocious eight-year-old.

(via The Telegraph, image via patrickkontschak)