Hyrule Historia, the Book that Exposed the Official Zelda Timeline, is Headed to an English Translation 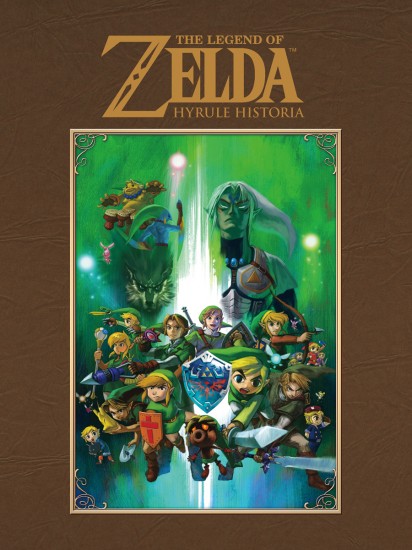 Not too long ago, Nintendo finally shed light on the official The Legend of Zelda timeline. Nintendo always said there is a cohesive order of events between each and every official Zelda title, but would never release the timeline they steadfastly claimed they had all hashed out. When they finally did release the timeline, it was a crazy mishmosh (technical term) of what ended up being three different timelines depending on what happened in the Ocarina of Time story. Ocarina’s story didn’t have multiple endings. Nintendo needed a way to explain why a bunch of games with mythologies in direct contradiction to one another would all appear in “one” timeline, so they branched the timelines off into what would’ve happened if Link was defeated or if Link saved the day, but also if Link was a child or if Link was an adult. Yes, it’s convoluted, but on January 16, 2013, you can finally own the book in which the timeline was published, Hyrule Historia, in English.

The book released last year, only in Japanese, as part of The Legend of Zelda’s 25th anniversary. Dark Horse will be publishing the book for the United States, United Kingdom, and Australia, and a spokesperson said it will be a page-for-page adaption, but “with some minor tweaks.” The spokesperson assures us that everything will be translated from the original Japanese, citing the “smallest of hand-written notes on the concept designs, some stuff that was too small to be legible in the Japanese version.”

The English version of Hyrule Historia will release on January 16, 2013, as a hardcover measuring in at 9 x 12 inches, filled with 248 pages of everything you wanted to know about Zelda. The book will be priced at $34.99, which doesn’t seem so bad for a 248-page hardcover book being wholly translated from another language. The English version will have a special introduction from Shigeru Miyamoto himself, and will hopefully be just as delightfully insane as he is.

In the meantime, go check out this fan-translated version of the official Zelda timeline, but make sure to take breaks so your eyes don’t end up permanently crossed.