Harrison Ford Flips Out on Kimmel Video | The Mary Sue 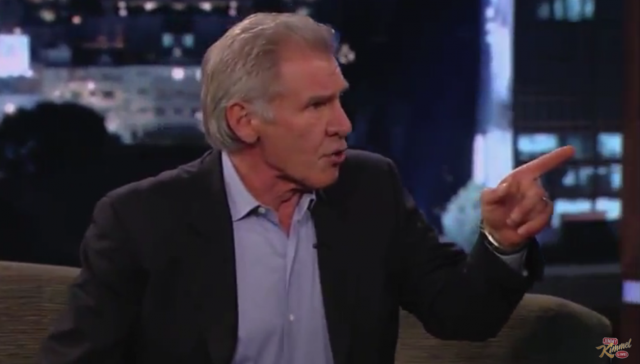 It has to be hard when you’re an actor trying to promote something, but all anyone wants to talk about is another project. When Harrison Ford appeared on Jimmy Kimmel Live last night, he took questions from the audience, but refused to talk about Star Wars Episode VII. He went on to answer a few questions before being confronted by an old friend.

The set up to this is pretty simple, but that’s not a bad thing. Ford was there to talk about his role in 42, but obviously the only thing anyone wants to talk to Ford about right now is Episode VII. This was a pretty clever way of addressing that without pressing Ford too hard for Star Wars info. Take a look:

I’m not positive if this sparked a feud between Ford and Daniel Craig over the “wookiee bitch” line or not.