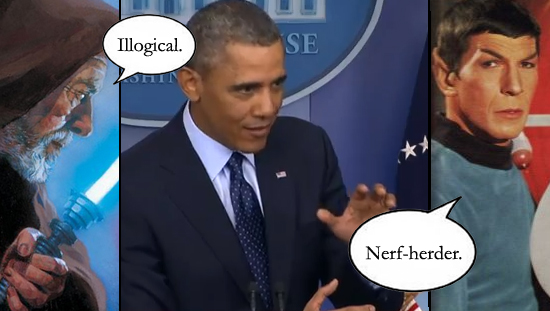 We felt a great disturbance in the Force, as if millions of geek voices suddenly cried out in terror and suddenly went where no man has gone before. Because in the world of Presidential speech flubs — and yes, that’s a whole universe — today’s was pretty good. We geeks must set aside our differences, commiserate, and laugh together at the fact that President Obama just conflated Star Wars and Star Trek. But even the White House laughs with us.

First, watch the whole bit, or jump to around the 0:30 mark, in which Obama has been asked why he can’t just force Republicans and Democrats to cooperate.

The Internets were quaking from the mix-up, the nerds are threatening to revolt. The Force Ghost of Gene Roddenberry and a CGI George Lucas were locked in battle!

Then the White House totally owned up to the Prez’s goof on Twitter. WhiteHouse.Gov/JediMindMeld even goes to the page about Obama’s sequester plan. They could have been all defensive about it, but poking fun at the flub is a completely refreshing approach. Take a look of what they cobbled together: 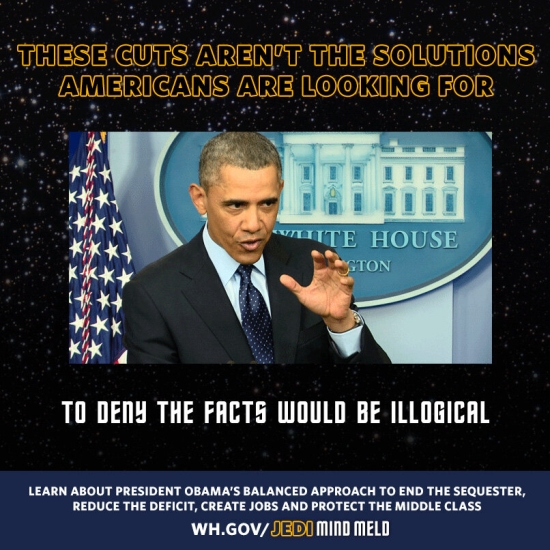 They did the right thing — as most of us were — by making light of it. Amidst the cold realities of the sequester, I think we can all agree that some levity is needed. So thank you for making it so, Obama! I mean, someone had to go into Tosche Station to pick up some power  converters, and why not you. Your resistance was futile.

“Dammit Luke, I’m a doctor, not your father!” #ObamaSciFiQuotes

What else have you got, geekdom?