Game of Thrones Recap: First of His Name | The Mary Sue

Game of Thrones Recap: “First Of His Name” 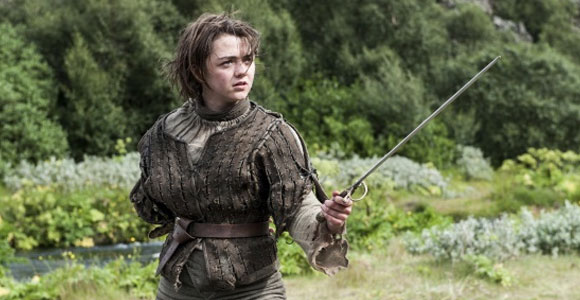 Last week Game of Thrones was full of setups. Last night’s episode offered plenty of payoffs, including the answer to the show-starting mystery of who killed Jon Arryn! Who had us cheering and who has us reeling? Dig in and sound off in comments.

“First of His Name” was an episode of hard lessons for the surviving Stark children. Their parents lovingly instructed them in the ways of honor, respect, and civility in all things from socializing to battle. But Sansa, Arya, Jon, and Bran are learning the value of vice in survival.

In the continuing journeys of Arya and the Hound, the youngest lady Stark has stacked up a disturbingly long to-kill list. But if she really plans to take down the Lannisters and just about every crony they’ve ever paid off, The Hound has a cold lesson for her.

Rhapsodizing about her water dancing mentor Syrio Forel, Arya is desperately trying to find a sense of safety and footing so far away from everything she knows. So she tries to ground herself by practicing her footwork. But The Hound has no patience for this kind of sentimentality, especially when it’s the sort of flourish that can get you killed. What does the prestige of being the world’s greatest fighter matter when you’re dead? Armor and carrying a big f*cking sword beats a skilled fighter with no weapon. Arya’s learning the same lesson Jaime got smacked in the face with last week: Pretty fighting can’t compete with underhanded fighting.

Jon Snow also learned the value of underhanded fighting in his showdown at Craster’s Keep against Karl Tanner. Oh, Karl. Your time on the show was brief, but we are thrilled (or at least greatly relieved) to see your mass-raping ass go—and thankfully before you managed to get to Meera.

As is Karl’s way, he can do nothing evil without a big self-important speech. While stabbing his snickety snik knives into Jon’s torso, he schooled Snow on the virtues of fighting dirty. Spit in the eye! But just as Karl has honorable Jon cornered, one of his many victims springs from the shadows and stabs him in the back. (Huzzah!) Karl turns on her, then Jon follows her lead, taking his big f*cking sword and plunging it right through Karl’s ugly, vile face. So dies another tyrant at Craster’s Keep. Good riddance.

Within spitting distance of Jon and his final battle, Bran was forced to make a grim decision of his own. To save himself from Bolton’s man Locke, Bran warged into Hodor. In a show that deals so directly with the inhumanity of slavery and rape, there’s something unsettling about Bran’s action here. He is invading Hodor’s body, after all, and forcing Hodor to behave as Bran needs, not as Hodor wants. We never saw Hodor consent to this possession, and director Michelle MacLaren made it a point to include a shot of Hodor looking with horror upon Locke’s neck-snapped corpse and then his own blood-covered hands. Bran is fighting outside the bounds of honor, too. It’s helping him survive, but this moment demands us to ask at what cost.

While Jon looks for Bran, Bran evades Jon, and Arya carries on with The Hound, Sansa has finally arrived into the safety of the Eyrie, the realm of her aunt Lysa and creepy cousin Robin. Sansa is reluctant to rest easy, and it’s a wise caution. As soon as she thinks she’s safe, smiling and reminiscing about her mother over lemon cakes (her fave!), Lysa spins from laughing auntie to snarling jealousy monster, demanding to know if Sansa is after her man!

This is the most lucid we’ve ever seen Lysa. Surprisingly, she’s even more unnerving here than she is as loopy Lysa. Sure, in front of Sansa she’s spouting off about Lannister conspiracies against her and her poor murdered husband Jon Arryn. But as soon as the kids are out of earshot she’s clawing at Littlefinger for loving and recounting how it was she who poisoned Jon Arryn at Littlefinger’s behest.

This is a huge, huge revelation. Sure, Varys has been warning us for seasons about how power hungry Littlefinger is. But look at how masterfully (and immorally) he’s been constructing his rise to power. As the Master of Coin he ran up enormous debts that bankrupted the throne, and likewise the Lannisters (per Tywin’s reveal to Cersei). Littlefinger seduced the wife of the Hand of the King Robert Baratheon. Then he convinced Lysa to murder her husband and throw suspicion onto the Lannisters. This spun the Lannisters and the Starks into direct conflict (which Littlefinger nudged along by betraying Ned). In the meantime, Littlefinger was amassing serious coin and allies as a whoremonger and through gaining ground and favor from Joffrey. But Joffrey was a bad ally, so murder. Now with the marriage of Lysa Arryn, Littlefinger has secured a title and an impenetrable fortress. How many steps off is he to ruling the realm as its newest king? And where the hell was Varys while all this was going down?!

Sansa doesn’t know any of this yet, but she’s a smart girl. Smart enough to play dumb to her aunt about Littlefinger’s advances. I think Sansa is learning how to lie just fine. And it’s about damn time. Sansa may be with the only family she knows is living, but she is still far from home. Here’s hoping Brienne and Podrick find their way to Sansa before Littlefinger finds his way into her bedchambers.

Let’s move on to that mismatched pair of adventurers. With many dark lessons being threaded throughout season four, Brienne and Podrick are a warm and welcomed ray of light. He is a loyal squire, the most loyal squire. But he’s not much for actual questing, and our lives are the richer for it. Every time Brienne scowls as Pod wobbles on his horse or sets their dinner on fire, my heart remembers what joy is again. Of all the characters on this show, my wish is for Pod to avoid slaughter. I know it’s unrealistic, but gang, my heart, she couldn’t take it.

Elsewhere Dany has learned she’s not living up to her lauded reputation either. Turns out that her sweeping in and toppling the slave traders didn’t fundamentally change the wealthy of Yunkai, and it just turned Astapor into a less stable kind of tyranny. #whitesaviorproblems Sorry to all those who are chomping at the bit to see those dragons finally fly over Westeros. Dany and company will be backpedaling to get her conquests right this time! I admire her intentions and fearlessness, but Dany herself does infuriate me with her naiveté about war and social change. This is why you have advisers, Dany. Listen up! 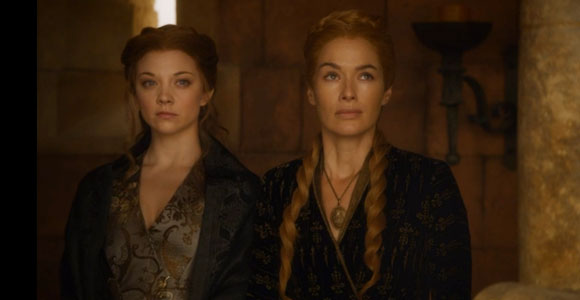 Lastly, let’s talk about this episode’s hands down most sickening element: Cersei making friends… well, allies anyway. The episode begins with the coronation of Tommen, and he bestows a special smile on his secret bedtime friend Margaery Tyrell. Now, I know some of you were deeply skeeved out by Margaery’s surreptitious visit to his chambers last episode, comparing it to pedophilia. But I don’t think that kind of wooing is what Margaery is up to. Notice how in this episode she’s toned down the cleavage intensely and is even draping herself in a shawl. For Joffrey she was sex personified because he was a horny teen boy. Tommen is looking for a friend and someone to be nice to him and Ser Pounce, so Margaery is playing that part. Yes, eventually if she becomes his queen, she’ll have to bed him for the line and all that. But that’s part of the duties, not the perks. For now, let’s get back to these new best gal pals.

Cersei knows exactly what Margaery’s up to despite her lovely protestations of not even dreaming of becoming queen so soon after her dear husband’s death. Cersei gives an eye-roll that is among the best ever seen on television. Then she gets real and says what we all know: Joffrey was a nightmare. This is the beginning of an uneasy alliance, all part of Cersei’s desperate efforts to keep some sort of contact with her remaining children.

This need also leads her to the outrageous Prince of Dorne Oberyn Martell, who can’t come within ten feet of a Lannister without reminding them how he blames them for the rape and murder of his beloved sister. It’d get tedious if he didn’t do it with such an intoxicating blend of  cordialness and stewing hatred. But he does. Always. And so far it’s darkly amusing every single time.

With him, Cersei seeks another unlikely ally for two reasons. One, she wants to sway his judgement to rule against Tyrion at the trial for Joffrey’s murder. (Oh, Cersei.) And two, she wants to get a sailboat to little daughter Myrcella, whom she worries may feel as abandoned as she once did. Cersei’s loneliness and longing for her children here is only matched by her feeling of helplessness to protect them. She’s never been as smart as Tyrion, but she’s got plenty of right to fear. If Joffrey could be taken down in front of the world, how safe are any of the Lannisters, really?