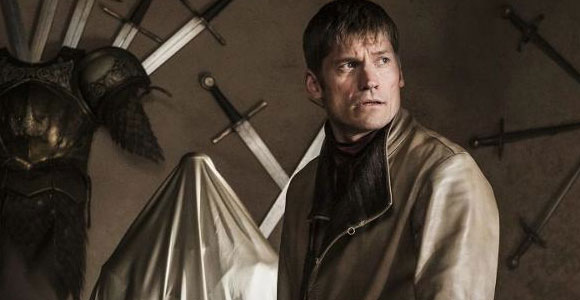 We’re still reeling from last week’s episode, so last night’s ep was watched with a certain level of anxiety. “Oathkeeper” gave us scenes that were absolutely horrific (Hodor!) and a couple that were surprisingly sweet. Which was your favorite onscreen pairing? Which moment made your heart swell or sink? Let’s recap and then sound off in comments.

Last week I was lamenting that “Breaker of Chains” finished pretty strong, but it seemed to cut short to save the show the costs of shooting a massive slave revolt. Well, David Benioff and D.B. Weiss didn’t skimp as much as I’d expected, as this new episode began with Grey Worm sneaking into the slave quarters and giving them the weapons needed to win their freedom via massacre. It was a short sequence, but satisfying, ending on the Targaryen flag draped high over Meereen. (I like to imagine a deleted scene of Dany directing her dragons to hang it.)

Despite Barristan Selmy’s plea for mercy, those silk-wearing masters who managed to escape class warfare killings didn’t escape the wrath of Daenerys Targaryen. She distinctly remembers every crucified slave child whose cruel murder led her army to Meereen, and the Stormborn’s brand of justice is eye for an eye all the way. The loyal Grey Worm takes this message to heart, making “Kill the Masters” his rallying cry and life’s mission. Does this mean he may some day turn on his new queen?

Justice was our big theme last night, which is a bit surprising considering how unjust the world of Game of Thrones usually is. For proof of that just look at the poor Starks, who tried to play fair and paid for it again and again. Because he still knows nothing, Jon Snow is seeking to bring justice to the turncoat Crows held up at Craster’s home, pushing for an expedition to bring them down.

Making us yearn for a bloody recompense is a scene that presents Craster’s domain as a rape hut under new management, specifically that of Karl Tanner (Burn Gorman), who ate up lots of screentime last night, proving to us he is one of the evilest men of Westeros. (And that’s saying something!) He is happy to have his men torture Hodor. He drinks from the skull of Jeor Mormont, threatens three children (one of whom is a paraplegic), and cares nothing when Jojen goes into a seizure. But worst of all, he gives his men the order”Fuck ’em ’til they’re dead!” Because only unredeemable villains in the world of Game of Thrones rape, right? We’ll get back to that.

Back to justice: Might we consider Joffrey’s death justice even if that wasn’t the motives of his killers? We had two back-to-back reveals of the regicide conspirators and two back-to-back shocked reactions from the young women in their care. Littlefinger—whom I suggest we redub LittleCreeper for the way he’s always all over poor Sansa—tells Sansa that Joffrey was an unreliable ally. To this she essentially says “Pot, have you met kettle?” He throws some shade by telling her she was a tool of this killing too, mentioning that not-heirloom necklace Ser Dontos gave her. Cut to: Littlefinger’s accomplice!

Olenna Tyrell is in a lovely garden telling Margaery of her masterminding of Joffrey’s death. She even tips how she did it by gently adjusting her granddaughter’s necklace. Remember that gesture from the Purple Wedding? Here’s a Tumblr reminder. While I had suspected Olenna, I was genuinely surprised that Margaery was surprised! That wide-eyed stare was sincere, and we learn that for all her knowing glances, sometimes Margaery too is in the dark of the Tyrell family’s schemes.

To that end, if Game of Thrones submits Natalie Dormer for Emmy consideration this year—which they absolutely should—my money would be on this episode being her win. For much of her time on the show Dormer has had to do little more than be beguiling with an edge of intelligence. This week she first showed us Margaery out of her comfort zone, which is not being in on the game. Then she displayed a very different version of Margaery’s seduction skills in a scene with little Tommen. Being much younger than Joffrey, Tommen is not ready for sex bomb-style seduction. So Margaery makes herself less threatening, more sweet. It’s downright charming the way she attempts to manipulate him for her own gain! Like a fairy tale, a beautiful lady emerges from the castle wall to make the prince laugh and share secrets. It’s an incredible thing that Game of Thrones can give us a moment so lovely and yet so twisted.

The bulk of the episode had to deal with Jaime Lannister: Jaime with Bronn, Jaime with Tyrion, Jaime with Cersei, Jaime with Brienne (and Podrick!). Having only read the first two George R.R. Martin books, I had no idea what liberties Benioff and Weiss took with the scene between Cersei and Jaime near Joffrey’s corpse when I was recapping last week. Watching what unfolded in “Breaker of Chains,” I had no doubt it was a rape scene. Of course, in the internet firestorm that followed we learned the show’s makers didn’t intend for it to read that way. But you know what? I don’t care what they say.

Whatever their intention, they made a rape scene, and those of us who saw it that way (which from comments seems to be most of us) will look at Jaime from here on out as a rapist. What does this mean for his quest for redemption? That remains to be seen. But with the knowledge that Nikolaj Coster-Waldau is reluctant to call that rape, I wonder if Jaime as a character doesn’t see himself as a rapist. Maybe he doesn’t. But does Cersei? I watched their scene together last night for some sign, as Lena Headey has remained strangely silent on the matter. But no easy answers lie there. 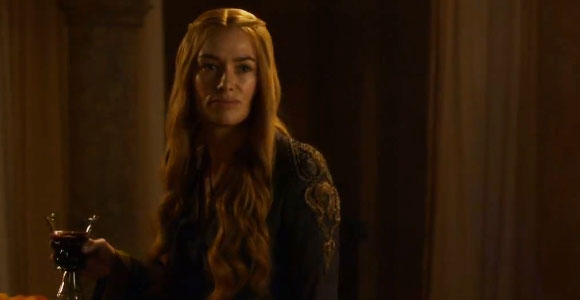 Cersei is clearly enraged with Jaime. She seethes at him, blames him for the death of Joffrey, suggests he is a traitor to their family. She’s cold and distant. She urges him to break his oath to Catelyn Stark. She’s punishing him, but why? Does this mean she feels wounded by what happened in the sept? Or is that she has been cold and distant because of all that came before, and the sept scene did nothing to change that? I’d like to think the former, because it means the rape has repercussions. But I am fully aware that I’m leaning that way in part because I’d like to be able to enjoy this show without worrying that it is anywhere near as misogynistic as its detractors insist. So I pose the question to you: Does Cersei feel she has been raped by her brother Jaime?

On Game of Thrones rape is typically an act only committed by the vilest villains, like the Mountain and his men. It usually means a painful death at the hands of heroes. Arya and the Hound murdered men who threatened to rape the innkeeper’s daughter. Brienne slayed three men who raped and lynched three young women. We cheered for Jaime when he prevented the rape of Brienne by making her out to be a better hostage. And we are definitely rooting for Jon Snow to destroy the raping Crows of Craster’s Keep. All this suggests that the show’s creators wouldn’t dare make Jaime a rapist, as they have given us no reason to sympathize with a rapist before. But whether they meant to or not, that’s what has been done. And the stain of this offense will linger over the rest of the series, impacting how we read every scene between him and Cersei, affecting how we see his attempt at redemption. Where is justice for Cersei? (For a frank and thorough discussion about the rape scene, please click here.)

These thoughts killed a bit of the joy I believe we were meant to receive over the Brienne and Jaime scene. Here, Jaime attempts to fulfill his promise to Catelyn Stark by equipping Brienne with all she might need to find and save Sansa. He gives her his sword, forged from Ned’s Ice. It’s a touching gesture, the idea that the sword of Sansa’s father is being gifted to the Stark’s last loyal servant to help save their eldest (living) child. He gives her armor. And best of all, the gift that made my heart leap, he gives her the best squire ever. It caught me off guard, not only to see Podrick again—alive and not tortured!—but also to see him joining up with Lady Brienne! Is it too soon to wish for a spin-off?

I do wish the episode had ended with the pair riding off into the sunset, but instead we learned the fate of the Craster sons. It turns out they aren’t White Walker food, as I had assumed. Each Craster boy is plucked up by a White Walker, ridden untold miles to a glacial Stonehenge, then converted into White Walkerdom. Presumably they grow, and there’s not just an army of infant White Walkers crawling toward the wall… though that might just be creepier.