Game of Thrones Recap: The Lion and the Rose Purple Wedding | The Mary Sue

Game of Thrones Recap: The Lion and the Rose 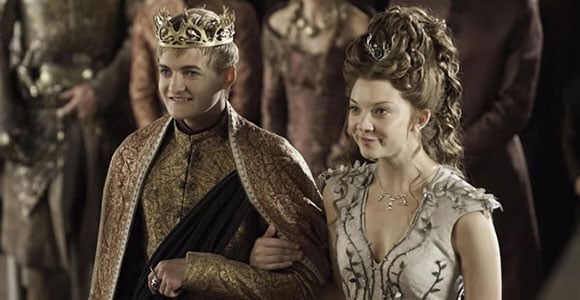 Last week Game of Thrones season four kicked off with some snappy teen dragons, a newly gilded Kingslayer and The Hound’s incomparable lust for blood/hunger for chicken. But this week saw some serious drama! Who had the best bit of banter? Which Lannister handles jealousy the best? And can you believe the final scene!? Dig into the recap, and sound off in comments.

[Editor’s note: We ask that book readers please direct their spoilery comments to this post. We want to keep this post clear of spoilers for people who might not know… uh… certain things yet.]

Let’s just say it at the top: King Joffrey is dead! Those who’ve read the books have no doubt been waiting for it. Those who haven’t have been praying for it. And after years of waiting, we at long last have a brutal and ugly death scene befitting a cruel, heartless, little punk of a king. So as not to tip spoilers on Twitter last night, I expressed my response to this development through the glory of GIF:

But I’m getting ahead of myself, pushing desert ahead of the meat of this juicy, juicy episode.

We started off at the dismal Dreadfort, where Ramsay Snow, the bastard son of the traitorous Roose Bolton, has been relentlessly torturing Theon Greyjoy Reek. I never thought I could feel for Theon after watching him be so gross and vile for so long. It wasn’t the hobbling of his shuffle, the dull look in his eye or the servile crook of his head that got to me. It was that genuine look of shock and pain that ran across his face as he heard Robb Stark is dead. For all his betrayals (which he’s not done dishing out, spilling out that Rickon and Bran are still alive), Theon still loved Robb… not that it mattered in his manipulations.

Interestingly, here we see Ramsay and Roose together for the first time, and that Ramsay and Theon share one thing: They are both disappointments to their fathers. That was the rousing theme of this episode. While Tyrion and Jaime drink together, the former describes the Lannister brood as “The Dwarf, The Cripple, and The Mother of Madness,” summarizing how they and Cersei disappoint Tywin. (Incest and murder is nothing compared to these, I guess?) By the way, did you catch how the ep cut from pained Theon to Tyrion stabbing into a sausage? That’s a mean (and hilarious) edit.

Thankfully Tyrion gave Jaime just the kick in the ass he needs to get training again, setting him up with Bronn, who doesn’t give a flying fig for class status or propriety. When Jaime snarled, “If I had my right hand–” Bronn interjected with a sarcastic, “Plan on growing it back?” From there I began to imagine an Oprah­-like talk show where Bronn dishes out real talk, probably while killing people or being surrounded by scantily clad prostitutes. That’s just how he rolls. I’d watch that. Hell, I’d live-tweet that on the daily.

Rejoining Tyrion, Varys warns that Cersei is onto Shae, which means Tywin will be. If Tyrion can’t get Shae to leave she will be killed. Or maybe be offered to Joffrey for target practice as a wedding gift? (Except he’s dead now! HA!) Being the exceedingly clever man he is, Tyrion knows the fearless Shae can’t be scared away from the arms of the man she loves. So he goes all Harry and the Hendersons on her, hurling heartbreaking words to push her away. And we see Shae crumble. It totally made sense for her character, and yet to see her crack felt so fundamentally wrong to me. She’s Shae the funny whore! She should never cry! But words have always been Tyrion’s best weapon, and he knew just where to strike. ~whimper~

Also proving to be a disappointment is Bran Stark, who is a long way from his home and family and is not coping well. To escape the many pains of his life, he’s been warging all over the place to experience life as a direwolf. But Jojen, Meera, and Hodor intervention his ass, telling him that too much tripping warging will make him forget everything that’s important, and they’ll lose him for good. (Please someone make a “The More You Know” about the dangers of warging. Thanks!)

Now to the pre-wedding celebration, and the biggest disappointment as a son: Joffrey. For a brief moment it almost seemed that Joffrey had experienced some growth as a human being, as he delivered an insincere but at least diplomatic thank you to Tyrion for the wedding gift of a massive history book. But then he promptly returned to be the raging brat we all love to loathe by plucking up his new Valyrian steel sword (of course he got it), and hacking the book to pieces. Smashy smashy beats wisdom every day; that’s Joffrey’s motto. But he couldn’t let it rest there. He had to dish out this little gem in front of poor Sansa: “Every time I use it, it will be like cutting Ned Stark’s head off all over again.”

Joffrey, for the record: You didn’t cut off Ned’s head. You had Ilyn Payne do it with a sword so big you probably couldn’t even lift it over your head.

Finally, we get to the wedding, or “the purple wedding” as in the color of Joffrey’s face by the end of the celebration. 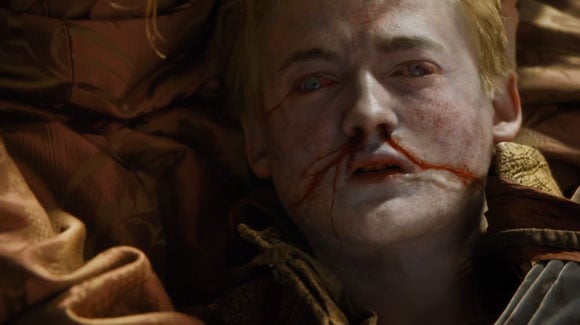 Before we go into the gorier bits, let’s take a second to recognize the restraint Margaery showed on her wedding day. By her standards that dress was downright modest. And the updo is sure to be a reference shot taken into harried hairdressers all prom season. It’s crazy to remember when Sansa used to dream of a day like this, and now she stands in the gallery married to one of her mortal enemies and eye-rolling like a damn pro. I know Sansa has a lot of haters, but she’s really grown on me. Everything her parents have taught her about honesty, respect of royalty, and the role of a lady has done nothing to help her in the lion’s den of King’s Landing. But she’s still standing. You go, girl.

Joffrey is really living for himself today.  Calling himself a hero and throwing all kinds of shade–or just things at anyone his new bride smiles at. Fun fact: that band of musicians Margaery was giving sultry eyes to? They are Sigur Rós.

“And not a soul to hear.” @SigurRos performing “The Rains of Castamere” in #TheLionandTheRose #GameofThrones pic.twitter.com/KAwFI7qlp8

Joffrey saves his biggest barbs for his little uncle, Tyrion. First with a tactless re-enactment of the clash of kings performed by dwarves (to use Game of Thrones speak), then with a prolonged quibble over wars, wine, and fealty. In the former Joffrey derides both of his Baratheon uncles, having Stannis riding a Melisandre dummy, and a bare-assed, giggling Renly riding what appears to be Loras Tyrell (take that, in-laws!) Then of course he makes a big show of Robb’s death, right in front of Robb’s mourning sister. Margaery may be his new bride, but torturing Sansa will always be Joffrey’s first love.

Meanwhile Joffrey’s parents Jaime and Cersei were laying claim to each other in the unhealthiest ways possible. Things might be chilly between these two lover/siblings right now, but that doesn’t mean they want any Knight of the Flowers or gender-bending lady-knight to step in. Cersei threatening Brienne was kind of hysterical as she comes up to the woman’s elbow. And it seems the one-handed Kingslayer can’t intimidate like he used to as Loras dishes snarkiness right back. When Jaime sneers, “You will never marry her!” Loras quips “Neither will you!” Zing!

I wrote in my notes, “Are weddings ever happy in Westros?” And then I learned they were because sometimes a tyrant dies at them.

After a match of wits and wills, Joffrey was screeching for Tyrion to kneel; Tyrion was risking his life by refusing. But thank gods for Margaery and pie! For all his big talk, all Joffrey got to slay with his Widow’s Wail was a book, a pie, and a pigeon. Then the cup he bullied his uncle into handing him sealed his fate. He died in his mother’s arms, and the so-called “peace” of King’s Landing is gone. Cersei blames Tyrion… but the wine bottle was sitting in front of Cersei. Was the poison meant for her? Or if it was for Joffrey, who planned this clever killing? The Tyrells? Sansa? The “fool” Dontos Hollard? That sexy Dornish prince? Or was it not the wine but the pie? (No fair telling if you’ve read ahead.)

So Joffrey’s dead. (Extra celebration GIF.) Ramsay and Theon are en route to Moat Catlin to reclaim it from the Greyjoys. Melisandre’s burning people up in the name of the Lord of Light. Bran is headed hard North. Tyrion is to be charged with treason. And already next Sunday feels too far away.

Finally, a goodbye from Jack Gleeson, who is officially retiring, not just from Game of Thrones, but from acting.