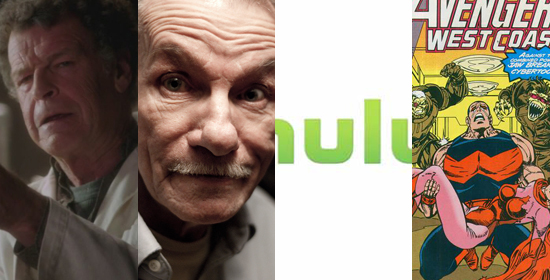 This week in Editors’ Picks: Rollin mourns a favorite television show, Ian returns to an old passion for unfortunate reasons, Glen misses a particular service, and Steven shows a little love to a old comic series.

I’ve probably already bored my friends and colleagues to tears, but I’m going to miss Fringe. There was just something so delightfully madcap and yet earnest about the show that kept me watching each week. You can check out my eulogy for Fringe here, and I’m certainly not going to say anything here that I haven’t already said there. I imagine it must seem like I’m rambling to some folks, but I also feel like those that have stuck through the seasons with me completely understand where I’m coming from.

Fringe got a chance, but it deserved better. Anna Torv, Joshua Jackson, and especially John Noble deserved better. I’ve been watching the early seasons again, and it’s only impressed me with how far the show’s been able to push its cast in such a short period of time. It was a wild ride, and I guess it’s time to close up shop. If there’s one good thing to come out of all this, it’s that I don’t have to wonder if the show will be renewed for another season.

Then again, there’s more than one of everything. Six seasons and a movie, right?

After a too long break, I’m getting some poetry back in my reading diet. I’m ashamed to say that it took a small tragedy — the passing of Jack McCarthy, a great poet and a wonderful person I was lucky enough to call a friend — to get me back on the horse, but I can’t help but be glad Im there now.

I don’t pretend that I knew Jack overly well. We knew one another through a poetry night in Bellingham, Washington that we both attended — he as a frequent contributor and regularly featured reader, me as an awkward writer working to find my voice and my path, and coming to the realization that I was largely outclassed in this arena by a bevy of exceedingly talented poets and writers in attendance.

Jack touched a great many lives in his time, both through his work and by the simple virtue of being an exceptionally kind, genuine, and approachable guy, and many of those lives he touched more deeply than my own. Even so, he always had a kind word and a keen eye for work that I considered generally beneath a man of his talents, and his input on my writing meant a ton to me at a time when I really needed it. I still remember the night when Jack asked for a copy of a poem I’d read that he wanted to try out on the road. It was one of my proudest moments as a writer, and a lot of years and a lot of bylines later, it remains one.

While I don’t think Jack would get any special joy out of me sharing his work — he wasn’t the self-aggrandizing sort — I like to think he would approve of me taking this moment to encourage anyone out there to get a little more poetry into their lives, whether it’s by going to your local open mic night or just dusting off that old copy of The Waste Land gathering dust on a bookshelf.

But if you’re going to get some poetry back in your life, and please do, because you won’t regret it, you could do a lot worse than Jack McCarthy, whose inimitable style and by turns heartrending and hilarious work offers a cure for those who may complain of not getting poetry, of finding the genre overly academic or highfalutin’ or inaccessible. Jack was as much a stand-up comic and storyteller as he was an award-winning slam poet, which you can see in his performance here on NPR’s Snap Judgment, reading one of my favorite pieces of his work. Jack wrote the sort of poetry that made me want to write poetry, and I don’t think I can offer higher praise than that. Rest easy, Jack. Everybody else, enjoy.

In October I finally ditched my satellite provider and now get all my television through the Internet. I bought an Apple TV, and signed up for Hulu Plus. It’s pretty great. I’ve had a Netflix account for years, but for as great at it is for movies, it’s really lacking where television is concerned. Hulu fills the gap nicely, and with the exception of watching Jeopardy! every night, I really don’t miss conventional television.

Last week I had to update my credit card information, and it caused some problem whereby Hulu lost my account. It’s been more than a week since I’ve been able to use the service, and I’m incredibly frustrated with their terrible, terrible customer service. It takes days to get a response to emails. I may as well write them a letter like in colonial days.

But it’s that frustration that made me realize that Hulu Plus, when it’s working, is great. I’m paying a small fraction of what my satellite bill was for the most part, and my television enjoyment has gone uninterrupted. I’ve even found tons of new shows to watch that I’ve really loved like The Yard.

Another great thing is that I find it harder to sit down and watch television just for the sake of watching television. I feel like I’m wasting less time watching shows I don’t really care about just because they’re on. I’ve been getting more stuff done around the house. Especially this week, since my stupid Hulu Plus account hasn’t worked at all.

Come on, Hulu, I love you so much. Please come back to me.

Though the film is no longer playing in theaters and has since been released on DVD and other formats, that isn’t to say that hype for The Avengers has died down — well, for the online fandom, at least. The community of devotees on Tumblr are still talking about the flick with the same level of vehement enthusiasm as they did months before it was even released in theaters. Sadly, not many people were convinced to start reading the original comic book adventures of Earth’s mightiest heroes, and were content to view the movie as the be all and end all of their range of understanding of Avengers continuity. In spite of this, it warmed my geeky heart to see a curious few hit the comic shop and catch up on the source material that made Iron Man, Thor, and the rest today’s cinematic icons.

Still, with this overnight boom in interest for the Avengers, there was still one offshoot of the team proper that — and even hardcore comic book readers are guilty of the following infraction — is constantly overlooked and a source of unwarranted derision: The West Coast Avengers. Making their debut in 1984, the West Coast Avengers were formed in response to an imminent threat that required separate teams posted on opposite sides of the continental United States. Led by Hawkeye — thanks to the movie you know who this guy is — he and an assemblage of heroes consisting of Iron Man, Wonder Man, Tigra, and Mockingbird safeguarded California and its pristine beaches well into 1994 when the series ended with over a hundred issues under the title’s belt.

At first glance the idea seems kind of silly since the name immediately brings to mind the Avengers hanging around poolside in sunny California. Okay, okay, maybe they did sometimes, and maybe the title absolutely reeks of the 1980s, but that’s not the point I’m trying to make here! In defense of the WCA, the team’s self-titled series was actually used as a launchpad for Marvel Comics’ major in-universe events of the 21st century, so that adds up to plenty of feathers in the team’s collective hat. Secondly, the West Coast Avengers are just pure fun, plain and simple. They may lack the punch of their counterparts, but the West Coast Avengers have had a multitude of great adventures that certainly entertain. Right now there are plenty of graphic novels featuring the team to choose from, but if you want to see where it all began, I recommend West Coast Avengers: Assemble — a great way to start appreciating such an underrated group of Marvel heroes.