Editors’ Picks 12/28: The Name of the Frog Fire King Saga 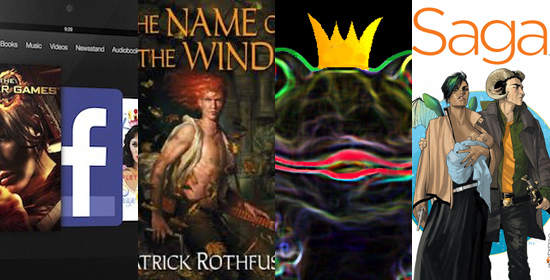 This week in Editors’ Picks: Rollin gets a new gadget, Ian keeps reading, Glen gets on the book train, and Steven’s pleased with a certain comic.

I’m a big fan of actually holding books in my hand, turning the pages, and all the hallmarks of the printed page. Such is the way of things when you have an English degree, I’ve found. It comes naturally. That said, it’s pretty rough trying to ride the subway and turn the page during rush hour if you didn’t manage to snag a seat. Sometimes it’s even rough if you did get a seat, what with people willing to cram themselves onto them.

That’s why my pick this week is the Kindle Fire HD. I’ve never been a tablet guy — this is the first I’ve owned — but I’m usually a fan of Amazon. When listing potential gifts this Christmas, the Kindle Fire HD was at the very top. My lovely parents made it happen, and I’ve been having a blast ever since I unwrapped it earlier this week. I’ve mostly been using it to watch Parks and Recreation so far, but that’s only because I’ve been working remotely the majority of this week.

The tablet’s not too big, and is smaller than the smallest computer I own, but the screen feels about right for what I’d want from such a device. Netflix and other applications don’t feel squished, and registering the thing was a breeze. While working, I usually set Spotify on a playlist and then just let it go. It’s great. I’m honestly pretty surprised at how pleased I am, and soon I’ll be reading books with ease during my commute.

Ian’s pick: The Name of the Wind

I’ve said it before and I’ll say it again — you all have just excellent taste in literature. Being a big artsy book snob, there are few things I value more highly or put more stock in, and your awesome recommendation of The Name of the Wind by Patrick Rothfuss is just the latest great book and series you’ve steered me towards.

I’m only getting to the midway point of The Name of the Wind, having been derailed from reading it by the second installment in The Dresden Files novels — another ca’’t-put-it-down series recommended by our Facebook friends, and Dathan Auerbach’s Penpal, which is as close to a note-perfect example of the horror novel as I’ve read in years, and I can’t praise highly enough. Before you ask, yes, I’m regretting putting it off.

The Name of the Wind is gripping, fun, well-paced, original, and most importantly in a fantasy novel — for me anyway — believable and relatable. Rothfuss’ characters are grounded and sympathetic without ever being boring or predictable, which is a wire that’s not easy to walk by any means.

I’ve got one more plane flight on this trip until I’m back home, and I can’t wait to put away — well, probably not the rest of The Name of the Wind, but one heck of a lot of it, that’s for sure.

It was either during my interview for this job, or on my first day here, that Rollin asked me what my favorite book was. It’s The Frog King by Adam Davies. Sometimes when people ask me my favorite book I say Great Expectations or The Great Gatsby, and I do love both those books. They’re great. It says so in their titles, but to answer the classic question of which book would I want if I were stranded on an island — The Frog King.

The main character is Harry Driscoll, a young editorial assistant making less than enough money to get by in New York City who dreams of being a writer. If you want to write a book I’ll get into, make it about a starving writer in New York. Chances are I’ll get on board.

Driscoll barely even qualifies as an anti-hero. He’s the worst. He’s drinks at work and shirks his duties. He’s awful to women and his friends. He wears dirty clothes and has rashes because he’s so filthy. He even mistreats a young homeless girl who only wants him to read to her. Harry Driscoll isn’t really the kind of guy of you want to root for. Unless you’re a starving writer in New York with a fair amount of self-loathing. Then you can get behind him pretty easily.

The closest thing to a redeeming quality about Driscoll is that he wants to be better, and not just in an abstract way, he wants to be better for his girlfriend Evie. He knows she deserves better than what he is, and the real tension in the story comes from Harry racing against himself to be the man he thinks Evie deserves before she realizes what a louse he is.

The Frog King is funny and romantic in a genuinely perfect balance. I reread it pretty often, and, when I do, I laugh and cry out loud, and not always at the same places.

If you pick up a copy, make sure you keep a dictionary handy. Davies’, and by extension Harry Driscoll’s, vocabulary is extensive. Harry uses words as gifts in the story, and competes in a vocabulary game regularly with one of his friends who is a lexicographer. Learning new and interesting words is part of the fun of reading this book, but my favorite is one Driscoll makes up to try to trick his friend in their game:

Protemplorate: (v) To make meaningful work during the hours made possible by meaningless work.

There are rumors that Joseph Gordon Levitt is trying to make a film version of this happen, and nothing would make me happier. Also, I would like to publicly admit that I stole my copy of the book from my friend Eric Smith of Geekadelphia.com, and I will never give it back. Ever. You hear me, Smith?

With the year 2012 drawing to a close, now is as good a time as any to look back at what I feel was a fantastic year for the comic book industry and its innumerable offerings. From “The Death of the Family” multi-title event running throughout the Batman group of titles to Marvel creative par excellence — Jonathan Hickman — taking over writing duties on The Avengers, I really am hard-pressed to say what this year’s true standout was. Hold on, I’m making this harder for myself than it really is. For my $2.99 a month, Image Comics’ smash-hit series Saga is your best bet for something that’s alternative and delivers a truly unique reading experience.

Penned by Lost and Y: The Last Man writer Brian K. Vaughan — see, you have your seal of quality right there — and illustrated by the incomparable Fiona Staples, the two deliver a sci-fi epic that, in this editor’s humble opinion, combines the absurdity of Douglas Adams’ The Hitchhiker’s Guide to the Galaxy, Star Wars, and Shakespearean romance into one flawlessly cohesive whole that ups the ante with each new issue.

Saga tells the story of Alana and Marko, a young alien couple whose respective races are engaged in a war that spans the galaxy, outsourcing it to other worlds and forcing the local inhabitants to choose a side in the conflict — and, no, there isn’t a third option. While their people tear planets asunder, Alana and Marko try to raise their infant daughter, much to the chagrin of their opposing homeworlds. Deeming the child an abomination, the two sides dispatch bounty hunters — known as “Freelancers” — to find the couple and have them pay for their treachery. That’s all I can pretty much say for now, though there are rocket ship trees and ghost monkeys that factor in to all these crazy happenings. Trust me, it only gets crazier.

Winter’s always been the perfect season to buy a new book to help pass the time during these droll, cold months, so why not make it the first volume Saga, currently available in trade paperback? You shan’t regret it, friend!