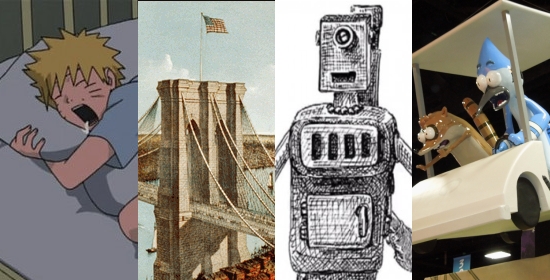 This week in Editors’ Picks: Rollin goes back to the basics, Ian dives into history, Glen keeps up with the classics, and Steven loves on the show that everyone else seems to not care about.

There’s something to be said for getting back to the absolute basic functions of life. Eating, breathing, and sleeping. Especially sleeping. I tend to sleep in fits, and whenever I manage to get a good night’s sleep it’s just about the best thing. That’s why sleeping is my pick this week.

That isn’t to say I’ve been sleeping well. In fact, I’ve been arguably sleeping worse than ever. That’s how I’ve come to crave true and proper sleep. This time has not only made me realize how much I truly need sleep, but what it feels like when I don’t receive. I wouldn’t go so far to say I’ve been miserable the past couple days, but I’m certainly somewhere in the same ballpark.

So, here’s to sleeping: May it stop eluding those of us that it tends to avoid.

Ian’s pick: The Great Bridge: The Epic Story of the Building of the Brooklyn Bridge

I’ve been in New York for just over two years now, and show no signs of living anywhere else in the near future, so it feels like about time for me to get a sense of the place and its history. (OK, fine, it’s probably past time, but I’ve been busy. Sue me.) For me, there’s perhaps no better way of learning about the character and history of a place than by learning about how people got around it, so I’m starting my trip through the history of New York with The Great Bridge, historian David McCullough’s acclaimed history of the building of the Brooklyn Bridge.

Glancing out the train window at the Brooklyn Bridge is the highlight of my commute most mornings, and I’ve walked it (which I recommend highly) and biked it (which I do not recommend at all) many times since I’ve been here, but I never felt as if I really knew the bridge until I began McCullough’s masterful biography.

The Great Bridge gives one a real sense of what went into the building of the bridge, and the obstacles — both political and technical — that almost prevented the bridge from ever being raised and the hardships faced by the seemingly indefatigable men behind the construction of one of the great architectural and engineering feats of American history.

McCullough, who has also written about figures like Harry Truman and Theodore Roosevelt, and turned his eye to momentous endeavors like the Panama Canal, has a taste for big picture projects. His real gift, though, is in finding the small details that breathe life into the characters that populate his histories, giving you the feeling of being on every pier and in every boardroom as one of the most ambitious construction projects in the history of the world takes shape.

If you have any interest in architecture, engineering, or American history, The Great Bridge makes a great primer on all three, while also introducing a cast of characters from all walks of life that you won’t soon forget.

In 2011, New South Books announced they would print an edition of the The Adventures of Huckleberry Finn replacing the one notoriously divisive word with “slave.”

There was some backlash.

The most interesting bit of protest to the New South Books plan came from comedians Gabe Diani and Etta Devine. They suggested that if they were going to replace the offensive word, why not replace it with something awesome? Like robots. So they did.

They wanted to make the point that robots have always been a stand-in for slaves in science fiction, which is a great point, but what I think they really did was they saved Huck Finn.

Students hate reading books they don’t connect with. I’ve worked in education, and have seen it first hand. The Adventures of Huckleberry Finn is a great book, but when you’re fifteen, that’s tough to realize. Modern teenagers aren’t building rafts and having adventures on a river. When I say Gabe and Etta saved Huck Finn, I don’t mean they just threw in some robots to make it more appealing to students. They raise a lot of points about race, and that word, in America in a way that readers can relate to and understand.

It isn’t that most of the characters in Huckleberry Finn see Jim as a black person, it’s that they don’t see him as a person. He’s a thing to them. He’s property to them. He might as well be a machine. It’s Huck who realizes that that’s wrong. It’s why the book shouldn’t be censored in the first place. It loses that meaning. The characters in the book aren’t just racists. They lack the fundamental understanding that Jim is a person.

Apart from helping readers better understand the book, the Robotic Edition also raises questions about the ethics we’ll all be dealing with in the future. Robots are a reality. They’re simple for now, but they’re getting more advanced, and some would argue more intelligent. When, if ever, would a machine be considered a person?

That’s a question we should start asking now, and Huckleberry Finn Robotic Edition is a great place to start.

The book has been out for a while now, but I started thinking about it the other day when Etta Devine tweeted about nominations for the Hugo Awards now being open.

I can’t think of any book I read last year that deserves it more.

Not including myself in this observation, but the general consensus among Geekosystem and our sister site The Mary Sue seems to be that Adventure Time is the be all and end all of geek-oriented cartoon series. Am I hating on Adventure Time? Not by a long shot. In fact, I commend Pendleton Ward for the runaway success of his creative brainchild, but the truth is the madcap adventures of Finn and Jake just didn’t click. I watched a handful of episodes, chuckled at some of the jokes, and yet I’m still not seeing what everyone else apparently is. Maybe that’s because another animated series on Cartoon Network has stolen my heart faster than a grilled cheese sandwich left unattended on the kitchen counter: Regular Show!

Admittedly, my initial impression of Regular Show — based on the promos — wasn’t as enthusiastic as they are now, if not jaded. “Fantastic,” I venomously thought, “yet another cartoon with a cast of incongruous characters for the sake of being quirky and random.” With the sorry state of most cartoon shows now it was easy to fall into this state of mind, but wishing to broaden my horizons, I decided to watch an episode and quickly realized how terribly, terribly wrong my judgement was. Today, I’m proud to count myself among the legion of devoted Regular Show fans, happy to know that the adventures of Mordecai, the blue jay, and Rigby, the raccoon, are there to brighten up my droll Monday evenings.

It’s difficult to summarize Regular Show since it involves so much, but all you really need to know is that Mordecai and Rigby are a pair of ‘80s-obsessed slacker park employees, with their screw-ups often resulting in world-ending cataclysms only they can resolve. That and Mark “Luke Skywalker and Joker” Hamill is a part of the show’s cast, so if you needed any more of a reason to tune in, there you have it. So if you’ve seen promos for Regular Show episodes peppered throughout Adventure Time’s commercial breaks, by all means, don’t hesitate to give it a chance. It’ll give us something to talk about.