Keep talking and take my money. E3 2015 was one of the best years for playable female characters in recent memory – especially after the bleak, sad stubbly white dude landscape of 2014. This year’s conferences gave us lady protagonists that were not only the traditional elves and clerics, but also engineers, astronauts, tanks, and more. Here are twenty-three games straight from E3 with kick-ass women we can’t wait to play.

From the lead designer of StarCraft and Guild Wars, Gigantic is a third-person shooter MOBA. If you want female character options, Gigantic’s got em: you can play as Imani, a one-eyed WOC with a giant crossbow; Xenobia, the dark magic Shadow Witch; Vadasi, a Hindu-inspired goddess; Mozo, the magician; Tripp, the stealthy rogue; Grisemla, the portal and beast summoner; or Aisling, the sword-wielding melee gal. Heck yes.

I’m probably the biggest Mass Effect fan in the galaxy, so it’s no surprise that I fell on the floor shrieking during this trailer. You’ll be playing as a human of either gender, exploring the Andromeda galaxy. And don’t fret: according to this BioWare blog, the man in the trailer is not the playable character – you can see the actual playable character design here (points off for the sexy lady pose, though).

Faith Connors is back in this prequel to the first Mirror’s Edge! The new game features a huge world to explore and has completely removed the use of guns, plus (of course) a playable WOC lead. Let’s hope that it doesn’t fall prey to the origin story issues of Tomb Raider and remove all of Faith’s agency/see her crying a lot.

I absolutely loved the gameplay in the first Tomb Raider, but hated the story so thoroughly I had to turn off my brain and pretend I was playing a Katniss simulator (which, honestly, was awesome). Let’s hope everyone who told me that Lara would totally be badass in the second game, we swear, was right.

Did someone jump into my brain and make a game especially for me? Because Horizon Zero Dawn sure seems like it. Aloy is a post-apocalyptic wildling-type archer who has to take down the hordes of robot dinosaurs (!!!!!) who have taken over the planet in humanity’s decline. It has no loading screens, was designed by the same guy who wrote Fallout: New Vegas, and a PlayStation exclusive, and I’m crying a lot thinking about it. 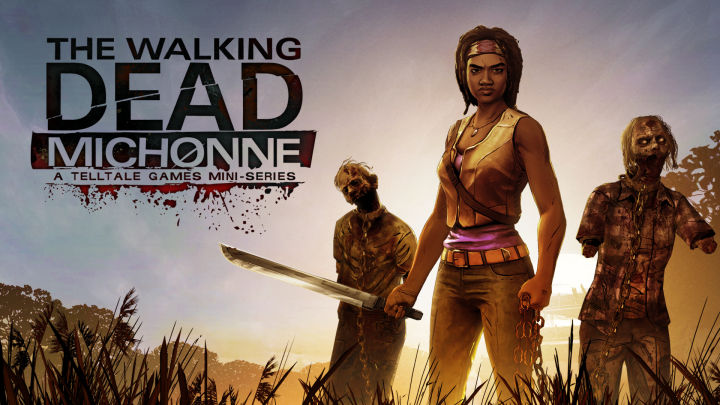 We won’t see another full series of Telltale Games’ The Walking Dead until 2016, but who cares because we’re getting a Michonne mini-series! Michonne’s story doesn’t tie into the main game, and takes place in the comics between issues #126 and #139 – when she goes off on her own for reasons as yet unknown. But not for long.

A female robotics engineer and a robot dog? Sign me the heck up. ReCore stars Joule, a nomad in a desert environment, is (as far as she knows) the world’s last human survivor, and travels with her robo-pup, Mack. Joule must discover what happened to everyone else, while using her tech powers to make sure the the cores of her companions (containing their souls) always have a body in which to live on. ReCore is an Xbox One exclusive and will be out next spring.

The protagonist seen in this trailer is one of three in this sequel to 2010’s cult hit NieR – though apparently the game will share little in common with its predecessor. It’s made by the same folks who do Bayonetta so your mileage may vary, but they have brought on character designer Akihiko Yoshida (Bravely Default, Final Fantasy), so we’ll see!

A gorgeous indie coming soon to Xbox and PC, Beyond Eyes follows Rae, a blind ten-year-old who must overcome her trauma and fear of the outside world to find her lost cat, Nani. Basically, you’re playing as an awesome tiny girl Daredevil. Plus, it’s made by Dutch developer Sherida Halatoe, so you’ve got a rad lady on the dev end, too.

Whaaaat, another WOC playable character? You’re Alex Oshima (aka Sandra Bullock in Gravity), trying to survive in the wreckage of her destroyed space station above Earth. Completely zero gravity, you have to monitor your oxygen as you try to survive the catastrophe. The game is entirely first-person, and is apparently really, really nuts on the Oculus Rift.

Fullbright’s follow-up to the incredible Gone Home, Tacoma puts you in the body of astronaut Amy Ferrier aboard the titular Earth-orbiting space station. Set seventy years in the future, Ferrier and her computer Odin must discover what happened to her missing crew. With a creepy BioShock feel and a story-driven exploration style, we can’t wait for this one. It’s coming to Xbox and PC first, but will eventually be available for PlayStation.

We gave Ubisoft some serious shit last year after their whole “women are too hard to animate!” debacle – but it looks like they might actually be learning from their mistakes. In their latest offering, set in Victorian London, you can play as both Jacob Frye and his sister, Evie. At the Sony E3 presser, we got this Evie-heavy trailer for the game and were pretty excited about it. She’s proficient with hidden weapons like the cane sword and throwing knives and also with stealing out hearts.

Four hundred years before the original Fable, you can either play in four-player co-op as the heroes, or in a more strategic role as the villain. While more characters are expected to be announced, right now playable lady heroes include Inga, the sword-and-shield Protector; Glory, magical Marksman; Celeste, healing Support; Winter, a frost mage Controller; or Evienne, a two-handed tank. Also, did you hear freaking Lena Heady in the trailer?

A free-to-play third-person action game, Battlecry lets you choose your gender in any of the playable classes: Enforcer, Tech Archer, Gadgeteer, Brawler, or Duelist. After a world-destroying war at the end of the 20th century, after which gunpowder was banned, creating a cool steampunky alternate history world. You can play as part of the Royal Marines or the Cossacks in battles of up to thirty-two people. It heads into Beta this year.

Admittedly the Tom Clancy games aren’t my kind of thing, but in this “action RPG” you can fully customize your character – including gender (wow, Ubisoft, really doin’ well, here). And then you can shoot at stuff. Shooty shooty shooty bang bang. It’s out next March.

Yes. You guys, yesssss. In this follow-up to the steampunk stealth hit Dishonored, you can continue to play as Corvo (why?); or you can Emily Kaldwin, the girl you had to rescue in the first game. Now this is what I like to see! Screw rescuing the girl; let’s do the rescuing ourselves, thank you very much. Set fifteen years after the first game, you’re trying to restore Emily to power as the rightful heir to the kingdom and I’m just still so happy about this. Cara Ellison, a huge proponent of women in games, is working on it, so I know we’re in good hands with the storyline. It’s out next spring.

Let the lil’ babies cry about it – you can play women’s teams for the first time in the new FIFA, including Germany, USA, France, Sweden, England, Brazil, Canada, Australia, Spain, China, Italy, Mexico. They feature authentic likenesses of all the actual lady footballers, and mo cappedplayers like Canada’s Christine Sinclair, USA’s Alex Morgan, and England’s Stephanie Houghton for maximum authenticity. Like IRL, women’s teams can only compete against other women’s teams.

War never changes, and neither does the fact that you can play as a dude or a lady in Fallout. Also, the dog is unkillable. Phew.

Based on Celtic myth, this game follows protagonist Senua into Hell, as she battles manifestations from her own mind. There’s a great development diary on her character from publisher Ninja Theory, which basically starts with them saying, we heard people say that games with female leads don’t sell well but we’re an indie dev and we’ll do whatever the heck we want, thanks very much. Inspired by the recent discovery of a previously-unknown Celtic goddess, Senua, they’ve made her “a challenging female form: not sexy, not skimpy, not young, not skinny, yet stunning, compelling, and believable.” Flawless.

WoW developer Blizzard’s new PC game, Overwatch, is a team-based multiplayer shooter, and seems to be direct competition for Team Fortress 2. You’re restoring peace to a war-torn world, etc, but more importantly: ZARYA. When’s the last time you’ve seen a playable female character that looks like her? They’ve got something for everyone; besides tank Zarya, there’s assassin Widowmaker, reality-manipulator Symmetra (a WOC!), healer Mercy, big-gunner Pharah (another WOC!), and time-jumper Tracer. They’ve even helpfully created cosplay reference guides for each character!

You know the people who brought us Borderlands are going to create something excellent with Battleborn. A MOBA-style shooter that will feature twenty characters on release, the game is space-fantasy, set in a time where the universe is slowly being destroyed and all of its different species must come together to figure out what the heck is going on. Three of the ten current characters are ladies – inventor Pheobe, rogue Orendi, and archer Thorn.

We don’t know much about this third-person indie survival RPG, but it follows your wandering character in search of a home. Exclusive to Xbox One and PC, this looks like a game worth following.

We are no longer relegated to multiplayer! In the new Black Ops, you can completely customize your campaign character, including choosing to be a gal. In a preview for Gamespot, Chris Watters said, “According to Jason Blundell, the campaign director for Black Ops III, they took inspiration from the character of Commander Shepard in the Mass Effect series; a strong character can be a strong character without the world around them bending to accommodate their gender.” You don’t say.