Readers, meet Charlotte Corday. She was born in 1768, and at the age of twenty-five was executed by guillotine. Her infamous contribution to the history of the French Revolution was immortalized by two master painters of the era, and one later French revolutionary and poet would give her the nickname l’ange de l’assassinat. What was she so famous for? 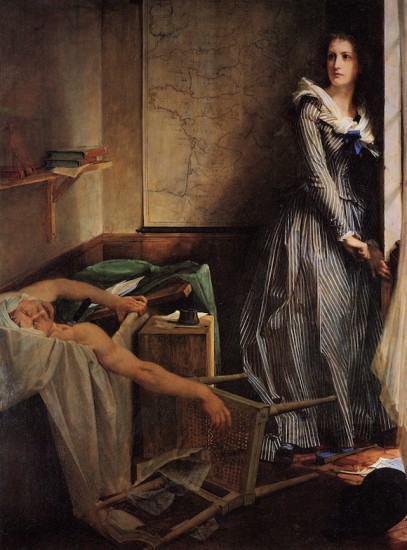 For killing journalist, politician, and one of the leaders of the Reign of Terror Jean-Paul Marat with a single, cold-blooded thrust of a kitchen knife. The death of Marat is one of the most infamous, romanticized (in the capital R Romanticized sense) deaths in the French Revolution, a deliberate, successful assassination by a young, country-born, educated minor noblewoman of one of the primary instigators of the Terror. At her trial, Corday’s explanation of why she had taken it upon herself to murder him was succinct: “I killed one man to save 100,000.”

Why do I mention her? Because I think it’s good context for Ubisoft’s E3 announcement that they really wanted to put a playable female character into Assassin’s Creed Unity but it was just, you know, really hard, so they didn’t, and that it’s just “the reality of

production.” Now I can hear the folks running up to tell me why this is reasonable for Ubisoft to say so lets just get in ahead of them and drill down on some facts here.

Assassin’s Creed Unity is the newly revealed next installment of the blockbuster Assassin’s Creed franchise, produced by industry giant Ubisoft. In a series first, it features multiplayer content, in which four players at a time can cooperate to complete missions as titular assassins. None of those multiplayer characters will be female. They will all be doubles, essentially, of the single-player campaign’s PC, Arno. In an interview with Polygon, Ubisoft creative director Alex Amancio explained that the development team on Unity had really wanted to make a playable female multiplayer character, but decided that making more clothing for their male character was more important.

“It’s double the animations, it’s double the voices, all that stuff and double the visual assets,” Amancio said. “Especially because we have customizable assassins. It was really a lot of extra production work.”

In the game’s co-op mode, players will have custom gear but always view themselves as Arno, Unity‘s star. Friends are displayed as different characters with the faces of other assassins.

“Because of that, the common denominator was Arno,” Amancio said. “It’s not like we could cut our main character, so the only logical option, the only option we had, was to cut the female avatar.”

Bruno St. Andre, level designer for the game, told Polygon that “more than 8,000 animations would have had to be recreated on a different skeleton.” Which is obviously just impossible, I mean it’s not like that’s exactly how Mass Effect‘s customizable main character has worked for three very popular games. But lets take a look at these male character designs that are so detailed, individualized, and distinguishable that it would have been twice the work to create another. 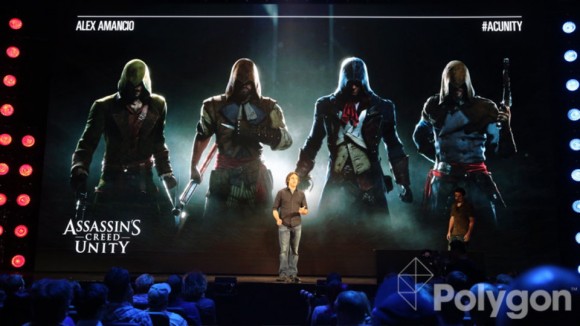 Oh. I see. Yes, it would indeed be “double” the work to make one of four characters female, if those four characters are the same dude in palette swapped outfits. And if your idea of “female character” necessarily demands a completely different way of dressing and moving than a male character. Amancio says that cutting a female character design was the only “logical” solution, but it is simply, farcically, not. There are at least two more that would have allowed for playable women in multiplayer.

1. A more androgynous player character, whose movements and physicality could be ascribed to either gender, so that a female player character in multiplayer could be distinguished by facial features or exposed (braided, obviously, lets just leave hair physics out of it) hair. Of course, I’m making the risky assumption here that the Unity team has made Arno’s movements identifiably, obviously masculine in some way, perhaps by making him sit bowlegged on the subway or having him pause to adjust his balls every five steps. Also, the assumption that the team is mentally capable of imagining a woman in male dress.

2. Making the main character of the game a woman, and basing all the multiplayer characters on her instead. But who am I kidding. The idea of a triple A game without a playable male character, that’s laughable, isn’t it? I mean, a new Tomb Raider just came out like two years ago, so we’re good for at least half a decade.

It is 2014. The “it’s too much work” excuse for cutting playable women from your game no longer flies. It is reasonable for the production of any expensive media project to prioritize according to effort and reward. But it is too clear, too blindingly obvious at this point that this is coded language for “we think male characters are more important than female ones, because decades of institutionalized sexism in our industry have created a self perpetuating loop of devaluing female characters even when we are one of the biggest money makers in gaming.” As our own Sam Maggs says:

You can have your all male assassin team, Ubisoft. But don’t piss on my leg and tell me it’s raining.