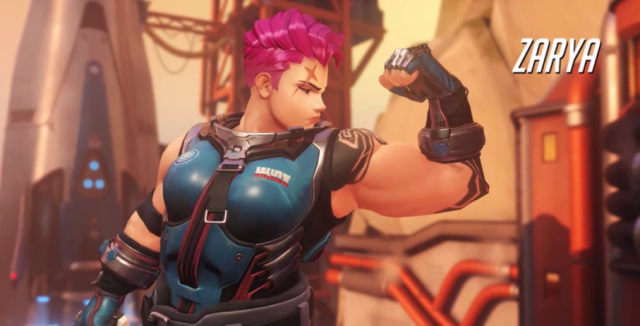 We’re admittedly pretty pumped for the diverse roster we saw in the last Overwatch trailer, but one thing still worried us: the lack of body diversity among their female characters, who underneath all the armor appeared to share the same “generic sexy thin-framed game lady” build with one another. Well, good news! Blizzard has heard our concerns, and their latest  is exactly what we were looking for—somebody ripped as hell.

Announced today at PAX East in Boston—along with a Western-inspired male gunslinger, McCree, who is also pretty cool too—Zarya is the third tank option (behind Reinhardt and Winston) and the first and only female tank in the game. Her character bio lists her as a Russian former weightlifter who gives up her dream of becoming a champion to join the Overwatch team and save the world.

The character, the developer says, is a direct response to a call from fans and critics for more examples of body diversity in their line-up, which they constructed specifically to allow for more racial and gender diversity in the first place. “We’re listening and we’re trying hard,” Blizzard told press at the unveiling.

Judging from this gameplay footage, they did a pretty great job. Personally I tend not to play tank characters very often (partly because I love playing speedy rogue-types and partly because female tanks are so hard to come by and it’s more fun for me to play my own gender when it’s possible), but I am endlessly compelled by Zarya here. Yes! Shoot and shield everything!

Also, who loves her dyed hair as a bonus?

Obviously Blizzard can continue to improve as they add new characters to the game—like we said when we first saw the trailer, there’s plenty of room for a female non-human like the gorilla,Winston, or an android like Zenyatta or Bastion who isn’t automatically coded as male. It doesn’t seem like there are any black characters either yet, which is also something Blizzard should consider for next time as well (although major props to them for giving Symmetra a dark skin tone that’s fairly uncommon in media depictions of Indian women). But overall, it seems like they’re legitimately interested in creating interesting, diverse characters, which is what makes Overwatch really stand out.

The game’s beta will begin this fall, Blizzard says. Will you try it out?