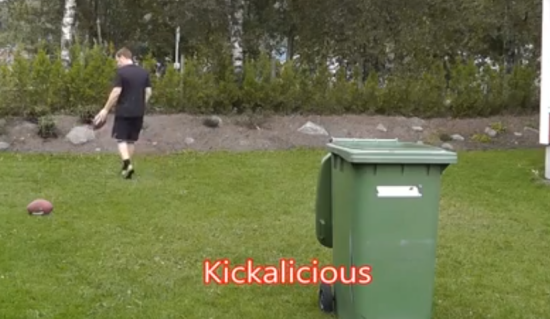 We don’t typically pay much attention to sports news here at Geekosystem. Our friends at SportsGrid do a great job of covering that stuff, but this is a prime example of worlds colliding. The Detroit Lions just signed YouTube sensation Havard “Kickalicious” Rugland as their new kicker. They’ll really clean up this season if the NFL changes its rules to include casually kicking a football with the back of your foot into an open garbage can.

In case you’re not one of the three million people who have seen this, or if you just want to spend four minutes watching a guy do some crazy stuff to a football while listening to The Dropkick Murphys, here’s the video that got the Lions’ attention:

That is no doubt some pretty impressive stuff, but one fact the Lions might be overlooking here is that when you’re kicking a football to your friend on a boat for a YouTube video you can as many takes as you want. Although at one point in the video, Rugland does kick six straight 50 yard field goals. Even with no one trying to knock you over, that’s impressive work. It probably is. I don’t know much about football, but I’m pretty sure I couldn’t do it. I bet Batman could do it. Maybe the Lions should sign Batman.

If the Lions are just throwing money at YouTube for their talent pool, maybe there are some more acquisitions they could make from the site. May we suggest they hire Tay “Chocolate Rain” Zonday to do the halftime show?

Think about it, Detroit, because this is the most interested in football I’ve ever been.