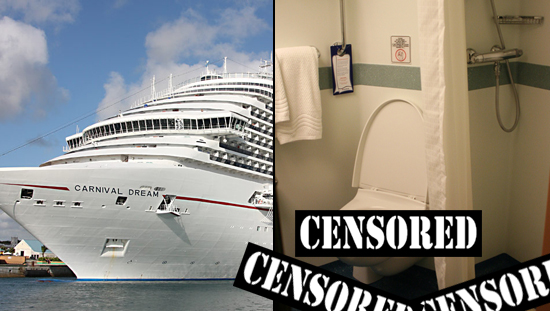 Look, if you’re on a cruise, there aren’t too many things worse than hitting an iceberg. That still takes the cake, but there are some things worth avoiding, if you can help it. Like being dead in the water for days without power, as we’ve seen before. But at this point — with so many malfunctions — shouldn’t we all just expect it? Fool me once, and all that? So the problem is us, not them. For example, Carnival Cruise Lines just had another power — and sanitation! — problem with one of its ships in the Caribbean. When toilets stop working on a vessel with more than four thousand passengers, unpleasantness will ensue.

Said one disgusted passenger to CNN on Wednesday, when the problems began:

“There’s human waste all over the floor in some of the bathrooms and they’re overflowing — and in the state rooms.”

St. Maarten — where the Carnival Dream is currently stranded — was supposed to be the final stop of the 7-day Caribbean cruise before it turned homeward to Florida. That’s where the technical problems, which began two days ago, peaked. Passengers couldn’t use the bathrooms, but neither were they allowed to leave the ship. That’s a recipe for angry, smelly passengers.

It didn’t help that they overbooked, as they do. The Carnival Dream can handle 3,646 passengers but it had more than 500 guests more than that, not to mention a smaller crew than the ship can staff. Carnival announced that they would not be sailing home, because of the mechanical issue with a diesel generator — which powers its elevators and restrooms.

Interestingly, Carnival’s estimation of the conditions did not seem to match the passengers’ outcry. They stated that “only one public restroom was taken offline for cleaning based on toilet overflow” and that “there have no reports of issues on board with overflowing toilets or sewage.”

In any case, this was Carnival’s announced compensation for the entire episode:

While personnel continue to work on the technical issue we are making arrangements to fly all guests home via private charter flights and scheduled flights from St. Maarten. Guests on the current voyage will receive a refund equivalent to three days of the voyage and 50 percent off a future cruise.

We are also canceling the ship’s next voyage which is scheduled to depart on Saturday, March 16.

Did you hear that? 50 percent off a future cruise! We’d consider going if they just came clean — in a manner of speaking — and renamed the cruise to something that set realistic expectations. This has clearly been anything but a dream.

(via CNN.com, images courtesy of Miss Shari and steamboatsorg on Flickr)