New iPhone App Will Test Your Pee, Justifies Using Your Phone In The Bathroom 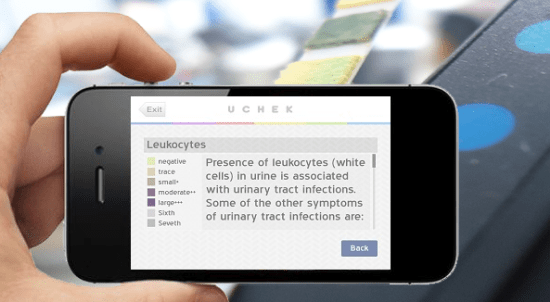 Everyone knows you’re using your phone in the bathroom, because everyone does it. It wasn’t going to be long before someone decided to make an app that really integrates your phone into the pee experience… peexperience? In case you were wondering — and even if you weren’t — that time has come. The new app Uchek tests users’ pee and keeps track of the results, giving people an inexpensive way to analyze their pee over time. Since that’s something we’ve all been desperately wanting.

Ucheck is the brainchild of 29-year-old Myshkin Ingawale who introduced it at the ongoing TED 2013 conference in Long Beach, California. At an earlier TED conference, Ingawale introduced a device to test hemoglobin in the blood without needles.

His latest project can be used to test and track levels of different compounds in urine including glucose, proteins, nitrites, bilirubin, and more. Tracking this data — thankfully — does not involve peeing on your phone. Instead, you collect a sample in a cup and dip a test strip. The app uses the phone’s camera to analyze the color of strip to give you results.

Ingawale tested the app on over 1,200 samples and found that it did a better job than humans who were reading the strips. Dedicated urine analysis machines might be more powerful and accurate than the Uchek app, but the trade off of price and level of ubiquity of iPhones means the app can make a huge impact in the world of pee data tracking. Not everyone has a $10,000 urine analysis machine, but almost everyone has a smartphone, and almost everyone has 99 cents to pay for the app and $20 for a pack of test strips.

The Uchek isn’t just a fun excuse for me to write about pee, it’s also a step in the direction of easier access to medical information that is incredibly affordable for everyone. Users can reliably track information about their health at home rather than having to pay high medical costs for the same data.

The app is currently being tested in a Mumbai hospital, and is working its way through the tenuous App Store approval process, so you can’t start tracking your pee stats just yet, but it’s likely coming in the very near future.

(via Wired, image via Ucheck)