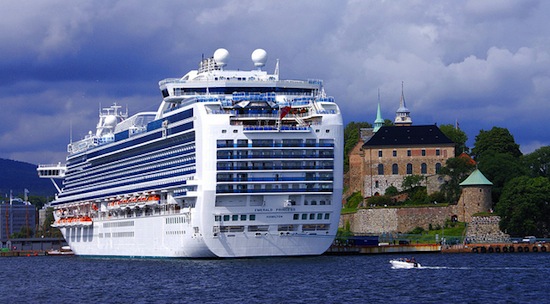 Considering the the stress that can be involved in flying across the country to brave baggage claims, TSA lines, and winter weather, it’s not surprising that to some people, a nice long Caribbean cruise seems like the perfect antidote to the traditional travails of the holidays. Of course, those cruises aren’t without their own hazards — case in point, the 400 people sickened with what appears to be nausea- and diarrhea-inducing norovirus on two recent holiday cruises. All of a sudden, sitting through yet another round of Mom’s favorite holiday pastime — “When are you going to meet someone nice and settle down?” — doesn’t sound so bad.

Rather than the relaxing ocean voyages they had been promised — and that many had paid upwards of $8,000 for — passengers on the Queen Mary 2 and the Emerald Princess found themselves on essentially plague ships. Even worse, norovirus is easily transmissible from person to person, which serves to make passengers wary of interacting with one another or touching anything that another passenger has laid hands on.

Most passengers exhibiting signs of the disease have been confined to their quarters, which may seem like a little much, but speaks to how easily norovirus can spread, as well as how dangerous the disease can be to vulnerable populations like children and the elderly. Outbreaks like these can basically turn a cruise into one ong game of “the floor is hot lava,” except that passengers replace imaginary lava with gut-spasming poison, and the floor with everything. Considering the symptoms of norovirus make it ill-advised for patients suffering from the virus to be out of sight of a bathroom at any point, though, confinement to quarters doesn’t sound like such a bad thing. At least it will allow sufferers to catch up on their reading and, we presume, make lists of things they would rather do next Christmas.

One passenger pointed out that the virus outbreak has, perhaps unsurprisingly, left spirits on the ships not exactly in keeping with the festive nature of this time of year, telling the Telegraph that:

“The mood is very sombre, it’s not the Christmas atmosphere we were hoping for.”

We can relate — we know there are generally some warts to be seen with the holiday, but even for us clenched bowels and confinement to quarters seem like pretty rotten ways to spend the holidays. If we’re going to get sick at Christmas, we’ll do it in the traditional manner — fighting with Dad about politics and then spewing egg nog and Jameson while crying into the toilet, wondering why we do this every year. It may not be pleasant, but as far as holiday traditions go, its right up there with watching Die Hard and the airing of grievances, and as rank sentimentalists, we’ll stand up for those hallowed traditions any day.