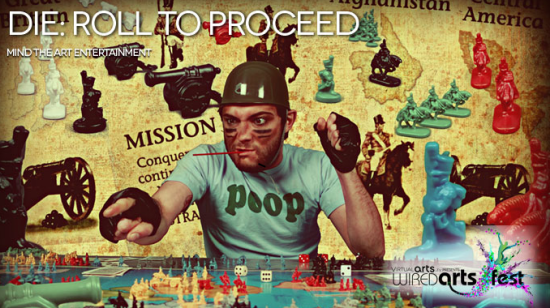 I don’t think there is a rule in society that is both so universally agreed upon, but still ignored as not using a cell phone in a theater. Everyone hates it, but everyone does it at some point. At the WiredArts Fest, though, not only is cell phone use allowed — it’s downright encouraged. They want you tweeting about the shows, snapping pictures with Instagram, and even streaming the events from the comfort of your home. It’s a new approach to the relationship between social media and theater, and it’s one I’m kind of into.

The WiredArts Fest is the product of VisualArtsTV, a site that claims to be “Turning the performing arts into an interactive global event.” The physical festival is happening now through March 2nd at the New Media Center at the Secret Theater in Long Island City, New York, but the whole point of the festival is to provide a global audience for the performances.

If you want to see these plays the old-fashioned way, you can purchase tickets through VisualArtsTV.com for $18, or you can get a high-quality, commercial-free stream of the shows at a price of $2.50 per show or for a $35 festival pass. You can also watch the shows for free on the festival’s Ustream page, but that comes with commercial interruptions.

These feeds aren’t the kind of one-camera-in-the-back-of-the-room wide-shots so often associated with live events being viewed online, there are four cameras with human operators moving with the action of the play, and a director cutting between them with an eye for online viewing. The founder of VisualArtsTV, Kathryn Jones, said, “We cut very very quickly and we tend to shoot in tight shots because when you are online you are always leaning forward and looking for something else to do and someplace else to go.”

The festival is geared towards creating a more involved experience between performers and audience, which is something that’s already happening in other media, especially television. Live-tweeting television events like tonight’s Oscars has become common practice, and VisualArtsTV wants to bring that kind of audience engagement to the stage, and to bring the stage to the virtual world.

This is the kind of thing that might take some getting used to, but thankfully you can stream the festival for free to try it out. Go ahead and catch one of the shows online and feel free to tweet about it all you want. They won’t mind.