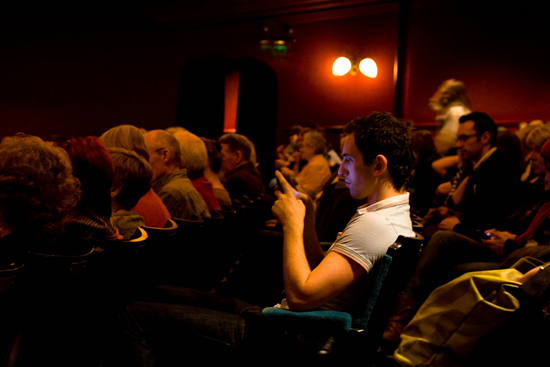 Bits and pieces of theaters being sectioned off for smartphone usage isn’t exactly a new idea, but it’s still depressing whenever it crops up. Call me a purist, but my preference is to engage with the screen or cast as if there weren’t another soul in attendance. As we increasing move towards an age where folks can’t bear to be separated from the phones for even a few hours, it looks like I’ll be increasingly in the minority. As another nail in that coffin, Guthrie Theater in Minneapolis, Minnesota began offering tweet seats this week so the audience can engage with the show via platforms like Twitter.

The so-called tweet seats that Guthrie Theater is offering are for four consecutive Thursday performances of the play The Servant of Two Masters. As of writing, we’re one down, and have three to go. Despite claiming that the entire thing is to provide for a new avenue for the audience to engage with the play, it certainly seems like this would be an effective way of sectioning off those that absolutely must tweet everything that’s happening around them.

As previously mentioned, this isn’t really a new idea. It’s just a depressing one that’s garnered traction during 2012. Social media’s likely here to stay, though, so expect something like tweet seats to stick around in some shape or form. One can only hope that it’ll be less intrusive than anything currently out there.