The Walking Dead Recap: Made To Wait 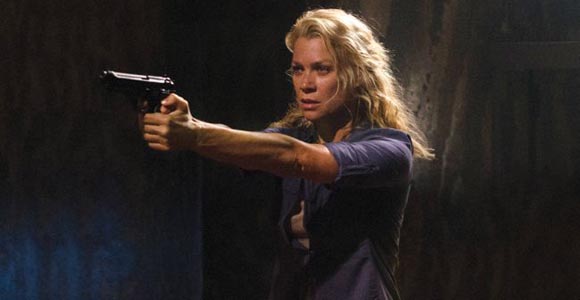 The midseason finale of AMC’s The Walking Dead was titled “Made to Suffer.” So, did we?

Tyreeeeeeeeeeeeeeese! We heard he was coming but I had no idea it would be this soon, or that he’d play such a big role in this final. But there he was, in all his hammer smashing glory. His group is on the run from walkers, one of their own is bitten, and they stumble upon the prison. Only, it’s a part of the prison we haven’t seen – a giant portion of the brick is destroyed and for a moment I thought we were perhaps seeing a glimpse of the end of the episode, after The Governor’s people had attacked the prison. But no, seems our survivors just haven’t gotten that far yet and this is the source of all the walkers in the prison.

We don’t see too much more of them in the episode but we do get to see Carl save the day. He goes off by himself to investigate screaming and winds up finding Tyreese’s group in the ever-problematic boiler room. He gets them to a safe spot in the prison then proceeds to act just like his father, and lock them in. Not everyone in their group is happy about this but Tyreese realizes the position they’re in and thanks Carl. Meanwhile, prisoner Axel is starting to creep on 17-year-old Beth, then Carol, you know, after learning she is not, in fact, a lesbian because she has short hair.

In Woodbury, things are tense as ever. Michonne has led Rick, Oscar, and Daryl to the gates and they find a side entrance to slip in. Someone from the town notices their presence but thinking it’s just another resident, the guy isn’t so careful when investigating. Rick tries to get him to tell them where Glenn and Maggie are being held but he has no clue so they tie him up and knock him out so he can’t alert anyone.

In the make-shift torture chamber, Glenn has thankfully given Maggie his shirt to wear then stops hugging her so he can rip off a walker’s arm. Even Maggie was grossed out. But it was for a good cause – Glenn ripped out the guy’s arm bones so he and Maggie could use them as shivs when Merle and crew came back. They were able to take out one of their captors before being surrounded but they didn’t have to wait long before Rick & Co. showed up with their arsenal.

And then, there was a lot of shooting.

Honestly, this whole scene disappointed me a great deal. I was expecting…something, anything to happen and nothing did. No one from our survivors is hit – except Oscar – who is quickly shot in the head by Maggie on the way out the door so he doesn’t turn. And hey, it’s probably just a coincidence they introduced another African American man before offing this one, right?

The highlight of the episode was Michonne’s side mission. She left Rick & Co. to hunt down The Governor but while waiting in the dark for him, she hears a noise coming from his secret room. Her reaction to his head aquarium was pretty great but what I wasn’t expecting was her thinking his locked up daughter was alive. It makes sense she would think that but seeing a vulnerable side to Michonne was unexpected. Just as she’s about to take out zombie-daughter, The Governor interrupts but he’s too concerned for the welfare of his daughter to do anything but lay down his weapons. And Michonne does the only thing we can expect from her – she impales the daughter with her sword.

And then, all hell breaks loose.

This is a fight that will go down in history. The Governor lets our his rage on Michonne and she does everything she can not to be a victim. Both get pretty roughed up but then score one for The Governor when he throws Michonne into his aquariums. Gross. Also, we find out those heads were never stabbed, shot, etc. when one of them flops open mouthed on the floor like a fish trying to breathe. Instead of getting to use her sword on him, Michonne uses the broken glass from one of the aquariums to stab him in the eye hardcore. She would have finished him off if not for Andrea interrupting. They don’t get much of a reunion though, Michonne simply runs off.

And Andrea is totally sympathetic to The Governor even though she sees the aquarium and his zombie-daughter. Andrea, you might be too far gone to be an awesome character. I’m sorry.

We’re left with an interesting, yet entirely unimpressive cliffhanger for the midseason break. The Governor, realizing Merle lied about killing Michonne, blames him for the “terrorist attack” on Woodbury. Whether he truly believes he was a part of it or just needed someone to place the blame on isn’t entirely clear but he’s caught Daryl and decides they’re both going to die. Will the Dixon boys team up to kick ass? Will Andrea finally realize The Governor is a bad guy?  Oh, the episode is over.

All in all, I was underwhelmed with this episode, especially considering it’s the last we’ll see for a while. It was interesting to see Carl really imitating his father and I’m looking forward to seeing how that will develop over the next half of the season. Interesting to see Michonne almost create The Governor we know from the comics (although he was partway there). But not as much happened in this episode as I was expecting it to. I thought at least Rick would come face to face with The Governor. The first half of Season 3 is definitely an improvement over last season but has left me feeling just as frustrated in parts. Michonne and her antics have definitely made up for it though.

Let us know what you thought of the new episode in the comments and see you in February when The Walking Dead returns? Unless you watch the marathon they’re running New Year’s Eve.