It’s okay. I used to be one of you. I haven’t read the comics, and I don’t watch the TV series, so when I first heard about Telltale Games releasing an episodic point-and-click tie-in, I didn’t give it much thought. I probably thought, “meh, zombies,” and went on to other things. This was a mistake. Listen, I get it. If you’re not familiar with the comics or the show, or if you’re feeling like zombie games are past their prime, I understand why this one hasn’t piqued your interest yet. So let me start with this:

The Walking Dead is quite possibly the best game of the year.

As badly as I want to tell you all the little things that make this game so good, I can’t. Even knowing the basic premise of some of the tasks you’ll be handed would ruin the impact. There have been games in the past that have handed me difficult decisions, games I have paused for extended lengths of time while I wrestled with my own sense of morality. The Walking Dead is not the first time that a game has left me buried under an avalanche of emotions. But if you want to talk harrowing ethical choices, this game just set a new bar. I imagine that many of you have discussed zombie apocalypse scenarios with your friends. I imagine you know exactly what your gameplan would be, and that you’ve decided ahead of time what hard calls you’d be ready to make.

Don’t be so sure.

This is not my favorite story of all time. There are universes I have enjoyed more, heroes who have resonated with me more deeply. But in terms of delivering a solid story from beginning to end, I struggle to think of any game that has managed such consistent excellence. It starts with a bang, keeps things at a fever pitch all the way through, and wraps it up with an ending that will leave you speechless (I have nothing but admiration for those who waited from April until the end of November to play the final episode — how you kept up such stamina is beyond me).

You play as Lee Everett, a college professor headed to prison for a crime of passion. He does not deny his guilt, but from the opening moments, you can feel his regret. And then the dead start walking, and you start to wonder if prison might have been a better option. Regardless of whether you play Lee as a forgiving peacemaker or a guarded pragmatist, his journey is one of punishment and redemption (or the other way around, depending on your point of view). He is an engaging protagonist, and a memorable one. But the story doesn’t belong solely to Lee. It belongs just as much, if not more so, to Clementine. 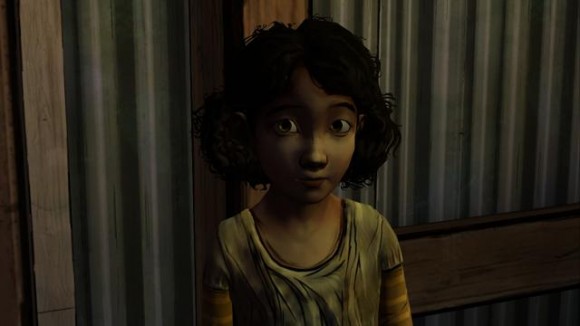 Clementine is, without a doubt, one of the best-written children I’ve seen in any medium. Kids are too often made to be unrealistic fonts of wisdom, little sages running around dropping sticky-fingered truth bombs on clueless adults. Not so with Clementine. She is the perfect blend of charisma, intelligence, and naiveté. She’s strong, and smart, but she’s also eight years old. She asks random questions. She does foolish things. She gets pouty with Lee when he tells her to stay behind with the others, even though she’s seen the horrors that are out there. There’s a touching moment early on when Lee is fighting off a zombie and Clementine walks up to him, clutching a hammer. She doesn’t jump into the fight. She just stands there. She knows she should do something. She knows that Lee could die. But she’s a scared little grade schooler who doesn’t know what to do. In that moment, I believed her, and that feeling never broke. The dynamic between her and Lee is beautiful, and by the second episode, I had only one motivation when making decisions. I was doing what was best for Clementine. Her well-being was everything to me.

I really think you should play this game.

To experienced gamers and those who aren’t fond of adventure games — I get it. The popularity of adventure games has faded, and you may have lost your taste for the slower-paced genres of years gone by. Offered alongside high-octane shooters and action games, point-and-clicks seem downright vanilla. Despite the simple gameplay, The Walking Dead never bored me. There are plenty of zombies to bash and smash, and even when tasks were limited to solving easy puzzles or choosing dialogue, the dramatic tension is kept so tight that I was loathe to take my hands off the keyboard. This is a game that will keep you up at night, that will invade your thoughts when you’re not playing. Even if adventure games aren’t your usual cup of tea, this one’s well worth giving a chance.

To casual gamers and anyone who has never before picked up a game, you will be able to play this. Anyone could play this. Move and click, that’s it. You don’t have to worry about character statistics or combat strategy or screwing up in front of other players, or any of the things that scare people off of the bigger stuff. The gameplay is intuitive enough for you to have it down in no time, and it’s centered on story and problem-solving, not combat. You will have to fight from time to time, but it doesn’t take much skill, and you’ll catch on fast. In fact, if you have yet to branch out into more immersive games, this might be a solid place to start. An intense, sobering gut-punch of a place, but a good one nonetheless.

To those for whom gender portrayals are a consideration, here’s the marvelous thing: the women in this game are just people, and a wide variety of people at that. Brave, weak, kind, cruel, and every gray area in between. It’s not uncommon for female characters in games to feel like an afterthought or a token addition, but that’s not the case here. All of the characters were crafted with equal amounts of skill and respect. I could sympathize with everybody in Lee’s group, even the ones I didn’t like. And did I mention Clementine, the little girl who really felt like a little girl? Who made me remember what it was like to be a little girl? Yeah, that.

To those who don’t like horror, I speak to you now as someone who is embarrassingly squeamish and who can’t even watch trailers for scary movies. I won’t lie to you, this game is unsettling. Gore is to be expected, and some of the plotlines will make your skin crawl. But The Walking Dead triumphs in that it uses blood and fear not as cheap thrills, but as set dressing. Though the narrative is tense, it is designed to convey a sense of danger, not terror. You will leave feeling shell-shocked, but you’ll be able to sleep with the lights off. If I can handle this game, you can.

On the other hand, if you represent the zombie enthusiasts among us, you’re going to love this. And though you don’t need any knowledge of the comics or TV series to follow the story, I am told that there are a few characters and locations that will be of note to fans. Bonus.

The Walking Dead is available on Xbox, PlayStation, PC, Mac, and iOS. It’s $24.99. It’ll probably go on sale closer to the holidays. Go play it. But don’t do it for me. We’re not acquainted, so why would you? And don’t do it for yourself, either, because you’re going to need a hug and a box of Kleenex when it’s all said and done.

Do it for Clementine.