The Walking Dead Recap: When the Dead Come Chomping | The Mary Sue

The Walking Dead Recap: When the Dead Come Chomping 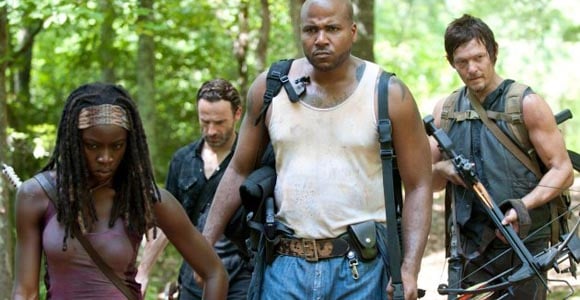 I was frustrated by the behavior of several characters on last week’s The Walking Dead and while some of them are still acting odd, this week pulled out several powerful scenes. Just one more episode until the mid-season finale!

We start pretty much where we left off last week. Michonne is at the gates of the prison (with baby formula!) surrounded by walkers. And Rick just stares at her. It’s clear she’s human but neither one of them says a word. It’s actually Carl who gets things moving in order to get her inside the fence. But instead of luring the walkers to another part of the border first, like they usually do, they let her fight a few walkers and then pass out. Look, I understand these people have been through a lot but there comes a point where your xenophobia is just unhelpful to the human race.

In the prison, Michonne acts pretty terrible too. Sure, Rick was about to leave you to the walkers and you did just get out of a really bad situation, but they did save you and now you’re going to go into your quiet act again? It’s no wonder they take away your sword and lock you up. I understand the need for things to unfold slowly but a little quicker exposition here of where she was, why she ran, and who exactly took Glenn and Maggie would have been great.

Oh, and surprise everyone else in our group, Carol is alive! Yah! But she finds out Lori is dead. Boo!

Daryl volunteers to go find Glenn and Maggie, as do Beth and the two prisoners, but they leave Beth and the older guy behind and Rick and Michonne go along for the ride. Carl names his baby sister Judith, after one of his old teachers, and Rick basically puts him in charge. I don’t even.

Weird things are happening in Woodbury. The Governor asks Andrea to help creepy scientist Milton. Turns out, they’ve got a dying old man to volunteer for an experiment to test whether or not the walkers minds are in any way intact after they change. It seems like an interesting idea but Milton’s naivety when it comes to the change cause Andrea to abort the whole thing with a knife to the newly-born walker’s head. Milton goes to throw up  and Andrea goes in search of more Governor sex or something.

Meanwhile, Merle has Glenn and Maggie tied up within screaming distance of each other and goes to work on Glenn first.

And then Glenn becomes a superhero. In my eyes, anyway.

We already knew Glenn had some skills but after being beat to hell by Merle, a walker is unleashed on him and even though his arms were bound with duct tape, he breaks the chair he was in and stabs it in the head with part of the wood. I’m not doing this scene justice. Glenn used what was available to him to survive and it was freaking awesome.

What wasn’t awesome was what was about to take place next door. The Governor decided he would interrogate Maggie in order to find out where their group was. It was tense from the moment he walked in the door. Was he going to pull his sweet talk routine on her or were we going to see his true nature come out? This scene was rough to watch. [Trigger warning.] The Governor untied Maggie, only to force her to strip from the waist up. She stood there shaking as he stood up, took off his belt holster, walked around behind her, and slammed her down on the table. She defiantly tells him to get on with whatever he’s going to do, she won’t talk, but he does not rape her. It’s seems a cop out on behalf of the show (similar scenes from the comic book are brutal) but one I’m particularly glad of because I did not want to witness that act. [Trigger warning end.]

The Governor has a different tactic in mind, he brings Maggie to Glenn (in the state he left her) and points a gun at both of them until Maggie finally caves and gives up the prison location. The performances by Steven Yeun and Lauren Cohen were remarkable here, even without many words.

Of course this is bad news for our survivors, many who are currently on the road to Woodbury, which is a rocky one. The group gets swarmed by walkers and take refuge in a borded up cabin. Inside, there’s a dead dog and a human being! Turns out, he’s mentally unstable and, the situation being what it was, Michonne stabs him and the rest throw him outside as bait for the others to survive.

They eventually make it to the gates of Woodbury but The Governor has sent a group out to inspect the prison so there’s no telling what will happen next week. My guess is lots of deaths, lots of hostages, and perhaps the arrival of a new cast member? All in all, a strong episode with several strong performances and I am frightened to death of next week.