The Walking Dead Recap: Hounded By Idiots | The Mary Sue 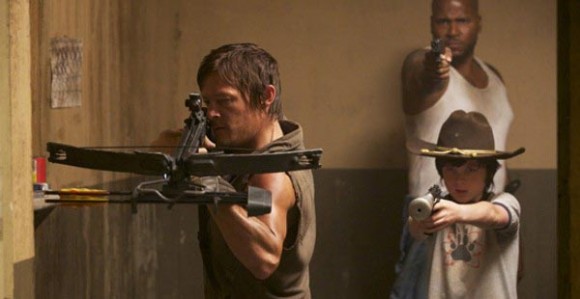 For the most part, AMC’s The Walking Dead has show a vast improvement over last season. What hasn’t shown improvement? The characters’ mental acuity.

I legitimately thought my DVR had cut off the first few minutes of the episode last night. We stepped into a scene with Merle and three thugs, for lack of a better word, from Woodbury, hunting Michonne. Why were they hunting Michonne? Merle sort of explains the Governor sent them out but we never see that particular conversation so we don’t know why he would have sent them out in search of a character who was trying to get as far away from them as possible. We’re also introduced to a character named Gargulio who appears to be reluctant at their task and who could perhaps play a bigger role in the coming episodes.

That whole part of the episode was just so poorly planned and executed. Thank goodness they gave us some gore and action to make up for it.

Back at the prison, everyone is still ignoring the fact no one found Carol’s body. No one’s talking about her. They’re basically twiddling their thumbs. Daryl, Carl, and Oscar attempt another sweep of the prison for walkers and don’t find much action. Daryl and Carl get to share stories about their dead mother’s though, so that’s something. The one walker they do find has Carol’s knife in his throat. Carol! OH HEY, EVERYONE, REMEMBER HER? Seriously, we went almost the entire episode before this happened and Daryl has a brief moment being angry because he thinks Carol is a weak zombie (dude, she would kick your ass) before he finds her out of it, but alive, in a closet. I guess we should be happy this didn’t drag out for five episodes.

In Woodbury, Andrea insists she wants to be helpful and suggests working on the wall to get back into zombie-killing practice. She’s set up with a young woman who has a really expensive bow and arrow set but can’t shoot worth her life. They too bond over lost family members, specifically ones they had to kill, before Andrea jumps the barricade to take out one walker the other woman was just wasting arrows on. And that’s a big no-no with the Governor so she’s off killing detail but can still sleep with him if she wants. Which she does in what wound up being a really uncomfortable courtship to watch. Andrea has officially lost all personality/character and is now just shell used to move the story along.

Everyone else is as useless as you can get at this point. I expect any of our main characters to die at any moment and not care a lick about it. Things keep happening that should make an impact but don’t because there’s no substance to any of them right now. Last week we saw Rick take a trip to Crazy Town and this week he remained there by talking to dead people on an old phone in the prison. Hershel seemed to play along because he wanted to let Rick deal with his grief but after a few phone calls he was all set to finally hold his new baby daughter.

While the Merle/Michonne showdown was pretty great to watch, it was the reunion between him and Glenn that was the highlight of this episode for me. Poor Glenn, he’s been through a lot. Too bad he’s not remotely done. Part of me was hoping Michonne would pop out to save the day but really, I just wanted her to get to the prison, which she eventually did. With bonus baby formula, because she’s nice like that.

Ok, Walking Dead, you started off great this season but you’ve been dragging your heels a bit lately. Let’s ramp it up again, shall we? And give our survivors some personality and motivation again so we actually care when they bite the big one.