No, Let’s Talk About Talking About Video Game Violence 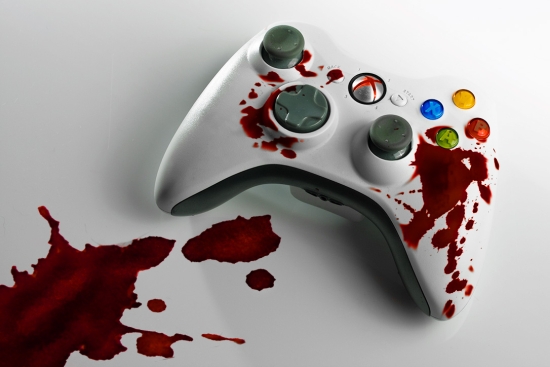 It was inevitable that people would somehow assign blame to video games for the horrific shooting in Connecticut last week. When the news started coming in, I looked at a fellow editor and said, “Ten minutes until someone points the finger at video games.” Bad taste, perhaps, but the cycle is almost like a mathematical equation: Devastating shooting plus media equals violent video games are to blame. It certainly didn’t take long, either.

Just as the blame was predictable, so too were the defensive responses. As this article from BuzzFeed points out, “the knee-jerk defensiveness of gamers and games writers has become dogma.” The writer, John Herman, suggests that it’s time to talk about video game violence. On the contrary, it’s been long past time to talk about violence in video games, and it’s been covered extensively. One could say that the talk has already been had.

No, let’s talk about talking about video game violence.

At worst, video game studies — especially those dealing with crime and violence — could be deemed “controversial.” In reality, there’s probably more out there to support the idea that video games have had a profoundly positive effect. Clearly, despite all of these findings, to the medium’s detractors, video games are to blame for killing sprees.

The numbers don’t appear to agree, though. It’s obviously a complicated issue, and the United States is an outlier, but the following graph from The Washington Post puts the number of gun-related murders per 100,000 on one axis and video game spending per capita on the other for the ten largest video game markets. Check it out: 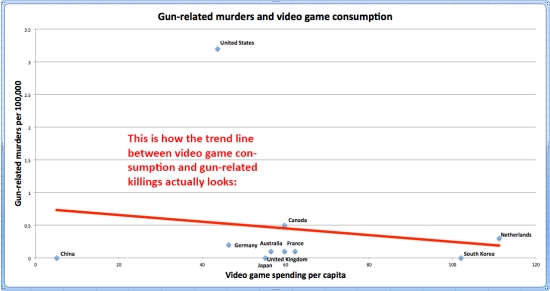 Notice a trend? South Korea and the Netherlands, both of which spend significantly more than the United States on video games, have far fewer gun-related murders per 100,000 people. It obviously doesn’t take into account a variety of other factors, but neither do most claims made against video games.

Henry Jenkins, currently a professor at the University of Southern California, sums things up nicely in an article titled “Reality Bytes: Eight Myths About Video Games Debunked” where he explores the myth that youth violence has escalated thanks to video games:

It’s true that young offenders who have committed school shootings in America have also been game players. But young people in general are more likely to be gamers — 90 percent of boys and 40 percent of girls play. The overwhelming majority of kids who play do NOT commit antisocial acts. According to a 2001 U.S. Surgeon General’s report, the strongest risk factors for school shootings centered on mental stability and the quality of home life, not media exposure. The moral panic over violent video games is doubly harmful. It has led adult authorities to be more suspicious and hostile to many kids who already feel cut off from the system. It also misdirects energy away from eliminating the actual causes of youth violence and allows problems to continue to fester.

The reason why so many automatically drop into defensive stances when this comes up is because the vast majority have seen this fight play out before. If not with video games, then with the movie Taxi Driver or the book The Catcher in the Rye. It’s easy to place blame on the arts, especially if they include some modicum of violence, than on the actions of people or the policies surrounding, say, the acquisition of guns.

Apart from being tired of trumpeting the virtues of gaming, defenders have a tough time finding reasonable debates to engage in. It’s particularly groan-inducing to see stuff like the following making the rounds:

Video game violence & glorification must be stopped—it is creating monsters!

Of course, Donald Trump is merely attempting to remain relevant in a world that would probably rather forget he existed, but there are still some folks that take the man seriously. Not many, but some. It’s positively exhausting to try and defend against the same accusations over and over when the other side won’t see reason, and people like Jack Thompson, for example, take it to an entirely different level.

Essentially, talking about violence in video games is an almost pointless pursuit at this point. We’ve already been there, done that. The real problem is nobody seems to be listening.