The Hutts Slither Their Way Into Star Wars: The Old Republic’s First Expansion 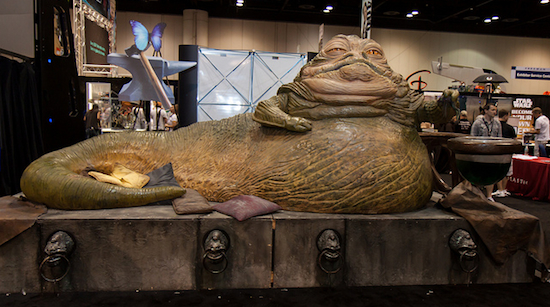 It looks like the conflict between the Galactic Republic and the Sith insurrection just got a whole lot more complicated now that a third party has been thrown into the fray — and, boy, do these guys know how to party. This coming spring, Star Wars: The Old Republic will be getting its first expansion entitled Rise of the Hutt Cartel, centered around the hedonistic Hutts staking their claim in the galaxy and keeping everybody under their grimy, pudgy thumb. The expansion promises plenty of new features to heighten your gaming experience, as well as present players with an interesting, and admittedly enticing, opportunity.

Rise of the Hutt Cartel will feature a fully-voiced storyline — rife with the species’ trademark guttural “ho ho ho” laughter to be sure — that will take players to Makeb, a planet under the dominion of the Hutts, their battle stations, and other devastating bric-a-brac. There, the Galactic Republic and Sith will be at odds over a major secret that can have major implications on the course of events in the galaxy. No word, obviously, as to what this secret is, but it’s no doubt a tremendous evil…  possibly the finalized script to Star Wars Episode VII.

Aside from a new story, the expansion will also raise the level cap to 55 and offer additional abilities, skill points, and gear to really tear into the Hutts, or swear alleigance to them, which is actually an available option. It may go against our moral fiber, but if signing up with the Hutts entails having your own harem of exotic alien dancers and a Kowakian monkey-lizard-Muppet-thing for a pet, then, hey, count us in! They’re sleazy sacks of filth, yes, but they really do know how to live it up.

(via Eurogamer, image via chaines106)