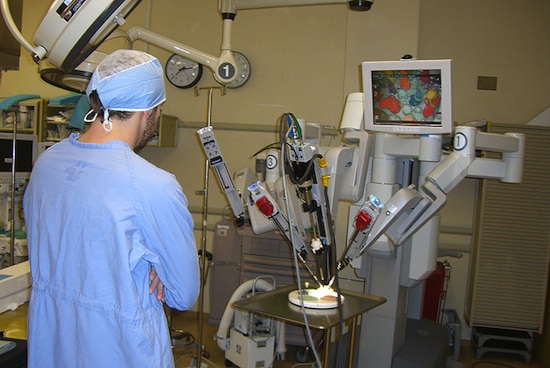 Robotic surgical tools are giving doctors more insight and precision into the surgeries they perform than ever before, but with the technology still in its infancy, many surgeons are still struggling to master the skills they need to make the most of available equipment. It turns out that surgeons using robots could take a pointer or two from video gamers, who, in a recent study, proved as good or better than their MD bearing counterparts in tests of the skills involved in robot-assisted surgery.

Presented this week at the American Gynecologic Laparoscopists’ 41st Annual Global Congress on Minimally Invasive Gynecology, the results showed that two sets of gamers — high school sophomores who played at least two hours a day, and college students who played about four hours daily — met or exceeded surgeon’s skills in controlling the robots. In a series of experiments that tested the precision of hand-eye coordination, the ability to put just the right amount of pressure on a point, and the steadiness with which they fastened sutures and stitches using the robotic arms, the untrained gamers again and again showed doctors how it was done.

Researchers blame the fact that most doctors haven’t been properly trained on this brand-new technology yet for the skill gap, and that’s pretty valid — after all, robot-assisted surgery has only hit the mainstream in the past couple of years. While it has many benefits, such as being less invasive and thus often quicker to heal than traditional surgeries, most doctors are still unfamiliar with the techniques — and the unique skill sets they demand. Apparently, those doctors didn’t spend way too much time in front of their XBOX during college, either. One assumes they were too busy learning about anatomy and such, so that’s forgivable, we guess.

Anyone else think it’s time for a training program run by gamers, for doctors? It could benefit everyone, and as a plus, could also prove that all those hours spent playing Halo really did have a positive impact on your life. Take that, moms, teachers, and guidance counselors everywhere!