Last Night’s Doctor Who Regeneration Explained, Plus Some Behind the Scenes Clips to Make You Cry 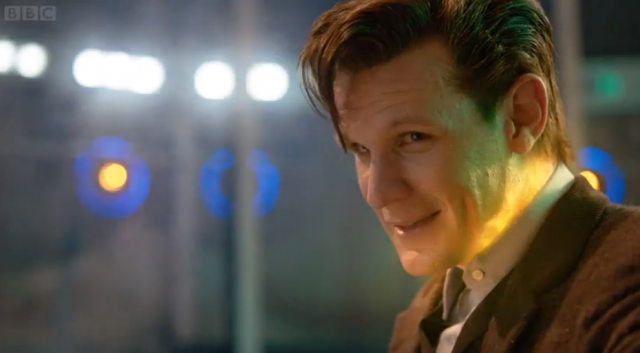 In case you missed last night’s Doctor Who Christmas special, it was full of Moffat’s usual fare — ridiculously over-complicated premises with surprising moments of emotional resonance. But once you strip away the clever lines and the special effects, what actually happened to cause the Doctor to regenerate? We parse it out in this spoiler-y discussion.

Seriously, though, massive spoilers. This is only for people who’ve actually watched the episode.

As the Doctor explains in the episode, once again it all boils down to the Time Lords of Gallifrey. Though he did manage to save them all in the 50th anniversary special, he can’t actually afford to bring them back to our universe yet, because doing so would basically start the Time War up again (and as confusing as this episode was, we definitely appreciated that bringing all the Time Lord back is now considered a bad thing again, since we were worried about that). Of course, the Time Lords still want back in anyway, and are using a leftover crack in the universe from season 5 to ask the question from season 6 — “Doctor who?” — in the hopes that they can get a lock on the Doctor’s signal and pull themselves into our world. So the Doctor can’t leave the innocent people living on Trenzalore because the rest of the universe will blow it up to stop the Time Lords getting out, but he also can’t actually let the Time Lords out himself because then the rest of the universe will just keep trying to blow them up. And on top of that, the Doctor believes that his body lies at Trenzalore, so his permadeath is imminent in some way.

Adding an extra kink into all of this is the Doctor believes he’s at the end of his life anyway, regardless of his foreknowledge of Trenzalore. Our initial theory that the Galifrey-dictated 12-body regeneration limit was culturally based and that the War Doctor’s insertion into the cycle wouldn’t actually make a difference, but it turns out that we were wrong — the Doctor is currently inhabiting his twelfth body, so he thinks that he’s completely out of regenerations. Of course, we were right in thinking that the limit was going to get casually tossed aside, but it was fascinating to see him and Clara actually engaging in a conversation that a billion nerds all over the world have been arguing over for years now.

So what kills the Doctor? Old age, it would seem. He spends at least 300 years on Trenzalore during the second act of the episode and comes out of it looking noticeably older — which, by the way, is confusing, because two seasons ago he went from being 900-ish to 1200-ish without looking any differently (unless, of course, the Doctor lied). Then after another unspecified number of years he gets even more decrepit and ventures out into the open to meet that death. Whether he intended for the Daleks to finish him off or whether he thought he was just going to collapse up there on that tower, it’s hard to say. But now we know that while spending 600+ years in one body is, in fact, possible for your average Gallifreyan, it’s certainly not recommended.

On a side note, this isn’t the first time he’s died of old age, either — the first doctor did, too, remarking that his body was “wearing a bit thin” just before turning into the second doctor. So it’s kind of fitting that Very Old Eleven sort of resembles him a little bit, at least around the hairline.

As we all expected, though, it was all a wash anyway because that’s about when the Time Lords decide to throw an unspecified amount of regeneration energy at the Doctor because of reasons (after Clara tells them to, naturally). It’s too much for him to handle at once and explodes out of him Beauty and the Beast style to take down his enemies in a explosive blaze of fiery Dalek-death, which then resets him to his eleventh body’s original age before changing into a completely new one.

This chain of events, of course, still leaves a lot of questions unanswered.

Firstly, why didn’t the Daleks just shoot him basically any chance they got? Especially at the end there, when he was waving his cane around and telling them he was dying? Secondly, why didn’t the Doctor remember that there were 13 of him working together to save Gallifrey? All the other Time Lords noticed it, so it should stand to reason that the Doctor would have counted more than 12 TARDISes that day. Unless he didn’t remember it because of the weird timey-wimey ending that allowed all the Doctors to go home to their timelines with their “Last of the Time Lords” angst still intact.

Thirdly, weren’t the Gallifreyans completely frozen outside of time? How are they able to communicate with the Doctor in the first place, and if they were able to hear all of what was going on through that crack for the past few centuries, why couldn’t they have offered their own solutions? It’s not that we don’t believe they’d stop trying to come back if they knew that it would start a terrible war, because as we established in “The End of Time,” Time Lords are kinda dicks who don’t really care about what havoc they might wreak on the universe. Even so, why did it take Clara interceding for them to all go, “Oh, hey, maybe we should help out?”

Anyway. whatever you think about how wacky and convoluted this episode might have been, it was still completely worth watching for Matt Smith’s final speech in the TARDIS at the end, complete with a solid minute of Capaldi!doctor. The timing of his regeneration still managed to throw me completely off guard, so props to Moffat where they’re due on that one.

For me, personally, everything about this regeneration was absolutely perfect. The sudden power balance between the Clara and the Doctor, who went from a young confident man promising that he wouldn’t forget “a line of this” to an older gentleman who suddenly doesn’t even know how to fly the TARDIS, gave me a lot of hope that having a new Doctor to play with might inspire Moffat to calm down a bit with the theatrics. For me, the Doctor is at his most interesting when he’s not the end-all-be-all master of the universe, so a more hapless “Hey Clara what does this button do” type of personality would be a very fun, refreshing change. Not that Eleven wasn’t incompetent in his own wonderful ways, of course, but his was more of a social ineptness than anything else.

If you’re not ready to let go of Matt Smith yet, then we’ve found you some more footage of him and everyone else in “Time Of The Doctor” doing their thing one last time. Try not to cry all over your keyboards when you get to their final table read. Trust us, it makes typing difficltsgsha.

(videos via Coming Soon, GIF via doctordonna-s on Tumblr)