Sigourney Weaver on the Legacy of Ellen Ripley, Women in Games, and Her Return in Alien: Isolation 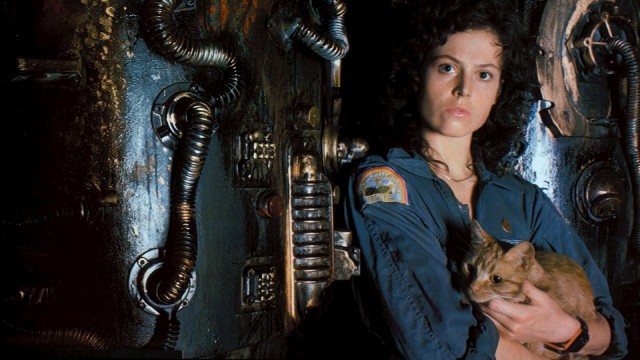 A magical thing happened a few months ago. I spoke with Sigourney Weaver on the phone. I’m not fully recovered. Find out what the actress, soon to be heard reprising her Ellen Ripley role in the video game Alien: Isolation, had to say about women in film, women in games, her sci-fi legacy, and Ripley’s daughter.

We felt having Ripley’s daughter be the protagonist for Alien: Isolation (check out our advanced review here!) was an inspired choice. Not only does it bring back the original feel of Ridley Scott’s Alien, it expands on the character in a way not typically seen in Hollywood – a daughter as a legacy character.

“I get approached to do other kinds of games, sometimes to do with Alien, and this is the first one that seemed to me to be very ambitious in a new direction, using the details of Jim Cameron’s script – you know, the fact that Ripley never was able to be reunited with her daughter,” Weaver told reporters on a conference call. “This was the first time it makes sense to me because, frankly, these movies are hard acts to follow. That’s the biggest challenge of anything that’s good enough to spawn a sequel is that it’s setting a high bar. ”

Weaver added that it was “imaginative” and “touching” to see her fictional daughter go into space and the unexpected connection between the two. The Mary Sue asked her about Ellen Ripley’s story being wrapped up in the concept (in the films) and literal story of (in the game) motherhood and how it related to strong female characters:

I think of women as so strong, and I am fortunate to play lots of different kinds of women, but… women to me in general are sort of the glue that holds the world together. And it is women who are mothers, particularly — who are on the front lines of many things in life – they hold the family together, they change things in their communities, they run businesses. They really have to do many, many things and I think over the centuries have developed qualities of character: strength, and endurance and fortitude and patience. And kind of “let’s get this done” general attitude that I think is really refreshing, and we don’t get to see it enough in life or in movies. I feel it’s a logical extension that – it does happen every now and then that you see a mother become a heroine. You know, like off the top of my head  the old movie now but JoBeth Williams in Poltergeist – It’s not unheard of for mothers to save the day. As they do in real life all the time.

As one of the most influential female characters in science fiction, we also had to ask Weaver how she felt about her legacy.

“I’m sort of stunned that it is an influential character but I’m delighted, and I can kind of understand it because I actually based the character on a woman who inspires me very much who’s an environmentalist who’s very… she’s very much a person who doesn’t get bogged down in things that could go wrong. I’m glad that I picked the right person,” she told The Mary Sue. “I think she is a terrific character and I have to give credit to the four men and the many men and women behind these movies who wrote them and acted in them that these four films — I was very fortunate to be working with people who could tell a story that could still resonate many years later that had enough universal themes in it, that was still relevant to people.” 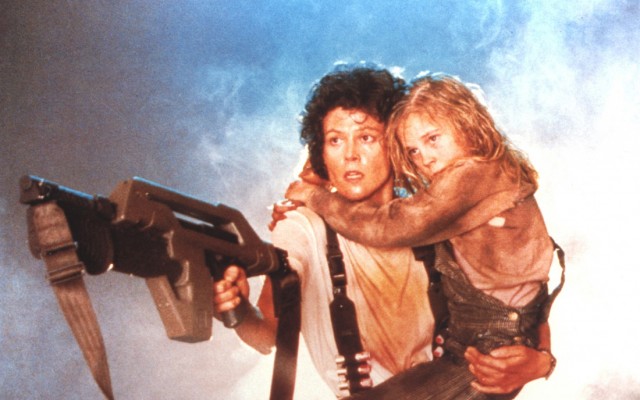 She continued, “As I think a lot of science fiction is, because it remains in the future, so we’re still very interested in what happens. I think I was really lucky, and I hope someday to complete the Alien saga. I meet so many people for whom these movies mean a lot and it would be great to let the story be finished properly instead of kind of – which is my fault really. I didn’t want to do 5 with 4 because I wanted some distance. But maybe someday we’ll get to do the final installment and Ripley will find some peace. I hope so.”

We’re keeping our fingers crossed on that one but in the meantime, if you need your Ripley fix, we suggest trying Alien: Isolation. The game focuses on Amanda Ripley, searching for an answer to what happened to her mother and running into the same menace she faced. For her part, Weaver had glowing things to say about this new chapter in the franchise.

I think other people have tried to funnel Alien into games. I think this one – what’s interesting about this game is that it’s – it has its own original story and it’s very faithful to the first film while going in a whole new direction for people. And in, if I may say, in an emotional direction. I think video games themselves are expanding to please a lot of different appetites – a lot of different kinds of gamers. Maybe gamers who are more interested in story than, kind of, target practice. So I’m kind of delighted that this happened now, because I think that gaming is so sophisticated, that it can give you such an immersive experience, this is the perfect time for this game created from something that was made 35 years ago – it’s a coming together of a lot of elements in a really exciting way. I certainly wouldn’t have anticipated it then because the business didn’t morph in the same way. You know – there weren’t these people. It was that long ago, in the middle ages,  – there were no video games that I know of. There might have been pinball and you know, those games. …Yeah, there was pinball! Some country – maybe Britain – I saw an Alien pinball game. That sort of – that would have been the biggest kind of success when we made the film, that we would turn into a popular pinball game. But I think this is a very creative game and I think it’s – to me it’s interesting story-wise and character-wise.

Weaver told reporters Ripley is part of her DNA and she was surprised how easily her voice came out when working on the video game. 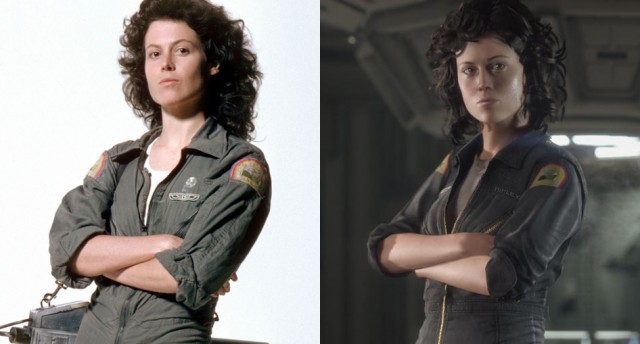 “It was actually a little hair-raising for me to walk through the corridors of Alien that I hadn’t walked through in 35 years and to see Ridley Scott’s little bird that goes back and forth and to see some of those weird little touches that the creators had put in the environment, which are fantastic. All the detail is really fantastic. There’s so much to take in in the game and I bet it will be a really fascinating experience to kind of jump into this game,” she said. “What the game does is it puts the spectator, the fan, in the driver’s seat, and you actually have your own experience that you have to live or die based on what your decisions are. What you hear. What you see. What door you’re reaching for. Your judgement. Your decision. I think it’s a very rich, complex kind of world and situation.”

The actress also told us it was very exciting to enter the world of video games with Alien: Isolation and what it means for women in games. She said, “I have heard that it’s very male-dominated and you know, I simply have seen a lot of women in strong roles in the movies and I think if more games are made with a bigger spectrum that characters will get more complex, and I think that certainly will mean there will be more women characters. Men and women. I think the games will get more layered and, you know, creative. So I think that’s really exciting.”

And then she got us in the feels.

“I’m sort of both thrilled about being, having played, a kind of iconic character, but I wish it weren’t such a lonely feeling. Because I do feel that women are so incredible. It seems to be hard for Hollywood to come up with good just sort of straightaway – straight, true women characters that they don’t try to make, you know, ‘sympathetic’ or something. That’s always the kiss of death,” she said. “When a person will try to write you to make people feel something for you instead of just letting you get on with it, it can be a kiss of death. It takes talented people in all these different fields to come up with good men and women characters. There’s so many great examples in the world of powerful, interesting personalities that I hope it’s more – perhaps if more women choose to enter this field of creating games, that will happen. I just think that, as someone who doesn’t know that much about games but thinks they’re great, I just feel like there should be games for everybody, for everybody’s taste. I am sure it will happen.”