When do we get to shout "GET AWAY FROM HER"? 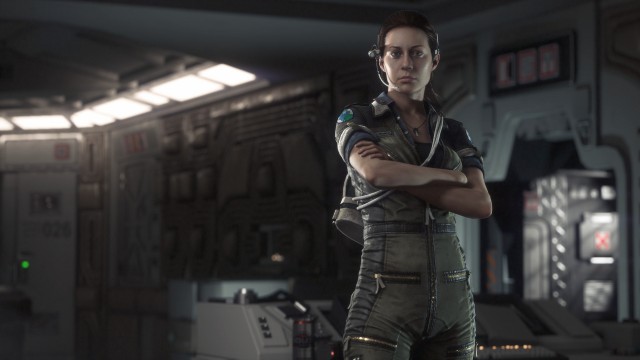 The survival horror game Alien:Isolation and its Sigourney Weaver-starring preorder DLC are due out in October, and no one at TMS is more excited than our Editor-in-Chief Jill Pantozzi. She got the chance to  hang out with the Creative Assembly team at their booth in San Diego Comic-Con the other day, and spoke to creative lead Al Hope about the development process.

We catch up with Jill and Al Hope just as a nearby game demo begins, and Hope explains to Jill what’s going on:

Al Hope: So this is really trying to tell the player that this is a game about choosing. This is about trying to avoid being seen. So we give them a really brief introduction to the motion tracker and anyone who is kind of  familiar with the film should kind of see the similarity there.

The Mary Sue: I will tell you: I am so scared to play this game, because the movie scares me and whenever I’m in a game where it’s very intense…

Al: Yeah, I feel the same. So what we’re showing here in the egg is you get to play the newly announced challenged/timed mode. So it’s really condensed. It’s really intense experience but it’s kind of stripped back experience. It’s just you. In the space, in a contained space with the alien and then you got a simple objective of trying to survive the maze, but actually that proves to be quite a challenge. So she’s [the player they’re watching] managed to not see the flamethrower so she’s gonna have a really hard time… although she has the motion tracker there and that really is your main weapon.

TMS: That was fast!

Al: Yeah. It’s not completely black and white, but if the alien does see you and you don’t move out of the line of sight, then it will come for you… We are, to be fair, asking a great deal of these players, because they’re really jumping into the deep end with no experience of trying to survive against this thing. You should never turn the light on. Because you know, our alien is kind of dynamic and reactive creature that isn’t running on any parts or type of patterns ,so it’s just using its senses of sight and sound to try and track the player down. So switching every switch  is cool because it’ll help you navigate through the world, [but] it of course acts as a huge beacon to the alien. And so part of the gameplay is situational awareness of the environment, to figure out what the next best thing is. Do you stay or do you go? Do you have any resources at hand to help change the odds? The alien’s being able to navigate through the world. It uses the vent system in the ceiling and in the walls.

TMS: So every time that we post about the game, the comment that we get the most is, “Oh god, not another Aliens: Colonial Marines,” which I did not play so I don’t know what the whole thing is about that. How long before people are ready to say “Ok. Let’s do another game we think people are ready for. We think it’s gonna be great”?

Al: I dunno. The thing for me is… one, we started making this game about four years ago— so way before Aliens: Colonial Marines came out — and from the start we were trying to do something different, whereas I think the majority of video games based in the Alien universe have really focused on the James Cameron experience; marines, assault rifles, lots of aliens. It’s about killing them. I really wanted to do something completely different. I really wanted to really love the first film and the sort of experience you get from that. You know, about strength. About just one being absolutely terrifying. It felt like there must be a really thrilling game there. What it’s like to try and survive against that creature? And so, if games usually go in [the other] direction, then we felt like we were going in the completely opposite direction. A game about survival. About you know kind of cat and mouse gameplay. It felt like there had to be an alternative game there that wasn’t about aliens just being at the end of your halls and floors, killing them. I think that to answer your question, it is an Alien game but it’s something completely different. For me, what the game is – for the first time it allows players to experience what it would be like to encounter Ridley Scott’s original alien. It’s massive and terrifying and give you the sense that it’s really intelligent, that it’s actually hunting you down. So, completely new experience.

TMS: What was the choice to obviously go with Ripley’s daughter and to create this whole new experience with this person?

Al: We really love the first film. Everything about it:  the unique alien, the giant creature, through to the low-fi, sci-fi scientist view of the world. It’s got a really unique aesthetic. And to capitalize on that, I really wanted to have a new story—it was never going to be a video game of the movie. Alien: Isolation takes place 15 years after the Nostromo goes missing, and someone has found the black box recorder of the Nostromo. So Amanada,who has been searching for answers about her mother’s disappearance, phones in to be part of this really small crew to go and simply retrieve it. Obviously things don’t work out as planned!

I guess to your question about Amanda… it just seemed like an amazing opportunity. We had this character in the universe that was introduced in Aliens  whose story had never been told and it felt like, “Oh my goodness. We want to put this story right next to Alien,  and we need to really have kind of an emotional connection to the first movie ,and we’ve got a character who could be pushed into the spotlight. It’s just perfect.” Ripley’s such a iconic and unique and pioneering character. It felt totally the right thing to do to choose her daughter, who is her own character in herself and isn’t a complete clone of her mother. 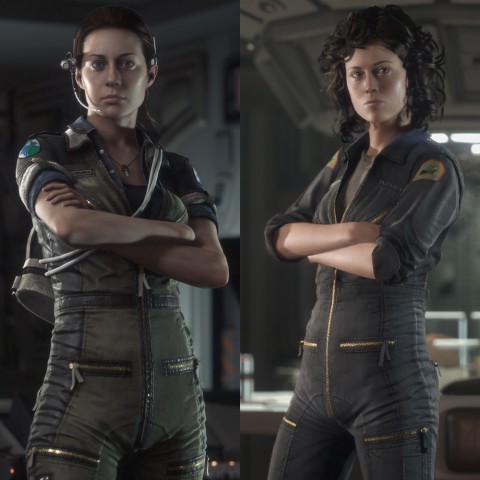 TMS: A lot of the Alien series has had connected to [Ripley] is sort of her motherhood thing. Whether it be an alien’s or even an alien resurrection, you know – a strained motherly thing with the alien. Is there time to get into that with Amanda considering that her mother’s not there with her? Is there time to develop that sort of aspect of it? Without giving away too much.

Al: So I think there’s a number of mysteries that take place in the story and I really don’t want to spoil anything! It’s a component of part of the experience.

TMS: That’s good! Obviously recently we’ve heard that Ripley and the original cast are getting to be back. How far along in the process did that decision come to play?

Al: Alien: Isolation came from a small enough number of people at  studio [who] really wanted to make this game. No one came to us and said ,“You need to make an Alien game.” We went to SEGA and said, “we think this is going to be really really cool.” It’s a real dream project and, of course, as soon as we started and started putting things like this together, putting the world together,  all of these ideas start flooding in. The fact that we were producing this world that looked so much like that first film […] It just felt like we just kept asking “what made the Nostromo? Or maybe we could get the original crew/cast to come back and somehow participate in it?” And then you got some people saying ,“This has to happen. How do we make it happen?”

And then it’s simply – the work we had done in creating the atmosphere and staying so true to the original. I think it really gave us a head start because we had to put all we’d done in front of  [the actors] and say, “Look. This is what we’re doing. This is a new thing. It really goes back to where you guys started.” And they seemed massively positive. And I think with Sigourney, that we had chosen her fictional daughter as our main character, I think that meant a lot to her as well. Yeah, an amazing, amazing occurrence.

TMS: I got to speak with her actually about this the other day and I mean, it was amazing because from my perspective as a fan and someone who was very young, obviously, when I first saw these films. She’s a sci-fi goddess to me and the fact that this wasn’t just a throwaway thing for her. Just a really important role for her too and she gets the importance of it in the genre itself and gets it that she is willing to do a game like this too. It was really interesting.

Al: That was the interesting thing. You know, working with her on the dialogue. I really got a sense that this character is really important to her. And the fact that we’d written lines – we had a script but then she would be saying “Let me try this. This might sound more like Ellen” and yes. We’ll go with that. That sounds exactly like something Ellen Ripley would say. That was just magical. That was the thing, as soon as she started delivering those lines, you’re kind of being transported back 35 years. She’s talking to the original crew and yeah, really incredible experience.

TMS: Are there any other [technical] details that you want to touch on?

Al: Oh no, I don’t want to touch on those. I think – one of the great things for me about coming to SDCC is this [fans reacting to game in background]. Is the fact that we might have produced a game that’s a little bit different. That’s not about killing. But you know, what an amazing reaction. We probably wouldn’t have got if we had just put the player there with a big gun and just got them to clear what’s ahead of them. I think that it proves there’s an audience out there who wants something like this and the fact that you can have people play and be killed in the game and come out with massive smiles on their faces. That they’ve been equally scared and thrilled at the same time. That’s just great.

Alien: Isolation is currently available for pre-order and will be released on Xbox One, PlayStation 4, Windows PC, Xbox 360, and PlayStation 3 on October 7th.