There’s Still a Need for Supergirl AND Agent Carter

There's Still a Need for Supergirl and Agent Carter 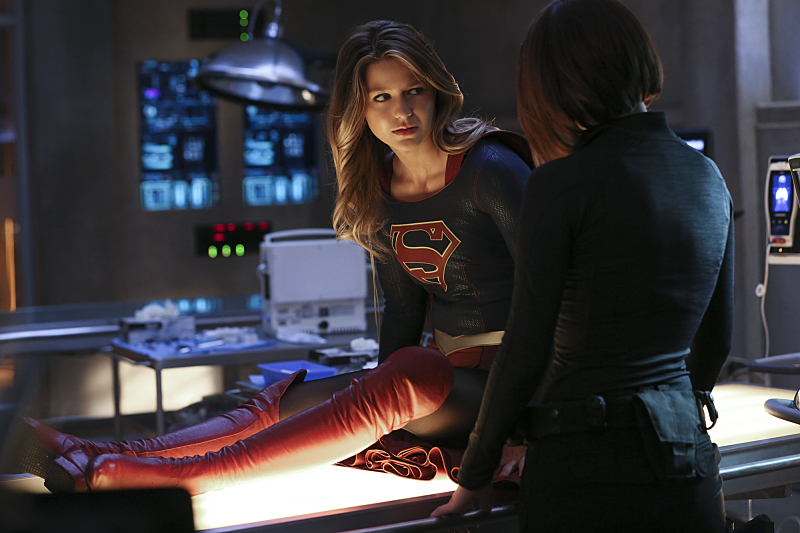 CBS president Leslie Moonves strongly implied at a Deutsche Bank Media, Internet & Telecom Conference last March that Supergirl would be renewed for a Season 2, saying “We have about five new shows on this year. Of those five, I believe all five of them will be renewed, and we own four of them.” Since then, though, the network has been disconcertingly mum on the fate of the National City hero, and a second season has yet to be officially announced, although the creative team already has exciting plans in place for what next season would look like.

Now, The Wrap reports that Moonves and Warner Bros. are “deep in talks” about what to do with the pioneering show. According to “sources close to the series,” Moonves wants to keep the series on CBS, but its $3 million-per-episode price tag might not be sustainable given the first season’s ratings. Although Supergirl‘s pilot pulled in fall’s biggest premiere audience, Nielsen ratings show that viewership dropped considerably over the season (Supergirl‘s premiere earned 13 million viewers, but its final two episodes had only around 6 million). Given that the series had one of the steepest license fees for a freshman series ever, that viewership decline is an understandable concern for the network.

CBS is due to announce its fall schedule at an upfront in two weeks, and as crunch time for deciding Supergirl‘s fate approaches, fans and some trades are speculating that the show could move to The CW. The CW is operated by the CBS Corporation and Warner Bros. Entertainment, and Moonves is responsible for programming on the network. Given the well-received crossover between CW’s The Flash and Supergirl this season, Supergirl might have a bit of a built-in audience on The CW, but The Wrap cautions that move “would be fraught for both producers and fans, as budget-conscious CW shows don’t tend to collect huge license fees for the studios. The upshot of a CW shift is that there would very likely be big budget cuts in the offing for Supergirl.”

Doubts over Supergirl‘s future come at the same time as many people are forecasting the cancellation of Agent Carter. Although Agent Carter has never been a ratings powerhouse, last season was particularly dismal as the show dealt with delays (thanks, Obama!), competitive time slots, and irregular scheduling. Now, Hayley Atwell’s new ABC drama Conviction is projected by The Hollywood Reporter to go to series, and Agent Carter showrunners Michele Fazekas and Tara Butters are set to exec produce an ABC pilot, The Death of Eva Sofia Valdez. Neither of those projects totally preclude Agent Carter getting a third season (Atwell could conceivably juggle the two shows), but it certainly doesn’t seem like a vote of confidence in Agent Carter‘s future that so many of its key players secured new opportunities.

Obviously Agent Carter and Supergirl are two very different series in terms of their tone, premise, price tag, and the networks’ initial vision for them (remember, Agent Carter was only ever intended as a limited series). I don’t want to imply that the two shows are necessarily comparable just because they each star a woman. I’m only bringing up Agent Carter because if either it or Supergirl doesn’t return for another season, that means our options to see awesome female comic characters leading their own series on conventional networks gets significantly reduced.

There are a lot of male-lead or ensemble superhero shows out there, but still so few female-lead comic show on TV that cancelling either Supergirl or Agent Carter would leave a huge dent in the viewing options for comic fans who want to watch a woman kick butt (or punch face, as is more often the case with Peggy).

Obviously comic fans will still have Jessica Jones on Netflix, and the animated Vixen series on CW’s streaming network, as well as a potential live-action Vixen series on the The CW. I’m optimistic that SyFy’s Wynona Earp will get a second season as well. But none of those shows, as awesome as they are/could be, would fill the void of Supergirl or Agent Carter. That’s not a knock on Jessica Jones, Vixen, or Wynona Earp; it’s a knock on the notion that female-led comic shows are interchangeable, or that the market for them is somehow already over-saturated.

I’m sympathetic to the difficult choice both CBS and ABC have to make, but it’s definitely depressing to consider what the TV landscape could look like next year with both or even one of these series gone. Hopefully we’ll reach a point in the foreseeable future with comics shows where the cancellation of one series won’t have such a significant impact on overall TV representation. Unfortunately, that won’t come until those series are a more accurate cross-section of what humanity actually looks like (which, considering Vixen’s appearance on Arrow in February was the first time a Black female superhero featured in a live-action medium since Storm, is still a long ways off).