We Don't Need Supergirl OR Jessica Jones. We Need Both. | The Mary Sue

We Don’t Need Supergirl OR Jessica Jones. We Need Both. 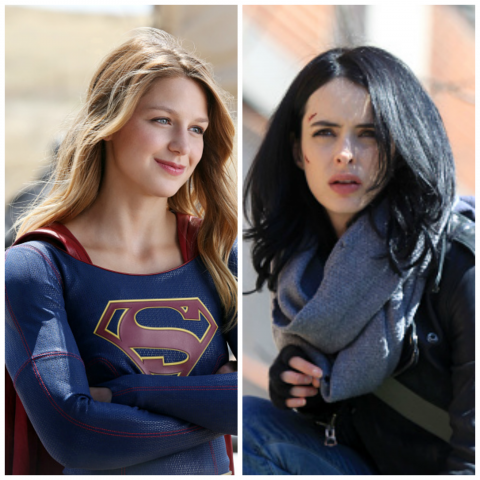 On Friday, Netflix launched its full, first season of the much-hyped Jessica Jones; so far, reactions have been mostly positive from critics and fans alike. And there’s a lot about the show to appreciate, from its unflinching depiction of characters who have overcome past trauma and assault to strong female friendships. Jessica Jones is responsible for many firsts in the Marvel Cinematic Universe, and that’s something we should absolutely keep talking about.

But Jessica Jones isn’t the first television series to feature a female superhero in the titular role; CBS’s Supergirl premiered last month to its own positive reviews, and has been praised for much of the same reasons as Jessica Jones—its representation of powerful women, or its promotion of an unapologetically feminist message.

Tonally, the shows couldn’t be more different—Supergirl is notably lighter, not just in overall genre but in the way the show itself looks. And if Supergirl is the show that’s standing in the sun, Jessica Jones is the one that lurks in the shadows, dealing with the grittier aspects of superherodom. Both Kara and Jessica face their fair share of evil—but, as we already know, evil itself wears many faces. These two superheroes are fighting the same battle, but they’re each doing it in their own way, and it doesn’t mean that one is more valued or more important than the other.

So why is one show being pitted against the other? The excitement when Supergirl originally premiered was almost palpable; the show brought in the highest premiere audience of the fall season—and everyone was equally pumped for Jessica Jones. Of course it didn’t take long for the Internet to begin weighing the two shows against one another—and some have already voiced opinions that Jessica Jones is clearly better, or that its existence means that Supergirl is less worthy of our attention. But that shouldn’t be the way we examine these shows:

Seen a few blogs say Supergirl is in danger & irrelevant after Jessica Jones. It doesn't need to be one or the other. They're different.

The idea that Supergirl is irrelevant because of Jessica Jones is what happens when you have 450 superhero things with men and 2 with women.

I don't want any of this 'Is Jessica Jones better than Supergirl?' crap because BOTH OF THEM ARE GREAT EVERYTHING WITH LADIES IS GREAT

It’s tough to not wonder: is anyone saying that Daredevil makes The Flash irrelevant? Does Matt Murdock arriving on the scene mean that Barry Allen’s story is somehow rendered less important? It’s interesting that comparisons only seem to be getting drawn between a show about a female superhero and, oh, another show that also happens to be about a female superhero.

The last thing we should be doing is pitting women against women, even if they’re fictional characters; the world does that enough as it is. The fact that we even have two female superhero shows out right now is groundbreaking. That’s what we should be redirecting the conversation towards.

So of course we need both shows. We need the hopeful optimism that Supergirl reminds us of and we need the uncompromising truths that Jessica Jones sheds a light on. Not only that? We need more shows. Supergirl and Jessica Jones are both important reminders that we’re already heading in the right direction, that there are many diverse and relevant stories that need to be represented on-screen, and that there are still more that have yet to be given a platform.

We need Supergirl, and we need Jessica Jones. End of either/or discussion.