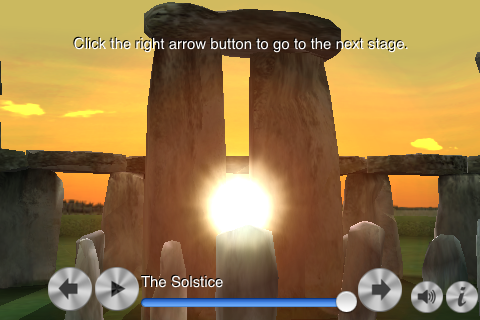 Stonehenge has been mystifying people for quite a long time, but getting to the massive circle of standing stones could pose a problem for many. Happily, the Stonehenge Experience app for iOS tackles this problem with gusto, aiming to bring you the sights and even the sounds of Stonehenge regardless of where you may be.

The app was released earlier this month for iPad, iPhone, and iPod touch by Ribui Ltd. Once activated, the app goes through several interactive vignettes explaining the arrangement of the stones, when they were erected, how we think the pillars were constructed, and so on. It’s sort of like a virtual tour of the site, being narrated by an unseen woman with a fabulous British accent.

Though the idea of a tour-in-your-pocket might sound disappointing, each “section” of the tour is interactive in some way. You can pinch and slide your view around all of the presentations, and scrub the slider back and forth to advance. In some cases, this moves time backward and forward on screen, causing stones to rise up out of the ground or the sun to move across the sky. You can also jump straight to a menu that allows you to access each segment at your leisure.

In addition to the stones themselves, the app also encompasses several nearby sites, including burials and earthworks. These are presented, Google Maps fashion, from the menu page. While light on information, the app lets you “excavate” some of these sites by swiping your finger across the screen. This is kind of silly, but does introduce the user to some of the region’s permanent residents. 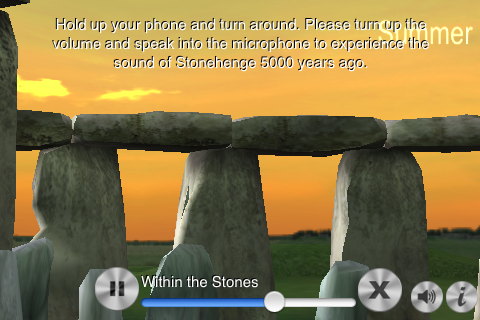 By far, the most impressive feature of the app is a 360º view of the stones from within the circle. It’s designed to deliver an alternate-reality experience, where moving your phone or iPad around changes the view. That’s pretty neat, but the Stonehenge Experience goes a step further and uses your device’s built-in microphone to deliver what the app’s creators claim is the sensation of hearing what it’s like within the stones. One of the apps designers explains:

This is by far the most fun part of the app, which seems kind of silly since it’s just an audio filter. However, it adds a level of interaction that’s surprisingly fun.

Having never been to Stonehenge, I can’t say if the app lives up to its claims of faithfully recreating the entire experience. However, I can say that I had an enjoyable time playing around with it. The actual educational content of the app seemed pretty on-mark, although I am far from an expert. That said, the $2.99 price point might seem a bit steep for a little toy like this, with limited re-use value.

If you’re looking to experience Stonehenge on a phone, I am not sure you can do much better.

(The Stonehenge Experience via New Scientist)